Middlehiem was originally spawned by my dissatisfaction with Frostgrave and a fun experiment to see if I could cobble ideas put forward in blog posts into a actual game.

Major Change
Well, Mythbusters to the contrary, I decided I couldn't polish a turd and thus deep-sixed my attempt to make the Bolt Action token activation meaningful.  (Main reason: the way Bolt Action works gives horde armies better initiative - i.e. 20 goblins would have better control over the activation/initiative than 10 elite paladins. Or in the case of Bolt Action, hordes of Russian conscripts > a few elite SS).

So I replaced it with my Momentum(tm) system (a mix between Crossfire, Warmaster and a hint of Infinity). Basically, each mini contributes a token to the order pool.  The side with momentum is the active side spending tokens to act (or reserving them for overwatch), and retains the initiative, unless...

(a) it loses opposed combat rolls - i.e lose the fight, lose the initiative (Crossfire)
(b) units fail their attempt to "follow on" by failing a Will check (Warmaster)

In practice it reminded me a bit of Song of Blades; how initiative switches throughout the turn, and Infinity in how the order pool looked.

Other Minor Tweaks
The Leader must pass a "Will" roll to order a group move.   Units who dodge bow shots must have something to actually dodge behind, or are at -2. New classes and weapons (pike, crossbow) were added.   Units "ganging up" previously would add +1 for each rank but I've changed this to an extra +1 dice added for each rank.


Crossbowmen have identical stats to archers, who has their Agility reduced.  (They Matrix-dodged too many shots last game).  Pikemen are like polearm-equipped Infantry but are -1" movement due to their unwieldy weapons.


Crossbows are similar in range to bows, but have a fixed STR (damage) compared to bows who depend on the users' STR.  They also are better at snap-shooting (no draw time) but take an action to reload.  Pikes can fight 3 deep (very useful in my crowded maps) but are best on defense and slow the user down. 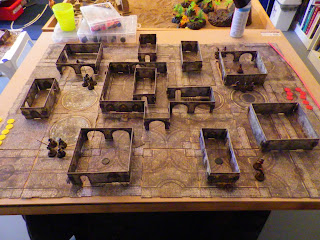 Both sides have 10 miniatures each and could setup 12" from their table edge.  The aim was ostensibly to collect the most black loot tokens by turn 5, but primary aim was (a) test activation (b) test the new classes (c) see if the other, minor rule changes (like leadership and dodge nerfs) were  working as intended. Yellow had the new pikes and crossbows, and Red had the polearms and longbows from previous playtests.

I'll put up the first two turns with explanations.  The Questions are concerns that emerged during the game.

Red won the "Momentum" and moved 6 minis (solo and in groups) before failing a Will roll and losing Momentum.  Yellow crossbowmen fired at the red archer (in cover) and missed.*  Red finished its moves and Yellow got momentum back by default*. 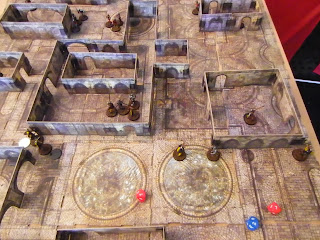 *Question A: What if Yellow fails its Will rolls? It can't lose Momentum so how else can it be punished?
Answer: I can think of a few ideas.  #1. They only get 1 action, not two (sensible, easiest) each time they fail a roll  OR  #2. They can still act, but give overwatch tokens to enemies (fun) OR #3. They may make no further actions (a bit severe, nope). FYI: I went with #1 for the remainder of the game.

Question C: Does a failure to pass a TN or hit with a shot mean you lose Momentum?
Answer: No.  You don't receive any negative effects, so there is no reason to lose Momentum.  You will, however, need to test Will next activation.

Yellow won the Momentum roll and its crossbowmen reload and again shoot at the red bowmen.  This time they score a hit, but the arrow does not penetrate.  The red archer fails his Will roll and ducks back into the doorway.  A Yellow MAA attempts to lead a charge into the central building but fails his leadership roll and goes it alone, seizing the loot token while his accompanying billmen stand around outside.*

With the Momentum back, a Red MAA orders two archers** (on top left) to shoot; both roll low and fail.  As the return fire from the Yellow crossbowmen on overwatch has no effect, they do not lose the intiative but must test Will to keep it (see Question B above).

On the right, the Red archer recovers and steps back through the doorway, firing back at the two Yellow crossbowmen who have been tormenting him.  He shoots straight but his target swiftly ducks behind the edge of the building and the shot misses.

Red has used up all their activations now and momentum switches back to Yellow who have 8(!) unused activations.  Quite a few Will rolls fail, restricting them to a single action (see Question A) but the Yellow crossbowmen in the bottom left continues his duel with his red counterpart, scoring a lucky hit with a "10".  And causing me another headache as his damage difference was enough to kill (+3) but both rolls were well under the base TN - i.e. both were fails.***  Thus ends TURN 2. 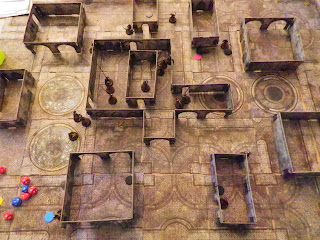 The pink token shows the red bowmen who was shot. The blue token shows a crossbowmen who is reloading. In the centre building, you can see the sh*t is about to hit the proverbial.  You can see (middle left) a group of guys who failed Will rolls, and thus could make only a single action (and are now exposed to enemy bow fire next turn.)

**Question E: What if the leader calls an action and does not join it (i.e. shoot - and he doesn't have a bow) - is his activation token "used?"
Answer: Yes, as he is spending his effort co ordinating subordinates.

**Question F: If a few things are going on (i.e. multiple shots) which order is it resolved in?
Answer: Active player (one with Momentum) decides

***Question H:  If an opposed damage roll has a big difference (enough to damage) but fails to reach the base TN...   ...does it still do damage?  I.e. a TN of 10 is needed, but attacker rolls 4+4 STR (8) vs defender with 1+4DEF (5) - enough for a +3 difference to kill a minion or wound a hero, but actually still below the required TN 10.
Answer:  Not sure.  I'll think it through a bit more.  Probably it should pass the TN to keep it in synch with the attack rolls. FYI: I allowed the "kill" to stand in the game.
But if the defense fails by a lot... it be because a weak point is hit?
Heck, should there even be an opposed roll at all (I mean, dodging the shot should be an opposed roll, but once it hits.... it might as well be a straight d10+stat vs TN)

I'll end this at TURN 2.  It shows the detailed notes I take (which is why I decline to be a proper playtester for other people's rules and simply do a one-off playtest when I "review").

I'll pick up the action from TURN 3 later, allowing me to better focus on the changes to pike and ganging-up damage.

As you can see, quite a lot is going on. I'm going to cap the warband size at 12 rather than the ~20 I had planned.  After all, I have LOTR:SBG for that scale of fighting - a ruleset I am quite satisfied with.

Activation was a big improvement.  Momentum shifted through the turn SoBH style, and it has a subdued Infinity vibe (with less aggressive reactions.)  Even better, I have completely fixed the "horde of peasants have better activation initiative than few elites" and can now punish the disorganised rabble.

Not sure if crossbows are "different" enough to normal bows.

I'd like to add a decision point - do you charge leaders into melee or sit them behind the front line where they can direct traffic?  Perhaps allow leaders not in melee to buff units morale or such when in their command radius - kinda like a Spell powered by Will.

Finally... if you wonder why I am slow to post/playest stuff... 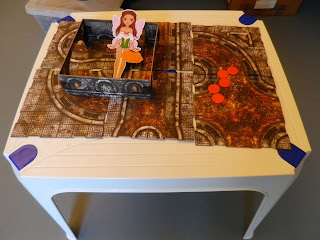 I have a certain two year old someone who shares my shed and insists on having her own table (well she doesn't insist on her own, but if she doesn't she want to share mine)....As usual, if you want to discuss things more in-depth or just look at the rules, visit the Google Group.
(There's lots of other homebrew rules there to try/contribute to as well)