This, like my 2300AD article, is a look back at some older rules that have kinda faded from sight.

For some, like AE:WW2, the fade out was merciful  (why the heck are they trying to revive it with a Kickstarter?). Others, like Battlefeet Gothic, Epic and Starship Troopers, died when other less worthy systems flourished.  Some, like Crossfire, were too "ahead of their time."  Others, like Vor and Warzone are interesting but are rather dated and 90s. Urban War and Rezolution had good qualities, but were killed off by Infinity.  Remember Mercs and their cards-based movement?

Starship Troopers (and it's spin-offs, Battlefield Evolution and World at War) are interesting. An Andy Chambers ruleset, they were allegedly his take on a more dynamic 40K, but when the powers that be opted for what became the 4th ed, he took his ideas to Mongoose instead. (Where they won an Origins award, I note).

Back in the day, I remember proxying with Space Marines and Tyrannids and being impressed with the rules, but the fugly miniatures discouraged me from "buying in" to a system that I (correctly) gauged had a limited life expectancy.

The Shiny
Well, this IS an OOP rules book, so probably not important. It is a glossy hardback with photos and art and all that but I never really was super impressed. What interested me was other stuff...

Fire Zone
A unit fires at a single "target model" - and any within an AoE radius of that target model could be attacked.  Any natural '1's discarded; and if as reaction fire, put a unit as low ammo.
Casualties are always removed closest to the firing unit first.

Target/Kill Target Numbers
Units have a "Target" and "Kill" stat which serves as their "Defence"
A normal mobile infantry has a 4+ target, and a 7+ kill.

Any dice rolling above the "Kill" number means the target may make a dodge save (if it has the "dodge" ability possessed by a few units) or be removed. Multi-wound models lose 2 wounds.

Compare remaining dice to the "Target" score. Each result that makes the target results forces a save.  A failed save means it is removed (or loses a single wound if a multi-wound model).

Basically, if it rolled above the kill stat you die outright unless you are very nimble.  If it rolls above the target stat you could roll to make an armour save.

Also, there is no traditional roll to hit, then roll to kill. There is a single damage roll.  Some heavy weapons have bonuses to their die i.e. d6+1, or use a larger dice like a d10.  Rapid fire weapons get extra dice. - an assault rifle might roll two d6s.  Again, this "one roll to hit AND damage" is common now, but back then it was pretty unusual.

Free Unlimited Overwatch (Reaction Fire)
Although IGOUGO, any unit could react (usually by shooting) against any unit acting within 10" of them.   Units had unlimited reactions, but the reaction took place AFTER the action that triggered it.   Soldiers could react individually - i.e. the bazooka guy might hold his ground and fire as the rest of his squad took cover.  In addition, for each '1' rolled in reaction, one solider is out of ammo until the start of their next turn.

Units which took a "ready" action in their own turn can carry that "readied" status over into the opponents phase, potentially using special weapons or actions in reaction.

Commanders
Units are centred on a commander, within his 6"command range; troops separated from their commander (perhaps because of recoiling due to damage) tend to stay put; though they may react by firing on enemies within range.   They remain stationary until "collected" by a commander moving within command range. 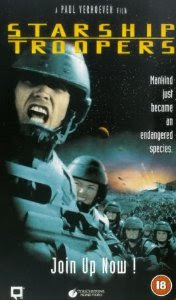 Starship Troopers somewhat tongue-in-cheek universe probably never had the depth on which to base a deep and long running gaming franchise....

Your Actions - Your Choice
At a time when many games had a regimented move-shoot-melee sequence, active units in SST could spent their two actions any order or combination they wanted - move+move, shoot+shoot, move+shoot, shoot+move, etc.

Duck from Cover
Any intervening cover within 1" of your model can be ignored if you wish - this would be the model finding windows/gaps to fire through, ducking over a wall, firing and ducking back etc.

Recoil/Knockback
Any unit taking a non-lethal hit (i.e. he passes a save) "flinches" back 2" directly away from the firer; this can cause units to lose cohesion as soldiers are forced out of the commanders' radius.

"Ready"
This is kinda a "stored" action; sometimes it boosts a action - a ready action that precedes shooting allows missed shots to be re-rolled, for example.  Some effects require a ready action to activate, such as the jump jets on a a mech suit. Units can retain their ready status until they use it (even in their opponents turn as a reaction.)

TL:DR
Elegant ammo rules, simple reactions which are unlimited but balanced, AoE-style automatic weapons based on a single "target model", commanders/unit cohesion that matters, and a single dice roll to hit AND damage.  It would have been interesting if 40K had veered in these directions back in 2004 instead of conservatively maintaining the status quo with 4th edition.

So why did SST fail?  Well, as a generic sci fi ruleset it could have worked, but it was firmly married to the Starship Troopers universe.  And let's be honest - with only humans vs bugs and a non-canon "skinnies" faction there wasn't a lot to collect, and the models weren't that great.   It never looked like a long-term project, and after all, drew from a deliberately shallow B-movie universe that was unlikely to have wide or lasting appeal.   Sure enough, after a 2005 release the SST models were dying off by 2007ish.

The rules themselves had some legs left - reappearing in various incarnations for Mongoose as the Battlefield:Evolution rules for modern combat, and the World at War WW2 variant and I suspect strongly inspired the current indie Victory Decision series which have morphed into weird-war (Gear Krieg) and sci fi (thus coming in a full circle back to its sci fi roots).

Anyway, Starship Troopers is a fascinating look at "what might have been" for 40K, and was an interesting evolution of the systems of the time, with several concepts which are only now becoming mainstream.
Posted by evilleMonkeigh at 07:28