Along with wading though the Malazan Books of the Fallen, I've also read Waking Fire whilst supposedly minding small children in various locations.

This is the first book of a new series by Anthony Ryan, who "burst onto the scene" recommended by many authors with his Raven's Shadow trilogy.  Although I was not particularly impressed with this first series (despite the fulsome praise, the books were a solid "meh" out of 10, showing signs of skill but generally hackneyed and forgettable) I decided to try Waking Fire.

I'm glad I did. Although Mr Ryan is still a tad clunky, he at least has gone for a fun world:  a steampunk-y 1900s where Wild West style "contractors" armed with repeating rifles hunt dragons for their blood.  Yep, you heard me right. 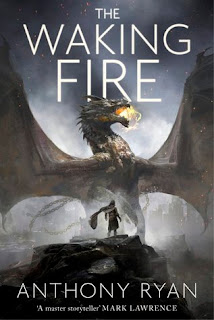 Amongst paddle steamers and six-guns, the dragons also serve as the magic system - their blood (depending on the species) can give telekinesis, pyrokinesis, and telepathy when imbibed or injected by the "blood blessed" - i.e. mages - of the world.  And they are dying out. Perhaps the quest for the legendary White Dragon can prove the answer.   The forests and wildlands, inhabited by raptor-like Green dragons and the scaly, feral "Spoiled" - a degenerate species of savage humans - give a somewhat Lost World feel.

Set against a backdrop of warring corporations and empires, with blood-blessed spies, street thugs naval officers and dragon harvesting contractors as main characters, Waking Fire is a fun book.  The hunt for the legendary "White Dragon" is a nod to Moby Dick, although the feel of the book is a cross between Sanderson's Mistborn and a "Retribution Falls" which takes itself a little more seriously.  Yes, there are also pirates.

You'd like it: If the idea of wild-west mages chugging dragons blood and dueling with telekinetic powers sounds like fun.  It you like exploring, and steampunk with an Indiana Jones/Lost World vibe. It has only a few characters so it's easier to follow than the 1000 characters that most modern fantasy books require you to keep track of.   It's definitely more sophisticated than his first series (admittedly not a high bar to beat).  Also, drinking dragon blood for magic powers makes more sense than the metal shavings of Mistborn. I mean, metal shavings? Really?

You'd pass: If you are sensitive to an occasionally clunky writing style (Mr Ryan is serviceable but distinctly not in the class of Abercrombie, Martin, Lawrence etc). If you are one of the soulless folk who think Wild West+dragons sounds silly.

Recommended: Yep.  3.5 out of 5   Skip the forgettable Raven's Shadow series, and start your journey with Mr Ryan here.
Posted by evilleMonkeigh at 03:08