The "restrospective" series is for older games that have never gained traction for some reason or other; or perhaps once-great titles now OOP.

With War Rocket, it's hard to see how it could gain much traction in the first place.  It's well-finished but quirky starships are designed to evoke Buck Rogers and Flash Gordon but have more in common with Futurama.  Dunno about you, but I suspect people wanting to paint miniatures so they can pretend to be Kiff and Zapp Brannigan to be fairly limited.  The sort of thing that might catch the imagination of those of a quirky nature (I bet it went down big on Lead Adventure Forum) but is unlikely to have widespread appeal.

I think War Rocket was trying to evoke Buck Rogers but the minis remind me more of Futurama...

Anyway, let's look at the game itself:

The Shiny
It's a slim, readable 75 pages.  The comic-style B&W illustrations do a lot more to promote the Buck Rogers vibe than the minis themselves.  There are good references and rules summaries.

Activation & Stats
The stats are simple - in fact the stats for an entire fleet (i.e. all 4 ship classes) can be noted on a single page.  Speed, Defence, and Weapon (range/arc/firepower).

1. Determine move order - move in order of slowest->fastest (break ties with d10 roll)
2. Rockets with a "delayed action" do all actions - both move and fire - now
3. Actually move rockets from #1
4. Place hit markers next to targets in range/arc of any weapons
5. Check damage - d10 roll on table
6. Remove any stun tokens from last turn
7. Take any special actions/may take a Delayed action token if qualified

Any rocket that takes no actions in one turn may take a "delayed action" turn that allows it to act with all actions (move/shoot/special) before enemies. Regard it as a overwatch-y sort of mechanic; you forfeit actions now in order to act first next turn. 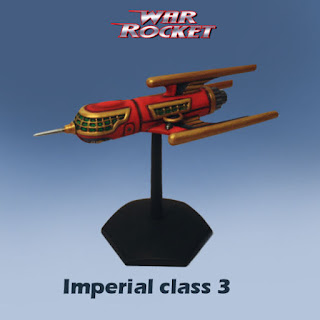 I always think "Planet Express" but I do think the minis look very well finished and produced...

Movement
You may not move at all - and a stunned rocket cannot move.  This seems a little weird in space - most space games allow for "some" inertia.  Now all 4 factions have their own unique movement mechanics.  I think this is an interesting idea to give flavour, but I'm a bit dubious about balance - we all know how well different movement worked in BFG *cough* Eldar *cough.*   Two factions are similar (Empire being just unwieldy Galacteers) but the saucers of the Zenithians and the pulse jets of the Valkeeri offer different movement styles.

Shooting
Only one weapon type?  Really?
Whilst I found movement interesting, the attack mechanics left me scratching my head.  If the aim was to reduce record keeping I wonder why they came up with the quirky shooting mechanic which seems designed to maximise the number of needless tokens/dice on the table.

Basically, your ship has a "firepower" rating which denotes how many hit tokens you can place on a target(s) within range/arc.  You count up the combined hit tokens on any given ship and cross-reference it with the target defence on a table.  A d10 roll determines if the ship is stunned (miss a turn) or destroyed.

Whilst I approve of the lack of hitpoints, the whole system is weird and does nothing that couldn't be achieved by a more vanilla, less token-y system.  Remember the article I did on "why your great idea may not be great?"  I have a feeling this falls into that category.

Also, I'm not sold on tracking your stun from turn to turn (the "delayed action" kinda confuses things).

Terrain, Scenarios, Customisation & Stuff
There are rules for asteroids, wormholes and nebulae, and 9 scenarios.   There are special rules for ramming, docking, minefields and boarding combat, along with freighters, space stations and gun emplacements.

There are some customization options - which mostly involve slight boosts to speed or firepower, or similar - as well as "defects" which reduce the same.  This gives some interest to the otherwise bland fleet lineups, (oh wait, I lied - there are torpedoes as a special optional extra, but they act just like kamikaze rockets, and you can lay mines - but there isn't a whole lot of unique or interesting stuff)

War Rocket is both a niche and somewhat limited product. It seemed simple, quirky and fun, but I couldn't see it being more than a one-trick pony with limited shelf life. Lack of more than one meaningful weapon type, limiting the four races to to four similar simplistic classes (class 1 to 4), and limited customization/no shipbuilder tends to focus players on the minis and universe provided - which does not appeal to everyone.  Different movement systems and the delayed action idea was the most interesting, though the shooting mechanics seemed weird.  Whilst the minis look well-produced, aiming the game squarely at Futurama-style pulp automatically put a low cap on the potential audience.  Given that X-Wing has since become the current best-selling miniatures game, and at the time it came out, Silent Death had not had any challengers since the early 90s,  I'd put War Rocket down as a missed opportunity.

Recommended: Not particularly, not unless you really love the ships. I don't see it being a long-term gaming staple and after a few playtests I shelved them, and decided against getting the minis (only the Zenithian saucers had even vague appeal anyway).  I was optomistic about this game - but found this game (and minis) just struck the wrong notes for me.*

(*Which is weird, for someone who avidly collects Quar - the very definition of wargaming quirky...)
Posted by evilleMonkeigh at 06:02