Looking at my painting habits, I've decided I tend to enjoy easy hobby jobs; while I have hundreds of fiddly and intricate Infinity minis unpainted, I tend to energetically paint any 15mm or smaller forces.  In 28mm, I'm always on track with any heroic Warmachine minis with their easy-to-paint chunky detail.  In short - I like easy jobs, and dislike long drawn out ones.  Last Christmas I made the mistake of trying the hardest job first - assembling Robotech minis that after a few hours of frustration put me off all hobby related activity for two months.

So having realised I like to pick the low-hanging fruit, I've decided to get painting again. Whilst I dislike unpainted minis in any form (nude minis shouldn't be allowed out in public) I've often said "any paint job is good enough." So I decided to test the theory.  Just how fast could I go - and what level of paint job would I accept? Inspired by the decidedly average paint jobs in the DeAgnostini LOTR magazines I've perused this week*, I decided to see just how quick and nasty I could be.  (*I'm one of those people who get discouraged by an amazing Angel Giraldez mini, and tend to say "bugger that" when some painting article advocates 7 thinned coats to get the "right" shade of blue on a shoulder pauldroon - what inspires me most is average-to-good paint jobs that DO NOT use the default studio colour scheme like 99% of the lemmings gaming populace...)

Most blogs showcase amazing paint jobs.  I'm going to buck the trend. The aim is to be fast - with about 2-3 minutes maximum per model.  Grabbing some plastic Mage Knight clix (already rebased and undercoated) I decided to limit myself to ~4 colours, with minimal detail, few coats, and washes highlights only when vitally necessary.

I drybrushed red gore over the base, then drybrushed flesh over the red gore.  Drybrushing not only shows detail, but means the paint was dry for the next coat quickly.  My concession to detail was to dab some bone as claws, teeth and ribs, and a yellow dot for an eye (I should have gone green eyes to contrast better). I tidied up the tentacles with more red gore. Thus having  finished 7 minis in 20 minutes, I devoted the remaining 5 to sprinkling some playground sand on the bases.  As a bonus, I only used shaggy old brushes. Windsor and Newton can kiss my patoot. 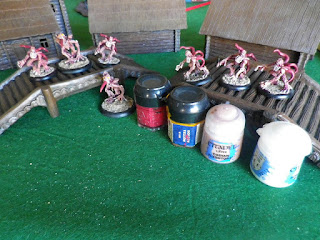 I quite like Mage Knight/Heroclix - I rebase them as needed and they fill out many a pulp or fantasy army.  Most sculpts are actually quite good, though there are freaks of nature amongst them. 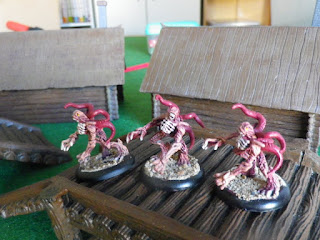 The tentacle-thingies were originally dark green clix, but I wanted a "fleshcrafted abomination" feel. They will serve many roles in pulp and fantasy games. 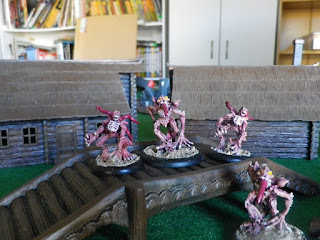 The bridge is from a cheap $10 pack of dinosaurs. It goes alright with the Zvezda log cabins and also was painted at super-speed.

I thought the result was tabletop-worthy, so cheered up, I decided to start on the dinosaurs I undercoated ages back (I plan to marry them with mounted Perry knights to make psychic-knights-on-dinosaurs).  This time, I decided to use only two colours. And nasty craft paints from the local $2 shop.  As I paid less than $1 per dino, using GW paint would mean the paintjobs would be pricier than the mini itself. 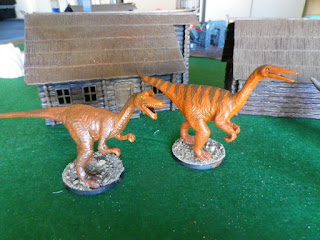 I intended to add detail to the dinos but only got as far as eyes when children intervened/my 20 minutes ran out. (I also based them in that time) I'll paint the teeth and claws the same bone as the last models when time permits.  The stripey ones are a bit shiny (though less IRL than the photo) - I may wash them with a watery mix of the darker paint like I did the one on the left. 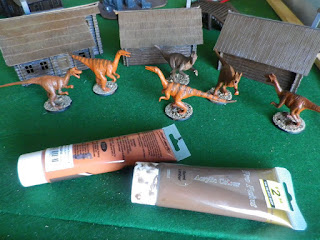 The challenge was only to use two colours of craft paint.  I think the result is serviceable for gaming purposes.

I think there are other things that could add value with little effort - some rocks and grass tufts to the bases, which could painted with a thinned layer of craft paint to make the base a little less desert-y and a little more multipurpose.

Anyway, I hope this will inspire fellow painters who are time poor.  Your painting doesn't need to be perfect to be table-worthy.  Sometimes you don't need to "do your best."  Corners can be cut.  Just grab some minis, push your OCD to one side, and stick some paint on the suckers!
Posted by evilleMonkeigh at 00:20