I don't have the time for a big review post, but I have kept busy hobby-wise of late.

More on Painting...
I've continued my craze of "cheap and nasty" painting. I hunt up minis that look easy to paint, and aim to spend no more than ~3min each on them, from basecoat to basing.  I am even deliberately using cruddy old brushes which I seldom bother to rinse.  I call it "ghetto painting" and it makes me feel like a rebel.  Actually, I'm now questioning why I bother to paint the underside of that wizard's robe...   ....I mean, no one can see from tabletop range and anyone picking up a 28mm wizard to look up its robe is either (a) seriously disturbed or (b) holding it at such close range other painting flaws are going to be obvious anyway.  Also, I am no longer painting the inside of shields.  Yes, for those who paint their shields separately and attach them at the end... honestly, who notices?  I've decided I am going to be at peace with myself, and paint a crapton of minis. 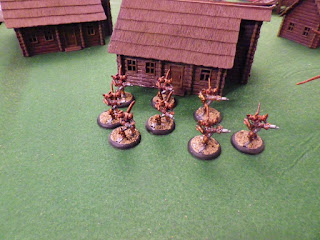 These Mage Knight golems got a metal undercoat, brass armour, and a brown wash to dull the brass. Red eye-lenses, and a brown gun-stock were the only details.  I'd like a better contrasting eye, but my bright red went gluggy.  If I had more time: I'd highlight the brass with gold, and maybe put some contrast colours on the gun and "dorsal fin."  Total time: 25min (+5 min to base)

Golem Arcana - Smartphone Wargame
I often wonder how smartphone integration could be used.  Golem Arcana goes a bit further than I envisioned - using small magnetic dots on the board and on the minis, it also tracks the models' real-world location in the app.  You can interface between the digital app and the board with a bluetooth stylus.  The odds to hit are pre-calculated, and the dice are rolled for you.   Missions, events and objectives can be triggered by the app.  You can have conversations with NPCs on the tabletop.  Finally a good way to do hidden movement?    Interestingly, the armies are lead by knights digital characters who exist only in the app.  Knights command a golem each, the golems actually being the piece on the map.  Ancient ones can be summoned, also digital-only creatures who can grant powers.    The game explains all possible moves, and hit moves, as well as explaining any special abilitie or attacks - the end of the need for rulebooks?  After I spent time poring over their kickstarter, I came across this review which kinda sums up the key points.  The developer (Harebrained Studios) did the very successful and well-regarded Shadowrun PC game and is working on a Battletech game which I will be very interested in when released.  In short, I'm not racing out to buy Golem Arcana (mostly due to pricing) but I'll be interested to see what the future holds. 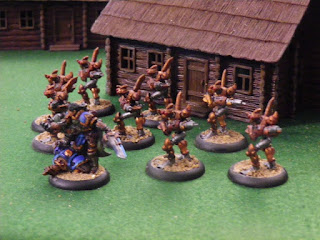 If necessity is the mother of invention, then poverty is the father....  ....these Mage Knight golems will go with my Warmachine forces as I simply cannot afford the PP stuff anymore. Once, at $30 a pack of 6, I would buy a random pack for a fun project.  Now, it's climbed to $50-$70 for the same amount of minis - GW territory. Plus, I did not appreciate the shift from metal to plastic. I'm sure it's for the benefit of the shareholders modellers.... 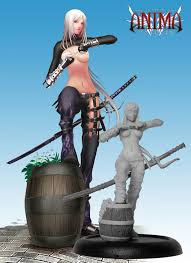 Anima Tactics recently was withdrawn by its parent company.  A small scale skirmish game with anime/RPG overtones, I have never got into it despite owning the rules for a decade...

Anima Tactics - Restrospective Thoughts
As this game was recently "wound up" by Cipher Studios, I dug out my rules to see what I had been missing...

This rulebook is too dense to do a full detailed "restrospective review" (unless folk are really interested) but I've been looking through the rules again of late.  Arriving at about the same time locally as both Infinity and Warmachine, I never got into it - it was even more complicated than the former and seemed to have the CCG feel of the latter.  Besides I'm not a huge anime fan - anime, like rap culture, seems to be purpose-designed for/by 12 year old boys.  The art style is a bit hit and miss, but generally is good and the rulebook is very glossy and well produced in full colour hardback - definitely AAA quality.

Aimed at ~4-8 minis, in the games I spectated back in the day, it seemed quite tactical and deep due to managing the many powers and abilities each mini has.  Each mini is a "hero" with their own hitpoints (boo) and mana and action points to control.   The minis seemed awesome for modern pulp (with many Illuminati with katanas and priests with miniguns) but as they are finescale 28mm* like Infinity they don't really go with any other conventional 28mm stuff. (*I'm not going to say "realistic" proportions in regards to any mini line containing a size 4 girl with DD boobs wielding a sword bigger and heavier than herself)

The interesting bit about the rules, I think, was how it used a "reaction" system of sorts, mixed with a action-point system.  Only certain actions were allowable as reactions (usual dodge/counterattack), and any action points you spent reacting were deducted off your own turn. Reactions occurred at either the start or end of an enemy turn, which removed much of the complication a la Infinity "everything happens simultaneously."  Also at the time I liked the use of d10 over Infinity's d20 which I think "swings" too wildly.  The energy system adds a nice element of resource management - if you spend it all on special attacks and combos, you may be left vulnerable and unable to defend against enemies. Coming back after all these years, the rules are not as dense as I first thought - it's the 101 special powers and abilities that are offputting. It's very much a RPG-mini game hybrid, and many characters seem to fit RPG "support-buff"  "tank"  "dps glasscannon" archetypes. (I think it is based off a RPG?)  From a gaming point of view, it's most like Warmachine in it's CCG-y feel, in that every model is a warcaster.

Why I never really got into it: Besides the finescale sculpts, the use of hitpoints is acceptable I guess at such a small scale, but I dislike the "everyone-is-a-named-hero" which (for me) kinda handicaps your own creativity, and I am not a fan of the presence of anime-y underage-looking teens in short pants and crop tops. In addition, the many, many unique special rules and powers gives a steep "buy in" akin to latter day Infinity, Warmachine etc.  Also, the ridiculously involved backstories with bio inclusions such as "likes - pizza"  "dislikes - his archrival Frederik" which seemed kinda kiddy - the bios and character sheets reminded me of a teenager designing their own superheroes.

Verdict:  Some depth in the mana-combos-CCG style and some nice sculpts; too teen-anime in style; whilst the rules themselves aren't too tricky, the special rules make the buy-in a bit too steep for my level of interest.  Still a "nope" for me. 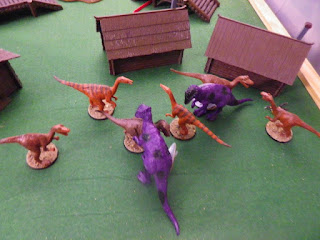 If you really don't care so much about painting, why not use prepainted minis?
I think these prepainted toy dinosaurs answer the question.... I think 3min with some craft paint is time well spent....   ....also, I like the ability to do something outside the usual studio paint scheme.
Posted by evilleMonkeigh at 05:02