I've already discussed how the World of Darkness seems ripe for skirmish wargaming, and I thought I'd have a specific look at Vampire the Masquerade as it's currently $5 for the 20th anniversary edition at Wargame Vault.    Note - I'm a wargamer with 0 interest and experience in pen-and-paper RPGs. So if you are looking for a review on how good an RPG it is, I recommend you go elsewhere.  I'm merely interested in how it can be adapted to/used as wargaming inspiration.

The Shiny
It's a pdf so there's a limit on how nice it is.  The art is mostly good, albeit inconsistent (though it veers between stylish and childish), though the white background is a bit glare-y on a laptop screen. It's 530 pages - so printing it out will fell a small sized forest.  The index at the end is pretty thorough and consistently got me what I was looking for.

Why Vampires?
Whilst vampire minis are usually fantasy-centric (there's surprisingly few dedicated "modern" vampire minis) it is simple enough to convert normal human minis to vampires merely with a careful paintjob or maybe a head swap (I am eyeing some of my Mantic ghoul spare heads).

In V:tM there is a reason for combat (sects, covens or clans battling each other over centuries, even millennia) and it occurs at skirmish wargaming scale as it is covert in nature (vampires hiding their existence from humans).  So lots of covert-ops skirmish material.  There are fleshed out backgrounds for the 13 different clans, from the Followers of Set (who protect secret places and hunt hidden knowledge) to bestial Gangrel, to the Giovanni (who control banking).  Vampires are territorial about their domains.  Thus there are plenty of motive and background for battles.

The vampires range from fledglings not much stronger or more capable than humans, to vampire elders with immense and terrifying powers.   There is crossover potential with other WoD staples - werewolves (which in combat tend to outclass younger vampires handily) and human mages (who are fragile mortals but wield potent magic). 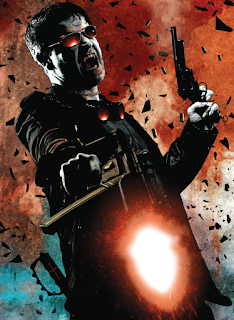 The vampires from Underworld and Blade owe a lot to the World of Darkness.

Character Creation
The more relevant physical stats (strength-dexterity-stamina-health) would work fine for wargames, although social skills (charisma, appearance, manipulation) and mental skills (perception, intelligence, wits) would certainly be culled or amalgamated for a wargame.  Injury stages (hurt/injured/wounded/mauled/crippled) with negative modifiers make sense, as a vampire would be a multi-wound model in most wargames.  Both willpower and a "blood pool" provides resource management systems.
There are ~30 core special rules (talents, skills and knowledge). Vampires can start out at different power levels which fits with Necromunda-style campaign games (juves, gangers, leaders).

Thaumurgy
This is blood magic or vampire sorcery.  Powers include:
Boiling victim's blood, animate objects or plants, summon elementals, decay/distintegrate, telekinesis, weather control, boosting combat and even projecting consciousness over the net. There are rituals which take longer to prepare or require specific resources but are longer lasting or more powerful, such as warding circles etc.  Whilst vampire sorcerers are fine, to be honest, I thought a lot of these seemed un-vampire-y (I mean, a vampire using water magic?  undead = masters of water? Really?)  You could probably skip this as there are more than enough powers and paranormal abilities in the disciplines section.

Mechanics, Actions and Combat
I'm not going to discuss the game mechanics in depth as they have little wargaming application.  In a nutshell: you generally roll a pool of d10 (the amount of dice varies according to skill) against a target number between 3 and 9 - which varies according to difficulty - a 6 is standard difficulty, a easy or trivial task might be a 3 or 4, and very tricky tasks might be a 8 or 9.  Only one success is needed to pass, but 3 or more successes are a complete success.  Any roll of '0' is an auto success, and any '1' cancels out a success. Whilst you could wargame with them, it would take significant effort and dice chugging.  However, they could be easily adapted to something like Savage Worlds which is very wargame-friendly.  You could adapt V:tM into most generic skirmish games by simply modifying stats or adding in a few distinctive special rules.

Morality
While a key tenet of roleplaying (retaining humanity, struggling against the beast within), the degeneration of morality is of limited use to a wargamer.  The "paths" and ethics a vampire can follow are of interest from a background point of view I suppose but I kinda skipped through this to be honest.

The Others
This gives a background on peripheral groups - witch hunters, the Inquisition, the CIA/NSA, paranormal researchers, crime bosses, cultists and magi of various types, the fae, ghosts, demons (Fallen)   ...as well as their traditional werewolf enemies, and a modest bestiary of conventional creatures.

There are also additonal vampire bloodlines - expansions on the 13 clans - which I presume are gathered from various sourcebooks for the 20th anniversary edition.  Some come with their own disciplines and magics.

....400 or so pages in, "RPG fatigue" has set in. Every time I think wargames rules are chaotic, bloated and disorganised...   ...I come across a RPG book.  I swear, RPG writers are 99% vivid imagination and 1% practicality and common sense.  Probably because RPGs are the opposite of competitive, and "making it up as you go along" is encouraged, RPG books tend to be chaotic experiences. Protracted reading of RPGs and supplements always gives me a slight tic....

Ghouls
These are humans fed vampire blood, who gain some portion of supernatural power.  They usually are about twice as strong as normal humans, and usually possess low level powers in one vampire discipline possessed by their donor.  In a wargame, these would work well as secondary characters. Like vampires, they can heal and regenerate (using a small blood pool.)   Whilst ghouls tend to be attached to particular vampires, some are independent and others belong to revenant families (in which ghouldom is hereditary).

TL:DR
The World of Darkness vampires have pretty much set the benchmark for the modern vampires of Blade and Underworld (the latter bearing so many similarities it was sued by White Wolf).
Accordingly, V:tM is a very handy source of vampire background and material.

Whilst not suited to wargaming with "off the shelf", the list of spells and powers is useful - the 'disciplines' list could be easily adapted to generic Savage Worlds spells, for example. The background gives good inspiration for battles and the small-scale covert-ops battles between rival covens, werewolves, mages, government forces and secret societies seems tailor made for skirmish war gaming.  All in all, V:tM is a very useful vampire "sourcebook" to direct and inspire paranormal wargames.

Recommended: For $5, absolutely.  I've pdfs of Werewolf:The Forsaken, Vampire: The Requiem and Mage: The Awakening.  Of the three, the Vampire books seem to lend themselves most easily to wargaming purposes (the magic system in Mage was a bit too open ended - and you might as well just use any existing wargaming magic system; the Werewolves book was a bit too mystical  - more like shamanistic ghostbusters than actual, you know, werewolves. Vampire is a bit more "tight" - if it's possible to apply that term to a RPG - and has inbuilt reasons to fight battles)
Posted by evilleMonkeigh at 03:31