This is a game that will polarise opinion among air gamers.

Most air war games fall into two categories - the guessing game ones (where you secretly choose from a set of maneuvers and simultaneously carry them out) and the others.

This is definitely one of the others.  The Lardies games seem to follow their own path. A few characteristics of their games is random card activation, use of 'blinds' or markers that stand for hidden units, buckets of dice for hits and damage; and a lack of unified core game mechanic.  This latter can be good (in that specific rules are precisely tailored to the situation or the period) and bad (in that the books can sometimes read like a random collection of house rules thrown together.)  All these are apparent in Bag the Hun.

They set out a rationale in that altitude, fighting in formation are very important, and that unspotted enemies have a distinct advantage.  This is unarguable, but it is how they go about reproducing it in their game that is somewhat unusual. 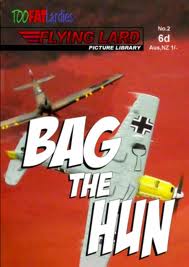 A well priced rulebook which packs a lot of content into its slim size.

The Shiny
A softcover 70 page rulebook, very reasonably priced at $23.  Sensibly laid out with a small amount of nice B&W artwork.  There are a lot of tables and each section seems to have its own unique rules and tables as there is no 'core' gameplay mechanic per se.

Aircraft & Pilots
Aircraft are rated by speed, maneuverability, altitude ceiling, rate of climb, robustness, size and firepower.   Speed is rather granular in 50mph increments, and maneuverability has more to do with the ability to avoid enemy fire than actually perform different maneuvers. This is very different to "Wings of War" where your maneuverability type determines the maneuvers you can do.  In BtH, all fighter type planes can perform similar maneuvers; with pilot skill being the determining factor in if they succeed or not.

Pilots are rated as "Sprogs" "Regulars"  "Veterans"  "Junior Aces" and "Top Aces". These all have negative or positive modifiers for die rolls, but Aces have some very distinct advantages.

Turn Sequence, Cards, Initative
This is the controversial bit and contains the best and the worst bits of BtH.  Aircraft sections (groups of 2-4 planes) are assigned a card for movement and a card for firing and these are shuffled into a deck.

In addition, there is a card for bogeys (unspotted aircraft) and altitude bonus card (a bonus activation for the highest-flying aircraft section) and a formation bonus card (one per side, can be used by aircraft in formation). There are also cards that activate flak and ground and naval units.

Top and junior aces also have their own cards that allow them bonus activations.

The Good
The random card activation is brilliant in some ways - it is great for solo gaming, and it simulates the random, chaotic nature of dogfights - you may draw a "move" card for a fighter and line up a shot on a foe, only for the enemy aircraft to get its "move" card and escape before you can draw your"fire" card.  Aces having extra cards and thus more activations simulates their added tactical awareness.

The Bad
However the attempt to give move bonuses to aircraft in formation or at high altitude feels contrived.  Giving a complete extra bonus move effectively doubles a unit's speed.  So one of the formations on each side, for example, can effectively fly at double the normal aircraft speed.  I know it is to encourage historical practices such as flying in formation and seeking altitude advantage, but it feels 'off'.  I like gameplay > rivet counting but this is kinda like an arcade game i.e. "fly high to get a bonus speed boost powerup".  I understand they have done it to give tactical advantage, but it feels naggingly 'wrong' and there has to be better ways to advantage aircraft besides flat out doubling their speed.  Extra abilities to spot and fire are a great idea as they simulate greater awareness and reflexes. Doubling an aircraft's top speed is NOT something a real pilot can do, no matter what his skills.

Bogeys/Blinds & Spotting
No Lardies game would be complete without "blinds" - tokens that stand in for unspotted units.  All bogeys have a uniform speed (which may actually exceed the true aircraft speed and simulates the tactical advantage unspotted aircraft have.)

Bogeys cannot be fired at unless they are spotted and can bounce enemies and shoot them down without being spotted if they position themselves well.

Formations
These are historically accurate - the "finger four" offers more flexibility than the three-plane "vic", for example.

Movement & Maneuvers
The game requires hexes which may be a turn-off to some. The six altitude bands used are easily tracked with a micro d6 (which you can easily get from EM4) which is easier and cheaper than the fancy flight stands required by some games.

Aircraft add 1d4 to their speed rating to get their movement allowance for the turn.  Better pilots and aces can control their movement more precisely than rookies.  I like the element of uncertainty added by the dice roll, which takes away from the laser-like precision allowed in other aerial games.

Pilots must pass a test if they are "tricky" or "hard" maneuvers.  A failure to pass means they fly dead straight and have broken formation. Some tricky or hard maneuvers require a minimum maneuver rating - which would stop a four engine bomber (maneuver 2) from performing a barrel roll (maneuver 3 requirement).

Some maneuvers are historical (Thach weave, Lufbery circle) but most are universal i.e. snap rolls, immelmans, split-s and chandelle. 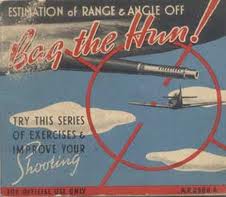 Naming the game after a wartime combat guide is very restrained...  ..compared to other Lardie titles such as "Algernon Pulls it Off" and "Troops, Weapons & Tactics".

Combat
Aircraft to the rear of an enemy target may make a "getting on the tail" contested roll.  If passed, it can be repositioned dead astern of the target.  The attacker can then choose to ignore his movement card and simply moves after the defender until he is shaken off.

Deflection to the target determines the length of the burst that can be aimed at it. Head on attacks only allow very short snap-shots while rear attacks allow the targets to be hosed with long bursts of fire.

Firing is done by the 'buckets of dice' appraoch with dice being added or subtracted for factors like burst length or pilot skill. Guns can jam and ammo can run out.  I think the ammo mechanic could have been simplified to avoid record keeping i.e. on a roll where '1's exceed a certain limit (i.e. triples) then there is only 1 turn of ammo remaining. I like how pilots with a wingman get a bonus to firing which shows how he can concentrate better when he knows someone is guarding his tail.  This is a good way to benefit formations, not giving a double move.

Air gunners have their own firing procedure and modifiers which is good in that it is specifically tailored to them, and bad in that is an extra complication, with a new table and modifiers to keep track of.

Since minor damage means no lasting damage effect, for gameplay purposes it seems a pointless inclusion.

After all that, you now have to roll on the actual critical damage table. This is modified based on the amount of engines and if the damage was really really critical or simply critical.  So far, so clunky, but the damage effects impact specific systems and sometimes have effects lasting several turns.

This is a real bummer, as apart from the ammunition tracking (which could be easily house-ruled away) and unavoidable altitude levels (easily noted by a d6 microdice blu-tacked to the base) the game is blissfully free of record keeping and written orders and the like that often plague air games.

Damage is very specific (instrument, engine and aileron/wing damage, pilot wounds, fuel line hit, fires of various severity....). Some will love this detail; but I would have been contented with engine damage or airframe damage like Check Your Six.

Pilots of damaged aircraft can escape on a "bail out" card which is included in the activation deck.

Other Stuff
Air to air rockets, flak, ground target and shipping rules are included. Bombing, torpedo and strafing attacks are detailed. Jets and doodlebug rules are included.  These make the game, like it's sister game, Sharpe Practice, surprisingly complete for its size.  This is very impressive, but each extra addition has its own unique rules, which is a little irritating as the rulebook has few 'universal' rules.  I.e. in "Savage Worlds" and Ambush Alley games you  have different die sizes and usually need to beat a 4+ to succeed; and in contested rolls you aimed to beat your opponent.  In DP9 games you roll 1-3 dice and choose the best roll to either beat a target number or an enemy roll.  These rules were universal to all aspects of the games.  In BtH the rules vary from one section to the next, making the whole rulebook read like a mish-mash of house rules thrown together into a semi-unified whole. I like this ruleset like I love a baby with a full diaper.  My love for the baby outweighs the concerns about the diaper, but it still doesn't stop me wishing someone would change the darn diaper.

The Lardies have an active yahoo group and blog and are very active, helpful members of the online community.  There are plenty of extra house rules out there and variants for Korea and missile era combat in their "Specials" which are also packed full of useful scenarios and ideas.


TL:DR
The Lardies have strong design philosophies that may grate with air wargame traditionalists. The movement rules, use of bogeys and card activation are great; though I am not keen on the "bonus movement" cards which double aircraft speed.  The damage rules are little clunky and add recording to an otherwise fast-playing, uncluttered game.  If they were more streamlined BtH would be the best game out there for fighting larger actions but like Luft Krieg they could not resist adding the extra rivets to count. The rulebook sometimes seems a collection of individual house rules, rather than a coherent whole. Definitely the best of the non 'guessing game' (WoW, CY6) rulesets, but I don't have the unalloyed praise for this like I do for Sharpe Practice.  I also feel the game was originally designed for the 1939-1942 period (with Battle of Britain in particular in mind) as late-war aircraft are very 'samey' and there is little provision to differentiate them from each other.  A very complete rule-set that covers all aspects of aerial war in WW2, and if you want to control more than 1-2 planes this game is the best out there. The card activation mechanic makes it excellent for solo play.  Recommended.
Posted by evilleMonkeigh at 05:38