These are one of the more popular Lardies offerings besides IABSM (their WW2 ruleset) and I thought they would be a good starting off point for my first Napoleanic foray.  The most popular google review was this one (a cool batrep - in 6mm! -check it out) so I thought I would put out a more detailed offering. 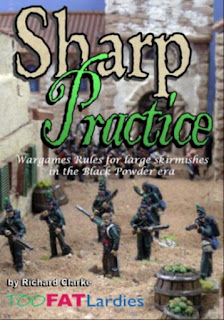 The Shiny
Simply a slim softcover rulebook. B&W interior. Limited diagrams and illustrations - to wit, nothing I couldn't reproduce with MS Word at home.  However I do like the quick reference guide being ON the actual back cover of the book, rather an appendix within the book. This means the rulebook itself can be used as the quick reference without bending the book open constantly or having to photocopy and laminate it.

It also has a decent index which is good as TFL games can be a tad random at times in where they place information.

May I say now that as like most TFL games this is NOT a competitive ruleset. There are many, many, grey areas in the rules and the authors actively encourage house rules. This is probably not the ruleset you would use to introduce your ultra-competitive 40k or Warmachine mates to Napoleanics.

Initiative/Move Order
This is a TFL game so of course it will be card based.  "Big Men" (heroic leaders) each have a card which when drawn allows them to make heroic actions rather like GW's LOTR game.  There are also a number of  extra cards that allows additional actions if the next Big Man is high enough ranked to use them.

The "Tiffin" card ends the turn when drawn, whether or not all the Big Men have made their action.  This adds a lot of uncertainty to the game.  After the Tiffin card is played units who have not been activated by Big Men may act, albeit in a reduced capacity.

Units have "action die" which allow them to move, shoot, reload etc.  These can be increased or modified by Big Men.

There are optional 'random event' cards which include things like running low on ammunition and bonus moves to the Big Man slipping in dog poop.  (No, I am not kidding)

Big Men
These may get extra activations and command troops over a wider radius, the higher level they are.  They can inspire groups of troops (usually 10-15 troops) or control larger formations.  The game is aimed at between 30-120 figures.

Movement & Blinds
The TFL staple, the "blind" is used again.  This is a blank 6 x 4" card that stands for a unit that has not been spotted by enemies. These work better than a usual unit as it is presumed troops out of contact with the enemy are easier to organise. Once blinds are spotted they are replaced by their actual unit and treated as normal.

Each action dice spent gives 1d6 movement, modified by various factors. This makes movement somewhat random and is typical of TFL games in allowing general control to the player but taking away godlike precision in maneuvers.

Firing & Combat
Hits are caused on 5s and 6s in a 'bucket of dice' approach.  Dice are added or subtracted from the group as modifiers dictate.  Hits rarely kill but tend to suppress & pin aka "Shock."  When shock hits exceed the number of troops they usually bottle out and retreat on the "Tiffin" card.   Big Men can be wounded individually at varying levels of severity.  Fisticuffs works on a similar system.

Tasks & Derring Do
There is a RPG-lite element where Big Men can perform tasks like cracking a safe, break down a door - or remove a lady's corset!  They may also attempt feats of derring-do (swinging from chandeliers etc) if they pass an agreed-upon roll, and attempt to woo ladies (having a "face like a pig's backside" is a -2 modifier btw).   "Chosen Men" can be designated as snipers to take out specific targets, and "sneaky" characters can cosh sentries and pick pockets (!)

Extra Stuff
For a small 68-page rulebook it is surprising what has been packed into it.  Irregulars (including Indians) with jezzails and blowpipes are catered for. I was impressed with the inclusion of small boat, grappling and boarding rules.  There is rules for volleyguns and blundebuses, nightfighting and looting. The book has a wider scope than you might suspect.

Creating Big Men
Another RPG-lite element is the ability to roll to create random Big Men.  Will he be a strapping fellow or a sickly cove?  A handsome devil or a hideous freak?  Will he be popular with his men or universally despised?  He could be well bred, a swordsman, or a novice in the saddle.  He might be chivalrous or a cad.
There is even a small traits list such as "Charismatic"  "Athlete" or "Lush" (the latter is over-fond of the bottle and will fall asleep after a light wound).

Appendixes
This had a lot of historical information about formations that made my eyes glaze over somewhat but would doubtless have a Napoleanic buff nodding in agreement. Optional "National traits" add flavour to forces - allowing naton-specific special maneuvers and actions to be performed; from the Russian ability to soak up more shock to the Prussians having a superior first volley.  Finally there are some useful gameplay examples to round off this section, with each main area of the rules covered.

As an aside, the Lardies Webpage contains links to a very active community of players.

TL: DR
A surprisingly complete toolbox to recreate Napoleanic adventures from your Sharpe or Hornblower box set. Typical TFL quirkiness and unpredictability with less god-like control than many similar games.  Heroic "Big Men" can take on almost RPG-like personas and I can see how linked scenarios could create a series of intriguing skirmishes.  Rather vague "house rule" approach to rules (not a "tight" competitive ruleset by any means) means a laid-back gaming partner or an umpire would be useful.

Recommend?  Definitely.  I am not a Napoleanic buff by any means but these rules have inspired me to start hunting out miniatures.
Posted by evilleMonkeigh at 20:17