I am a bit of a fan of dice pool mechanics for skirmish games.  Note "dice pool" not "dice bucket."

These can be assigned to attack or defence, adding decison-making and tactics to the melee, rather than simply pushing a mini next to another and rolling dice on a chart.  A kind of simple resource management.

Players might need to defend frantically until reinforcements arrive, or all-out attack to maximise the chance of wounds to breaking through a troll's tough hide.

A few games, such as Makatishi's CROM beta rules, Confrontation 3 or the Bushido rules use these.


CROM
A homebrew game for playing Conan adventures (but could be adapted for any fantasy).

Players have 3 dice pools: one to move,  one to attack, and one to use for special actions like magic.  Dice can either be rolled or totalled or "burned". You can choose how many dice you attack or defend with. Hits are scored if attack totals exceed defence totals.

Players can lose dice by taking hits, or by "burning" dice.  Burning a dice means it automatically counts as 6 but is lost for the rest of the game (due to over-exertion).  Hits are recorded by removing dice from the dice pool.

These rules are incomplete but have a pleasing degree of resource management.  You can definitely see potential in the concept.  Far more strategy than simply pushing your model alongside theirs and chugging some dice. 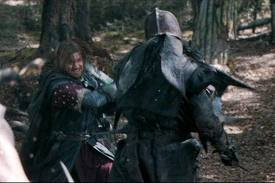 
BUSHIDO the GAME
This is a game with very nice models I have considered long and hard about investing in. I decided against as (a) there seems to be a lot of special rules  (b) there is no campaign system  (c) factions are very limited and there is no unit builder to allow you to BYO.  Basically, a Malifaux-like game that I would have to buy or build Oriental terrain for, a game  in which everyone has the same, identically-painted models (as there is about a dozen models per faction and 90% of gamers seem unable to think up a paint scheme that deviates from the studio one).   Also they have hitpoints.

But they do have a dice pool.  Players allocate dice secretly to attack or defence.  The combat dice pool is reduced if model is sprinting, frightened, ambushed etc. Players compare the highest attack to the highest defence.  The success level is then cross refererenced with a d6 roll to see how many hitpoints (blergh!) are lost (p.21 of the quickstart rules linked above).

CONFRONTATION 3
Ironically I don't play C3 with my metal C3 minis but Song of Blades instead (it is easier to play with new players); but the C3 mechanic is possibly the best of all.

Like Bushido, each player has a pool of combat dice.  He gets an extra dice each opponent he is facing.  So a player with 2 dice facing 2 opponents would have 4 combat dice.

Players roll for initiative (initiative + d6) and the loser must assign dice first. The side that won the initiative attacks first.

In a 1-on-1 duel, a player must attack with 1 dice as long as he has one.  No matter how many attack dice, only a single attack is made - using more dice simply improves your chance of success.If you are outnumbered, you choose which enemies to attack.

If a defender uses as many die in defence as he did in attack he can use "sustained defence" - he must beat any attack roll by 2.  He may then use the defensive dice again against any other opponents in the combat, each time having to beat his opponents by 2 to parry.

The damage is a little clunky but give hit locations and varying damage with the only record-keeping being a coloured token beside the model.


APPLICATIONS
GW's red-headed stepchild of its 'Holy Trinity" - Lord of the Rings - uses multiple attack dice for heroes.
Both sides roll their dice -the highest one wins, with the better fighter winning ties.

They allow you to double your dice if you choose 'all out defence' - increasing your chance of beating your foe the expense of being unable to actually damage them.  Weapons with two-handed capabilites can -1 off die rolls but add +1 to damage.

This offers some modest flexibility but could be adapted to be far more tactical.  A somewhat bland game, LOTR is a prime candidate for a dice pool makeover.

"LOTR meets Confrontation"
Players get their usual number of attacks PLUS one per opponent.

They allocate them to attack or defence like C3. However you do not have to allocate any dice to attacking if you do not want to.

The player who holds the Priority can make the other player allocate his dice first and decides the order that fights will be resolved in.

Ties are won not by the defender but by the fighter with the highest Fight score.

Any strikes that beat defence rolls go through and roll on the LOTR Wound chart.

Whether they hit or not, all combatants on a losing side are driven back 2".

The Evil side has the Priority. Since all his fighters are equal he does not really care which combat occurs first.


Both attacks succeed, but since Boromir had the higher winning roll '5' he resolves his damage first.


He rolls a '6' and dispatches the Uruk hai.


Boromir rolls a 2 in attack which automatically succeeds as the Uruk Hai did not defend. If he rolled a '1' it would have been a failure.
The Uruk Hai rolls a 4 and a 5 in attack; Boromir rolls a 3 in defence.  Both attacks go through.


Both attacks succeed but the Uruk Hai had the highest succeeding attack roll he goes first, rolling a '6' and a '2'.  Boromir takes a wound.  Boromir rolls a '3' which fails to wound the Uruk Hai in return.


Combat #3
Boromir declares he will defend with 2 dice and will not attack at all.
The Uruk Hai attacks with both dice.


The Uruk Hai rolls two '5's.  Since Boromir has the higher (F) rating he wins and successfully parries the attacks. Uruk Hai #3 lost and is driven back 2".

The combat ends with Boromir wounded and locked in combat with a Uruk Hai while one of the orcs is driven back 2" and another wounded.
Posted by evilleMonkeigh at 01:49