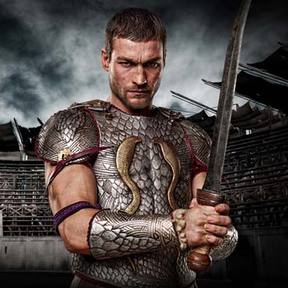 I have been interested in gladiator games since watching Spartacus (I initially thought it was simply B-grade smut and over-the-top gore but it has some clever plot twists). Advantages of a gladiator game is:

I bought Gladiator from Warhammer Ancients - a lovely quality book with a good campaign system but a tad bland in the rules.  I haven't bothered to review it because there is a very clear review here which covers everything of note.

I ordered Morituri Te Salutant (along with Hac, Habet, Hoc the most-mentioned of gladiator games) and it arrived from Black Hat Minis with lightning speed. I was very impressed with the communication, service and delivery times.

The Shiny
Compared to the glorious WAB Gladiator rulebook this is a B&W, spiral-plastic bound homemade affair, the sort of thing you could put together yourself at your local stationary shop.  No pictures or illustrations. At the very basic end of the spectrum.

Gladiators
There is a wide range of gladiator types with different initiative (agility) armour and weapons. Hit points are determined randomly.  When I saw the word "hit points" I flinched slightly.

Moves
There are a range of 30 moves which have to be planned in advance.  Written orders in a gladiator game? Yeah, That's what I thought.  The alternative would be to make order cards Wings-at-War style.
For each miniature.   I detest having to make counters and special cards for a game at the best of times.  This is a deal-breaker for me.

After selecting cards/writing down orders. fighters either move or make attacks.  The gameboard requires a hex map (which goes with the Wings-of-War style orders) which again put me off as it renders my sand-based arena useless. The gladiator with highest initiative score (dice roll + move chosen + initiative) acts first.

You compare your attack (if the enemy is in the right position to be attacked) to the enemy's chosen defence and reference it on a large 'old-school' 80s chart.

Maneuver is very important. There seems to be a lot of jockeying for positon.  From my brief experiments you can 'dance' around your opponent for quite a while before landing a strike.

If your maneuver or attack is obviously stupid or suicidal, you can convert it to another, usually less effective move. Many orders have restrictions on your next move.  I do like the tactics in this system and it adds a lot of flavour and decision making. This is the best part of the system but also involves record-keeping.  It has far superior flavour to the WAB "Gladiators" but the price paid in compexity is too steep.

Combat & Damage
Damage is done by hitpoints AND various levels of wounds (Stunned, nicks, cuts, wounds) which inflict various negative modifiers to the gladiator. If you have 3 levels each of cuts, nicks and wounds you might as well eschew hitpoints altogether as you effectively have 9 hitpoints anyway.  Players can die a lot faster than their hitpoints suggest as one good hit can take them out of the fight.

There are rules for multiple combats but can't see myself trying them - the game is complex enough as it is.

Other Stuff
There are rules for throwing, shooting and entangling foes, mounted gladiators and animals such as lions and other beasts.  You can beg for mercy and there are campaign rules, but I wouldn't say they are complete. Your gladiator can 'level up' in experience.  Each gladiator type has different armour and moves - a full page sheet of data on each. 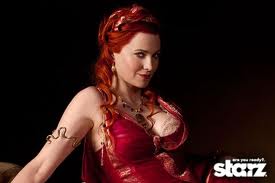 Not just boobies: the women in Spartacus are strong, willful characters who drive the plot

TL:DR
Hex based, with 30 Wings-of-War style cards or written orders. This is the extreme end of the complexity scale from the simplistic WAB Gladators. Definitely for 1 on 1 combat only.  Record keeping and complexity are high. A quick reference page at the back would be useful.  Has some interesting maneuver tactics, far superior in 'flavour' to the WAB Gladiators; but the game is so cumbersome as to be inapproachable; the rulebook layout does not help.

I liked the customer service, but to be frank, with regards to these rules; they are now at the bottom of my rules choices. I'm going to try Hac Habet Hoc next and if it fails I am going to modify WAB Gladiators with some sort of dice pool mechanic or even try Red Sand Blue Sky despite my chronic dislike of 2HW rulebook layouts.