Now I am happy with the way I dealt with missiles (eliminating record keeping whilst allowing vector movement) but my attempt to simplify fighter/drone movement (doing away with drift markers) feels a little awkward.


Fighter v Drone
Personally I doubt Star Wars style manned fighters will play any part in future conflicts. I can envision a PT-boat/fast attack craft sized vessel with a small living area patrolling crowded or high-traffic areas like asteroid belts and near orbit in a police role; where cost is important and a human is needed to make split second decisions. Most space fighters mimic WW2 fighters vs WW2 naval battleships - a totally false analogy as they work in different mediums (air, water) whereas both spaceships and fighters are in space - and a big ship can carry just as much thrust/weight as a small one.  Larger spaceships can carry more fuel and much better armour at similar speeds, and could pick off multiple smaller ships long before they were in threat range with their more powerful weapons and sensors. Risking expensively trained crew on near suicidal missions suggests the trend toward drones/UAVs seems set to continue. However fighters should work pretty much the same so simply substitute "fighter" for "drone" and ignore all drone control range references. 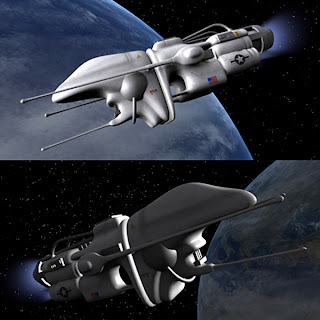 Drones: less sexy than an X-Wing

Drone Types
I think ships can carry multiple drone types (or rather  the same drone type can be programmed for multiple missions). For simplicity's sake, a drone swarm must contain all the same type.  A drone swarm has up to 6 drones which can be tracked with a microdice.

Combat Drones
These carry a single energy or kinetic weapon and tend to score a single hit per shot.

EW Drones
These can be programmed to carry out the same range of tasks as an EW module, but must stick with the same mission type once launched.  CQ rolls are -1 with each drone that is destroyed.

ECM Drones
These can attempt to jam enemy ships but are very weak; CQ d6 to roll, with a -1 each drone that is destroyed.

Web Drones
These can attempt to tractor enemy ships but are CQ 6 to tractor with -1 each drone that is destroyed.

Repair Drones
These can do the same job as Repair Microdrones but at far greater ranges. 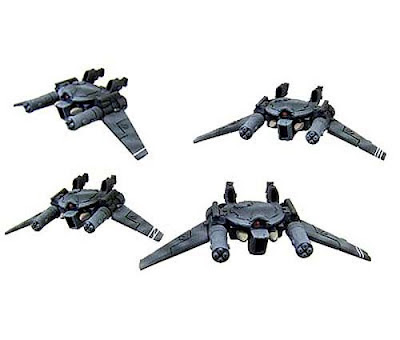 
Drone Combat
Remote Control vs AI: If within CQ range of their ship drones may use the ship CQ but default to CQ6 (drones aren't very bright) when beyond remote control range.

Drones have a 1" range due to limited sensors. When firing they simply need to roll above CQ in order to score a hit.

Dogfighting. Drones within 1" of another drone are assumed to be 'dogfighting'.  Roll CQ for each fighter in the swarm involved.  Roll a defensive dice (=CQ) for each defending fighter (up to the total number of defending dice). Each hit an attacker scores than cannot be equalled by a defender scores a hit.

More to be added - (Planetary CAS, refueling & rearming, etc)
Posted by evilleMonkeigh at 05:50