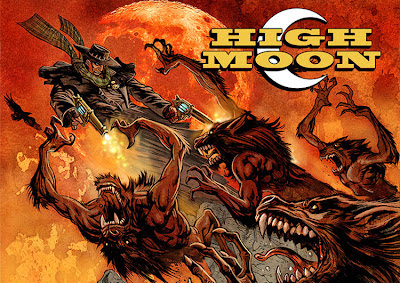 I was inspired by this werewolf western... High Moon

I looked through "Six Gun Sound"  (a Two Hour Wargames product) as a possible Western alternative to the rather simplistic Legends of the Old West. I counted 46 charts in the first 30 page main rules section.  I decided to look elsewhere.

(Yes, 2HW fanboys will point out you only use 4-5 of those charts regularly; but the fact so many charts exist suggest you will need them at some point of the game. Also, the rules layout are not very reader-friendly)

Inspired by a comic (High Moon) I read recently, I then dug out a copy of the Great Rail Wars weird wild west rules I had on my bookshelf.  Recommended to be by some guys on TMP, this is an old system though still available new on ebay and as a pdf on Wargames Vault. I think it is actually an ancestor of the Savage Worlds generic RPG system. A condensed version of the system "Showdown" is found here for free. 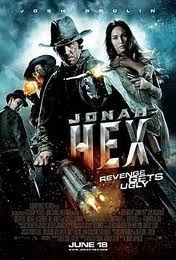 A Fistful of Models
I liked the weird west concept, but was initially turned off the GRW system due to the inability to get good weird western models outside of the official GRW suppliers, Jeff Valent Studios (who have a bit of an unreliable reputation, according to the gossips on TMP) and the models that did exist were rather chunky, oversize and uninspiring.  And I had just discovered the awesome characterful Malifaux minis (before I realised the game, like Warmachine, was bascially about remembering more special rules than your opponent) so the rulebook has been tucked away until now.  So could it work for a standard Western campaign?

I am going to compare it primarily with Malifaux (also a Weird West ruleset per se) and Legends of the Old West (a warband campaign game based on GW's simple LOTR rules).


The Shiny
A softback rulebook with lots of black and white cartoon pictures.  Easy enough to read in its layout but certainly not a top-level production, a la Infinity the Game, Anima Tactics or similar.

There is 22 pages of fluff about the weird west, 37 of actual rules and 77 of various appendixes and faction information (aka army lists).

Setup
There are only 3 scenarios (one of which is a typical 'kill em all' one).  Having troops who are "scouts" allow advantages in deployment.

There is a random terrain generator in the appendixes if you wish to use it.

Stats
These are represented using different dice (d4 through to d12); with d6 to d8 being about average and d12 being heroic.  The usual 'pass' is a 4+ (a system also used in Ambush Alley Games like Tomorrow's War).

There are also 'Fate Chips' which are drawn randomly and can be spent to re-roll events. I like this - rather like the resource management from Malifaux.

Initiative
Each bunch of minions or hero figure get dealt a card and move in order of best (Ace) to worst (deuce).
No IGOUGO - nice!  In addition Jokers allow for random events.  Sometimes units can activare twice due to supernatural intervention.

Movement
Units have a coherency rule like 40k (i.e. all models within 4" of another person in a posse). Units can sprint with an extra d6" but have to give up firing etc.  There are climbing, jumping and hiding rules as well. Figures can also go prone and there are riding and vehicle rules.

Combat
To hit a target the firer must beat a target number (usually 4 -up to 8 at long range). There are rules for two handed shooting and models have the ability to pop out of cover and fire snap shots.

Figures are either knocked down, out of action and killed. There are no markers (yay!) as you simply tip the figure on its side or remove it. How refreshing! Heroes may have specific wounds, however.


Morale
Units who have lost men must pass a morale test or are 'shaken' (-1 to die rolls) or flee.


Cannons & Magic
There are rules for cannon and large vehicle weapons and also magic powers.  Sorcerers, priests, mad scientists and shamans all inhabit the weird west.   Evil magicians can suffer burnout on critical failures.
I liked the "Harrowed" possessed gunslingers who are resistant to damage, can see in the dark, pass through objects and gain power by defeating enemies in melee. However they can be overcome by their demon and controlled by your opponent if they are weak willed.


Abilities & Spells
There is a very wide range of traits, spells and abilities.  However each unit only tends to have 1-2 each maximum so it is much more sensible than Malifaux's plethora of unique rules.

There are also unique gizmos and relics that have unique attributes.

There is a definite RPG vibe in this section.

Army Lists
There is a wide range of 'units' from Confederates to witches to mercenary railroadmen.  Skinwalkers and undead, wolves and Indians....   lots of interesting stuff whether you use them in the 'official' faction or not.

There is rather extensive fluff which is tied in with the Deadlands RPG, which did not really interest me, but seemed well fleshed out.

Making it Work: Campaign
The Savage Worlds RPG system means a DIY campaign is quite workable.  The pocket Savage Worlds general rulebook is quite cheap (in fact I realise I had already bought it on a whim).  When I looked through it today - B4, full colour, nicely presented, 160 pages - at $10 it is a stunning bargain - with production values exceeding many $30-35 rulesets. I suspect it may be sold at a loss to 'hook' you into the Savage Worlds RPG engine so you buy their sourcebooks because I have never seen a quality glossy rulebook so cheap.

So the lack of a campaign system is not as crippling as it normally would, and in fact I am very interested in the RPG supplements.

In this review I am discussing the miniatures game not the RPG but I suspect the game mechanics are very similar.

TL:DR
The skills are based on different dice so you need to have plenty of d4, d6, d8, d10, d12 and d20s. It has a simple resource management (chips) and lots of traits and spells enabling you to create interesting forces.  lack of suitable minis could be an issue.  However you could re-task many Malifaux figures for this rather easily and I am now eyeing off the new Wyrd minis Guild box. The gameplay is reasonably straightforward and there are no markers to clutter up the gameboard.

I am definitely going to investigate this further as it seems a little more interesting than the WH Legends of the Old West system which is rather rigid and bland (basically LOTR with six-guns). It seems very adaptable with a wide range of skills and traits; and I think the Savage Worlds Explorer's Guide at $10 is a fantastic bargain and lends itself well to skirmish gaming in any period.  In fact, Deadlands Reloaded (the RPG based on this system) might be a better buy that the GRW ruleset itself.

Tip: Download the Showdown rules and test the core gameplay for yourself. The Savage Worlds engine obviously works for skirmish gaming which makes their RPG supplements attractive (I'm going to buy the Deadlands RPG and their Solomon Kane occult 18th century one; will post a review when I get them)