Empire Economics
I am going to abstract minerals, trade and production into "Resource Points" which includes internal empire trade, natural resources etc. Having multiple resources to manage (vespene, unobtanium, rocket fuel, radium etc) simply complicates matters.  This isn't a trading game, and we don't have a PC program to manage the math.

Politics
Why are you trying to make friends? Do you NOT want to test-drive that shiny Star Destroyer? There are no formal rules for this but if you want to do some old-fashioned schoolyard ganging up, be my guest. Trade rules offer raiding opportunities but I am omitting them as I want no reason to be discouraged from hassling my neighbours.  Mutual economic benefits? Sounds like an excuse to avoid a fight to me... 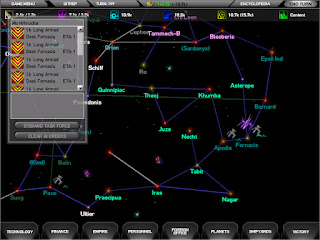 Researching & Exploring
Nope. The time span of campaign turns (weeks/days rather than months/years) means significant research "oh wow I discovered a blue +1 plasma laser" is unlikely.We are here to fight battles not win by out-teching our foes, Civilisation-style...

Encouraging Fights
We want to avoid "turtling" (i.e. hiding from a fight whilst building up an overwhelming force) and encourage raiding, particularly small skirmishes with small ships, which follows historical example. Small, expendable ships are always more active than their larger counterparts.

Level Up
Players earn experience and level up their ships each fight they participate in. Perhaps each system comes with a small random defence force that would avoid larger fleets but would come out to fight a few frigates.  This would guarantee 'level up' opportunities as well as economic advantages (see below).


Fight or Lose $$$
Each turn a player does not engage in offensive missions (i.e. incursions into enemy space) they lose 10% of total RP due to population unrest.

Small Cheap Raiders - Attack to make $$$
Fleets earn RPs if they are blockading enemy systems (or at least deny those RPs to the enemy) ; perhaps of they have enough ships to block each jumpgate they deny their foes 100% of the system revenue. If they blocked 1 of 3 jumpgates they would block 33% of revenue....

If they are 'raiding' they can make 10% of the system revenue each ship in system to a maximum of 50%.

This would encourage small raiding parties of 3-5 small ships as the most cost effective way to raid/blockade an enemy system.  Thus small, regular battles should become the norm.

Roll d12 for number of features in solar system; then roll d12 each time for what the features might be

Galaxy Map
I'm likely opting for a node system beloved by so many 4X PC games.

Hidden Movement?
You move counters with code names on the map (i.e.  Task Force 3, Task Force 8, etc) . You do not need to show your opponent the composition of the task force until it enters his territory or a location containing a task force of his own.  So your opponent can see forces being moved around in your territory, but you have no idea if it is a single escort on a raiding mission or a battlefleet marshalled to crush his homeworld.

You can swap ships between tasks forces if they are in the same solar system, somewhat like a shell game.

Mining bases on gas giants and asteroids are very lucrative due to mineral wealth but easily destroyed or captured.

RP of ships should be balanced against planet RP - as it gives you a rough guide of how many ships you can afford to lose defending it. Perhaps a single cruiser in RP cost for a homeworld, per turn?

Repairing should be much cheaper than building new (i.e. to repair 50% hull would not cost 50% of the total of a new ship, but less than 25%) to encourage players to retreat to fight another day when damaged.

Ships maybe take a random die roll to see when they are completed as projects are seldom finished on time...

Solar System Travel
There are a few ways of doing this. The more abstracted methods are naturally simpler.  Jumpgates linking systems will be the most common.  Ship jumps take turns = low d6 (roll 2 x d6 and choose the lowest). Momentum is conserved - i.e. a ship travelling 10" velocity into a jumpgate will exit it at 10" as well.

Ships with jump drives can jump directly to a system where there is a friendly beacon.  The beacon must be located a specific distance from a gravity well.  Ships that have just jumped and used a beacon are "shaken" and at -1 to all rolls that turn.  They can only fire in reaction and are at velocity 0.