I'm always on the lookout for "sensible" sci fi minis (i.e. ones without skullz, scrollz and spiky bitz dripping off them like gangsta bling) and I came across these "not Colonial Marines" 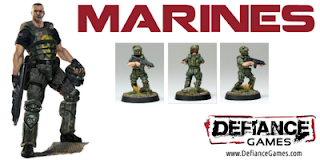 If I read it right, $30 for 24 marines is very affordable and makes a mockery of GW pricing. The line will expand through 2012

What interested me more was the free rules that came with it which are squad to platoon+ size. (I.e. 6-40+ minis like Warhammer $40,000).   I'd say using 40-100 minis like they say is a bit optimistic; unlike 40K it does seem to "scale down" meaning a force of say three 4-man fire teams, a marksman and a weapons team would provide a decent game; and the strength of Alien Wars is in smaller infantry actions.

The Shiny
It's beta - and it's a free pdf, so I am not too critical. Actually it's quite easy to read and 30 pages is, for me, the sweet spot of rules complexity (i.e. not oversimple or too involved).  There is artwork scattered throughout reinforcing the Aliens/Starship Troopers theme. The idea of offering "beta" rules as a free pdf to maximise player exposure is a good one, and also allows a bigger pool of "beta testers" to break test the game. 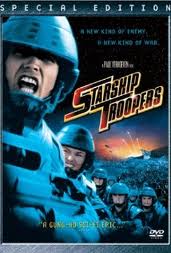 Starship Troopers is full of pulpy B-grade goodness. I suspect many haters fail to "get" its tongue-in-cheek nature

Troops must roll equal or under the Combat Value (CV) to succeed at tasks or pass tests.

Weapons are very generic "Aliens/Starship Troopers" and include assault rifles, SAWs, heavy support weapons such as support MGs, grenade launchers and flame throwers. Nothing exotic. (I can see how a handheld tactical nuke might upset game balance). I suspect the weapons choices will be expanded in the future to include railguns and perhaps energy weapons.

There are sample forces included to give you an idea of typical units and points costs. 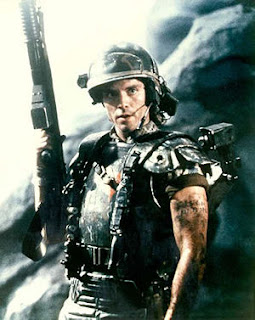 Gameplay
You roll a dice and compare it on a chart with the communication rating of your unit; units can perform 1 or 2 actions depending on the rank of their leader - cross referenced with the dice roll.
A "6" on this roll means random events also occur - similar to "Fog of War" cards in Ambush Alley, for example - that can lead to events of good or bad fortune for yourself or opponent.


Reactions
The ability to interrupt an opponents' turn increases player interest and involvement - shown by the success of Infinity and Ambush Alley.  Soldiers don't stand like shop mannequins waiting to be mowed down - they react to their foes.  Alien War has a solid simple system; allowing you to react to foes within 24". If you are pinned you cannot react; and if you are on overwatch/counterattack status you can automatically shoot or charge foes to your front. Otherwise a unit must test against the CV of its leader; if it passes it may counter-attack, shoot or retreat.  If the element fails the test, no further friendlies can test to react this turn.

I like the reaction system - they have refined the simple reactions of the OOP Starship Troopers game without going to the complexity of Infinity.  In fact the system is pretty much identical to one I devised to make my 40K games more interesting and it could be bolted directly on to 40K (subsitute the Leader stat for CV and I made my reaction range 12" not 24" due to the short range of 40k weapons)

Targets are rated as easy, basic, concealed, in cover, and fortified.  This reminds me of the Two Fat Lardies in that commonsense is used to decide modifiers. This is then cross referenced with firer skill (veteran- green) to see the "to hit" number.

I like the rules for heavy weapons jamming - any rolls featuring more '6's than rolls under the firer's CV jams if there is no assistant gunner. I've seen this used well in air combat games for tracking ammunition.  Marksmen can target specific enemy figures.

Leaders must pass their CV to lead their troops into melee; a unit may actually advance while shooting before engaging in melee (a refreshing change - most games tend to assume they tuck their rifles away, draw their knives and attack, a la Waterloo bayonet charge). Defenders must test to keep their nerve and may also fire before being engaged. Units with close combat weapons roll two dice (a la Starship Troopers the game) and heavy weapons only roll one.

The winner of the melee is decided by a rather annoying Warhammer Fantasy-style method of counting1 for each wounded, 2 for serious wounds, 3 for killed, and 4 for gory deaths; then comparing scores as a ratio. This is rather clunky

Suppression
Having reactions and suppression is what elevates this game above 40K; troops inside the blast radius of explosives (or if hits exceed the unit's figures) must test against their leader's CV. If he fails they are pinned, and may run and dive 2+d6" toward cover. It cannot do anything in its next action and may not react.  A second "pin" marker means two actions are forfeited.

Troops may voluntarily "hit the dirt" to avoid enemy fire - which is similar to pinning; and also needs a CV test to recover. 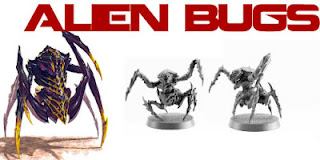 The Defiance bugs fill a void left by the demise of the Mongoose SST line. This line will also be expanded.

Damage & Injury
If the hits on a target unit exceed the figures in it,  the target must test to see if it was pinned.  When deciding who is hit, the most exposed mini is always the first choice; with the owning player deciding who takes the hits thereafter.  This offers interesting choices - as a veteran mini can survive hits more easily; but is more valuable if lost.

Models then roll against their armour on the "Cheating Death" table, where they may retaliate by firing back, be wounded or knocked out of action.   Wounded or out of action figures may be stunned or hurt - the soldier's can be tested to mitigate this. Soldiers who suffer a "gory death" may pin nearby troops who are showered with body parts.

This is by far the most complex part of the rules so far. Hurt troops are at -1 to their CV which involves tracking, and Stunned troops also need markers showing their status.

This is the games "chokepoint" - it caps the size of the force to smaller actions.

Morale
I like the quick way Alien Wars deals with it. Squads test and retreat individually, if these conditions are met: if the squad leader, all the fireteam leaders, or half the squad is out of action or the squad is pinned.

Miniatures vs Rules
The Alien Wars rules are obviously meant to accompany the Defiance Games "not Starship troopers" line. There are German, Marine and Bug forces, of which only the latter two have releases - a single base box set each.  More releases are planned but I think Defiance has made a mistake in not releasing a more "complete" line - people like myself will wait for support weapons and vehicles - meanwhile unsold stock sits on the shelf and the game loses momentum.

In the interim, the rules could be developed standalone used to sell the Defiance miniatures and promote interest. Widening the scope of the game to include vehicles and exotic/space fantasy tech, plus a campaign system and unit builder, would fill a gap AE: Bounty failed to achieve; the rule book could include  lots of photos and army lists for the official Defiance line; thus promoting profitable mini sales; whilst also selling as a standalone 28mm/15mm ruleset able to support the tech on the more exotic 40K minis would widen the consumer base. I'd happily pay $30 for a full fleshed out set of these rules and pdf sales have low overheads and get the rules "out there." 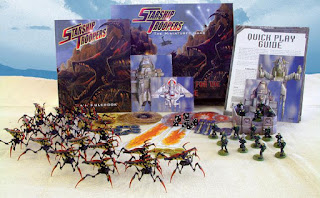 
TL:DR
Pretty darn good for a beta. Alien War has strong similarities to both 40K and the OOP Mongoose game Starship Troopers; the author has borrowed much of the best bits from both, whilst adding in his own ("random event cards"  "firing when charging"  "casualty rules") and enhancing them where possible.

The game is superior in having a more robust reaction system than Starship troopers. The rules for pinning and suppression are also good; the game has 100% more tactical choices than the "charge to hand to hand" of Warhammer $40,000; it also scales down better to using smaller groups of models.

The author has deliberately devoted considerable detail to dealing with casualties which has added more complexity than elsewhere in the game; which players may or may not appreciate (and slows the game down).  I also feel there may be a better way of determining the winner of a melee than the WFB style point-scoring system adopted.

Right now the game is focussed on the pseudo Starship Troopers/Aliens universe of the Defiance games minis. A limited weapon list and a lack of vehicle rules will no doubt be remedied in future updates; I'd like to see a "points builder" allowing you to create and stat up your own minis.

I can also see the game expanding to include "Traits" and "Special Abilities" - which would be useful to give individual character and flavour to a squad of bug hunting Marines. If they do I hope they keep it manageable (20 or so simple generic traits) rather than succumb "Ability Creep" like Infinity where each model has a unique ability ("he who knows the most rules wins").

Recommend? This game bridges the gap between the bland tactic-less vanilla of 40K and the complex reaction choices of Infinity and is an ideal introduction to using reaction systems within a familiar framework. Would work equally for Space Hulk corridor crawls or platoon sized infantry combat.  I think this one has a big future ahead of it, especially paired with the Defiance game bugs, which fill a gap left vacant by the demise of the old Mongoose game.