Pulp horror gamers may not generally, as a species, mix naturally with the ultra-competitive cheesiness of Warmachine.

As a result they might miss out on some fun miniatures. Amongst others I liked this "Swamp Horror" from the Minions (Hordes) faction. 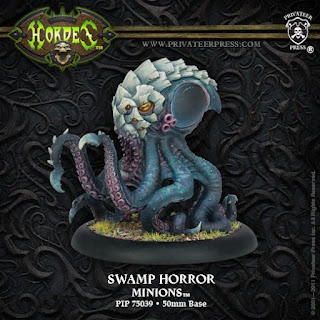 The Swamp Horror demands robed cultists to worship it!
The sculpt is a lot crisper than many by pulp mini manufacturers, who tend to be more "characterful"

In the same section, I came across the voodoo crocodiles. That's right - voodoo worshipping magic sentient crocodilians. If that doesn't deserve a cult of worshippers, I don't know what does. 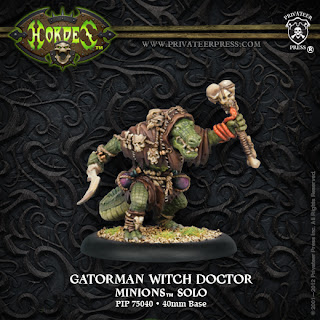 Led by their powerful witch doctor.... 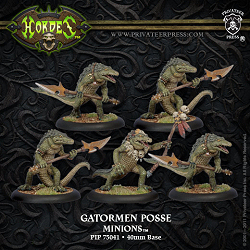 The Gatormen would be equally at home in a "Lost Worlds" scenario.  Furthermore, I came across some "Bog Trogs" - who are an interesting twist on the fishmen/Deep One; I can imagine them as guards in an undersea kingdom or defending a lost treasure city in the Amazon. 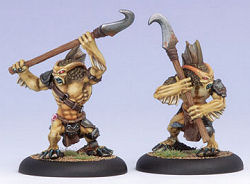 
That's the fun thing about pulp gaming - unconstrained by "army lists" any mini is fair game!
Posted by evilleMonkeigh at 07:18