This post is partly to show the mega-cheap EM4 Silent Death spacefighter models I plan on using as my "fighter subs":- 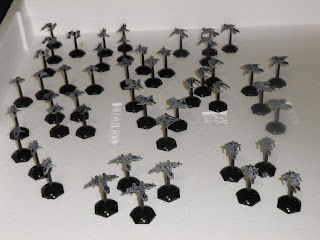 Coming with bases included $3.50 for 12 is not bad.  They are quite crisp sculpts with no flash and only faint mold lines.  I have given them rather bland grey paint schemes as modern naval vessels AND aircraft seem to be grey as their uniform colour regardless of nationality.

Some sculpts are more sub-like than others - the smaller models on the left are quite plausible.

The second reason was to "put out there" the damage system I could use for this (I could also see it suiting a space fighter game) - ergo: 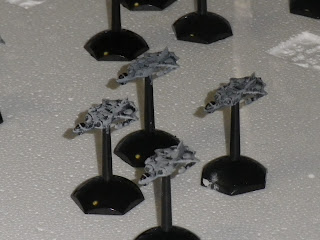 I simply drybrushed 2 shades of grey over black undercoat to pick out detail. Yeah, it probably needs squadron markings and detailing like weapons but I only had an hour before tea to do all 50...

DAMAGE TYPES
Shocked = no major damage - glancing or superficial hits; for next turn -2 to all rolls. Shocked results are not cumulative (i.e. you can be "shocked" only once per turn) but they do stack with modifiers caused by damage
Damaged = this takes several forms. See if the damage roll was odd or even.
Destroyed = "Kaboom"


For simplicity's sake a fighter will have 2 profiles; a normal and a damaged one.
Why I like it: You only need 2 markers (one for hull, one for engines) - simples!
Why I might change it: People might like more descriptive "criticals"

This combat system would work well with a d10+addons mechanic; for example opposed rolls could use a similar mechanism where d10+pilot skill is contrasted to d10+pilot skill.  Having a similar mechanic for all rules actions makes a ruleset more coherent and "fluent" - as opposed to new random rules and mechanics for every area *cough* Two Fat Lardies *cough*

I also like the fact the margin of success when you hit also impacts the damage roll - a "good" or well-aimed shot will do more damage than a glancing shot.
Posted by evilleMonkeigh at 04:38