Battlegame Armada!
This got me interested - my first rules set. It was a book on the Armada, with a hex boardgame included.  Wind direction, die rolls an simple damage charts. I played it for hours and designed many house rules for it. Looking back I realise it was a very awkward, flawed game but my 10-year-old self thought it was unsurpassed. 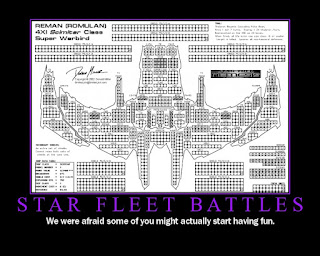 The game that almost killed my interested before I got started....

Star Fleet Battles
This almost wiped out my interest in wargaming altogether.   I enjoyed playing small actions but when I realised I spent more time photocopying ship logs than playing, and more time referencing rule TB 1.4.11a than pushing minis around the table I tossed it out, never to return. I found the concept of "impulse movement" interesting.  I invented a range of scenarios and missions but the game proved incapable of handling the large amount of ships I craved. 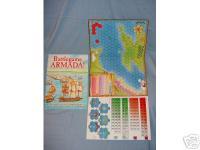 BattleGame Armada - an accidental introduction to wargaming. I bought it as a book...


General Quarters I & II
Resolving hits and damage with a single 3-dice toss, with only 4 hull and 4 armament boxes providing a range of damage options; a small, sensible rulebook. Playing WW1 and WW2 quickly took over from space.  WW1, without the dominant airpower of WW2, quickly became my favourite, with its quirky range of unusual ship designs.  This is where I became interested in campaign games, where fights need not be to the death - all battles served a higher purpose. Hours of fun.

...and the game that restored the fun, and emphasized that, with rules, sometimes less IS more

DBA
This was my first experiment with small (6mm) minis and continued my swing back to simpler rules after the tome that was  Star Fleet Battles.  It became a little stale and chess-like after a while; but was fun to play with others and its simple campaign system showed me that campaigns do not need to be complex to be fun - it can just be a way to logically link battles and enforce sensible concepts of when to withdraw.

Battletech
This game both ignited my interest in big stompy robot and confirmed my dislike of record keeping.  The local inavailability of miniature mechs meant I was restricted to card cutouts and thus this game never gained the place in my affections it might have.  I always thought chipping off armour on body parts was stupid - a shot will either go through armour or bounce off - not slowly sandpaper armour away. Robot vs Robot got old after awhile - I craved a combined arms version. 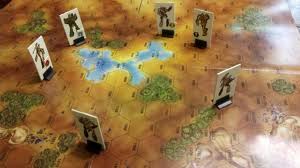 To a poor high school student without a credit card or internet access, boardgames like Battletech were a boon


Rapid Fire (WW2)
These were interesting in that they served as inspiration for a host of home rules rather than being used for their intended purpose; being adapted for mech and space games amongst others.

MIDDLE PERIOD (I meet my first gaming groups and realise most wargamers smell)
Freewargamesrules.co.uk
I realised wargames could be made up by anyone, not just people who can get books published. I downloaded and tried many games, and both modified rules and designed many of my own. None really stand out - a lack of purpose-built playing pieces tended to handicap my gaming attempts. I did play a post apocalyptic car wars game with modified Hot Wheels cars.

Warhammer $40,000 (2nd and 5th ed)
I never bought into the "Hobby" but I did like the paints.  I bought random boxes of minis that interested me and tried to add on "house rules" for suppression and reaction moves; but sadly I discovered those in the "Hobby" do not like it tampered with (except by official, expensive codexes which regularly changed balance). I also discovered I disliked games where a good army list > tactics; and where initial deployment often had more influence than tactics in the ensuing gameplay.

At the same time I bought a LOTR box set; a surprisingly clean set of rules and came with the "Battle Companies" campaign download. Unfortunately I always felt tied to the movie universe (unable to do red-skin Oni orks like Confrontation) so I never pursued it beyond a few dungeon crawl skirmishes.

Full Thrust
I loved the "build it yourself" system and the simple generic rules.  I did not like writing down orders and quickly tried to simplify the hitboxes-and-criticals system.  I started to experiment with different pseudo vector movement systems.  GZG and EM4 starships were cool and cheap enough for fleet sized quantities.. About the same time I experimented with Silent Death (to this day the only commonly-known space fighter game) and was put off by its IGOUGO tail-chasing nature, the record keeping and missile/torpedo rules.

Malifaux
This game, with its quirky minis and mix of Victorian horror-gothic-steampunk-weird west-magic was a fun mishmash of genres and had a cool card mechanic. Sadly the game suffered from "rules creep" as each mini had many unique special rules; the game devolved into "who knows the most rules wins" - a reason I have never liked Warmachine despite the interesting models. As more models (and thus more rules) got added to the line, my interest waned.

Song of Blades & Heroes
Saw this recommended and tried it out. A bit too simplistic in its stats; and the full game is spread over a few pdf supplements but it was a great excuse to paint random warbands and get into fantasy in a way that did not involve block painting units of elves or orcs.  The "build your own mini" Excel builder provided hours of LEGO-style fun and I enjoyed finding a use for the OOP quirky Confrontation 3 metal minis.  Very high in the fun factor and good for playing with non-gamers. 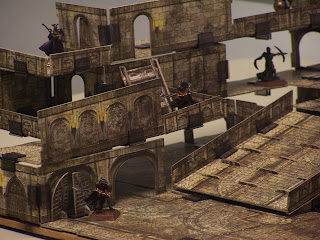 Air Warfare
I have become addicted to painting 1:600 jets; I then spent up big on 1:600 WW1 and WW2 only to find them so small as to lose all character. I still await a decent non-guessing game modern jet game; though AirWar C21 comes close the lack of altitude rules are offputting, and the Tumbling Dice "Wings at War" series too generic. 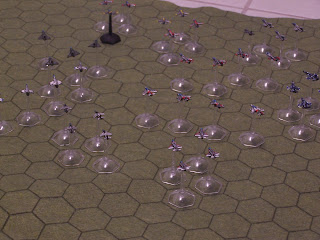 1:600 jets are extremely cheap and  curiously satisfying to paint. I have squillions of them...

Weird War II
I got sucked into Weird War II by the promise of small mini count of AE: WW2 but switched to Secrets of the Third Reich due to falling out of love with the rules. Also I liked the excuse to buy Weird War 2 walkers. Rackham's OOP AT-43 and Dust Tactics have some awesome models.

VSF
Brigade aeronefs are also an attraction though I never enjoyed the "Aeronef" rules and await a decent set for aerial battleship goodness. I've always wanted to do a John Carter of Mars-esque setting but the minis have always been a bit clunky (or expensive, in the case of TinMan). I'm going to try to cobble something together in 15mm. Never found a set of rules for gaming my dream - a Crimson Skies/Last Exile hybrid campaign with sky pirates.

Pulp/Horror
I am relatively new to it and tend to spend more time fiddling with rulebooks and ordering obscure and interesting miniatures than playing. Definitely a fun genre to game in. I need to build up a decent collection of monsters. Strange Aeons, Empire of the Dead and Chaos in Carpathia are my current focii.

Ambush Alley Games/15mm
I found 15mm a few years back and was stunned at the pricing (a mechanised platoon, with 30+ troops and a half dozen vehicles for $50 = the price of a single GW 28mm box).  The Ambush Alley modern ruleset was tried and put aside years ago (as I discovered the much shinier "Infinity" at the exact same time) but Tomorrow's War has become my go-to ruleset for near future gaming.  Not as simple as it seems, it sets the benchmark when it comes to using logical tactics. I have a dozen or so 15mm sci fi and modern armies with no sign of slowing down. Ground scale is more realistic and terrain is cheaper and easier to store. 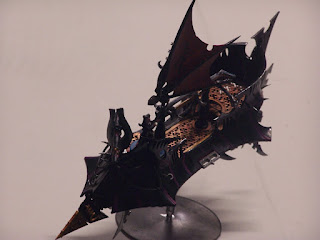 The awesome thing about 15mm is that 28mm stuff can be conscripted; like my Dark Eldar Raider  15mm Sky Barge

Micro-scale (6mm to 1:4800)
I'm starting to drop in size as I've found the smaller they are, the more likely to be painted; I've found that my 15mm collection is 90% painted as opposed to about 40% of my 28mm. In addition, space and price savings are massive; terrain can be bought and deployed quickly, and not laboriously made due to the insignificant cost; therefore getting "models on the table" faster and leading to less stalled projects.  I'm hovering between 1:600 and 1:300 but will probably end up with both. I have abandoned my 1:4800 sailing ships but have acquired a copy of General Quarters 3 and a few fleets of WW1 1:2400 to keep my naval gaming alive.

Infinity
Beautiful minis, free-to-download rules, and a beautifully presented rulebook.  Not everyone likes the anime aesthetic but you would be missing out on a great game. Once you wrap your head around their unusual reaction system you will quickly realize it is you, and not your army list, who is responsible for winning or losing.  Sadly, this is becoming less of the case as new minis introduce new rules and gadgets; now, like Warmachine remembering what you and your foe can do is becoming paramount to victory. Huge terrain requirements and lack of a campaign system have stopped this game from reaching #1 spot for me. 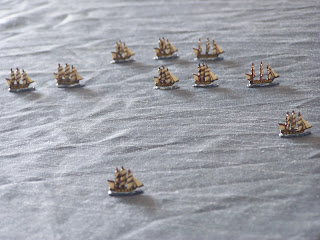 When the ships of the line were half the size of 36-gun frigates you know you need a larger scale in ship...

Space
This mostly consists of bitching about the repetitive nature of space games and experimenting with my own home rules. I did like Battlefleet Gothic and its "Warmaster" style special order mechanic but it was only ever WW1 in space; and I could never justify the price of the Citadel minis, proxying with GZG stuff instead. Lightning Strike is a gem in the rough and I am always trying to get a Gundam-style game sorted.

Skirmish/Campaign Games
I'm experimenting with gladiator games (running a ludus) of which Red Sand Blue Sky seems to be the frontrunner; wild west (Six Gun Sound/Legends of the Old West) although I am tending towards Weird West with the latter, using the Deadlands universe for inspiration. Cowboys vs vampires and werewolves, indeed!

Looking back I can really see the games that have shaped me and my gaming preferences were often the negative ones - what does not kill you only makes you stronger....
Posted by evilleMonkeigh at 03:51