MOVEMENT
Subfighters' rocket engines give stunning acceleration and the ability to deform the vapor bubble the super-cavitating craft "fly" inside bestows surprising agility.  "Normal" or stealth speed is from 0-4" (40kts); supercav speeds are 5-20" (50 to 200+ knots)

There are 6 water levels which can be tracked by a 5mm micro dice blu-tacked to the base of the mini. 1-Very Shallow  2-Shallow 3-Medium  4-Deep 5-Very Deep  6-Crush
Shallow is on or about the surface, whilst shallow is around 100m and each level adds about another 100m - i.e. crush depth is around 900m

Supercav Movement
Supercav subs have 3 speed levels; they can change 1 level per move. Pilots declare the thrust they allocate before moving the sub.
*Normal (0-4")
*Half Boost (5"-half maximum speed)
*Full Boost (half to full maximum speed) 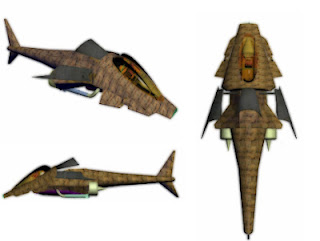 Turning
Turns are executed at the midpoint and end of a turn.

Changing Depth
Normal subs change depth by 1 level per turn for free.
Sub-fighters at supercav speeds can use their rocket engines to change multiple levels. Every 4" of movement allows a free level change.  A subfighter moving 16" could make a level change every 4" travelled.

"Drag Turn"
Sub-fighters can make more extreme maneuvers by dragging a small part of their hull outside the vapor bubble.  This is fraught with danger as a loss of control could see the ship tumble and fully "de-cav" - effectively similar to an aircraft hitting the water at 200 knots.  Drag turns allow an extra turn at the start of the move or a double turn at the middle or end portions.  Drag turns are declared after thrust has been allocated; and the subfighters' pilot must make a piloting test to succeed.


Failed Piloting Test
Minor Fail = "Whoa!" - pilot almost loses it and spends the rest of the turn trying to get the fighter under control. Cannot engage or evade targets; moves allocated thrust in a straight line.
Major Fail = "Splat!"  - subfighter tumbles out of control, hitting a "solid" wall of water at high speed

Example A "Zoom": A subfighter uses 16" thrust to dive vertically on a target below.  He passes the "piloting" test and moves forward 8" (and can change 2 levels for free if he wants like usual). He turns 45d starboard to align better with the target. The subfighter is now vertical.  As the pilot has 8" of movement remaining he can make a further 2 level changes; but he can choose whether or not to actually move the sub on the table or simply declare it is vertical movement.  He may turn at the end of the move as usual

Example B "Immelmann/Vertical Turn": A subfighter uses 16" thrust and decides to climb and reverse its direction.  He passes the "Piloting" test and moves forward 8". Again, he could climb 2 levels for free during this stage.  The now the subfighter is vertical, but the pilot decides to flip it over. He must climb the remaining 2 levels vertically due to the 8" thrust. The fighter is then "flipped" 180d to face to the rear. He may turn at the end of the move as usual.*

(*This may be removed if overused.)


Thoughts: I'm thinking "agile" fighters will get a 45d turn and standard fighters a 30d turn; allowing course changes of 90d and 60d respectively over the course of a turn and preventing too much "fail chasing" where subs will simply move around on each others' tail when it is time to activate.

There are 3 "special moves" which allow radical changes in direction but they are dangerous - a failed "piloting test" would see them unable to fire, vulnerable and fighting to regain control or dead. 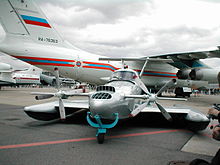 Ground Effect:  I intended this to be sub-surface only but I was thinking about zoom climbs - what would happen if a 200kt+ sub breached the surface at speed?

How it would re-enter the water is another question, but hey, this is sci fi!  The idea of rocket-powered subs bursting out of the water and chasing each other in dogfights 50m or so above the waves is certainly appealing....
Posted by evilleMonkeigh at 05:32