This is the third in my three part horror review series which includes Chaos in Carpathia and Strange Aeons.  Empire in the Dead is a skirmish game by West Wind, creators of Secrets of the Third Reich - which is a wonderful excuse to buy stompy Weird War 2 mecha.

The Shiny: A 150-page hardback which surpasses West Wind's SOTR book by an order of magnitude.  It has generous formatting and is an easy read. The art (which I thought rather amateurish in SOTR and isn't much better here) thankfully takes a back seat to lots of great colour photos of minis AND examples of gameplay.   It has plenty of fluff - 22 pages of it - to support the background and factions, and evokes the mood of Victorian sci fi horror well. I'd rather the fluff was in the back rather than the front of the book but at least it is all in the one place rather than interrupting the rules *cough* Malifaux *cough*.  In fact the well-developed factions remind me of Malifaux but I feel EotD has a stronger, more identifiable theme - Malifaux tries to do too much with its wild west-goblins-undead-magic-steampunk-demons-mechs that its background universe is positively incoherent. There are marker templates and a 1-page quick reference sheet which highlights how simple the game is.
Overall: Well laid out, great photos - well worth the price of admission. 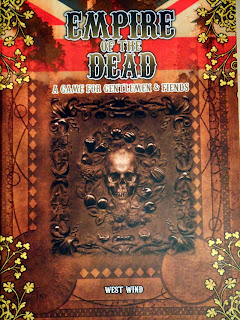 A nicely presented rulebook, solid value - I have few complaints

Mechanics:
The stats are VERY vanilla.  In fact the stat lines of  Movement-Shooting-Melee-Strength-Toughness-Attacks-Wounds-Morale-Magic are basically a direct rip from 40K, LOTR, Mordhiem and many similar wargames.  This is not surprising, as Andy Chambers (a GW pioneer) is behind both SOTR and Empire of the Dead. EotD switches to d10 which is a great move as it offers more (and more gradual) modifiers and degrees of ability. In addition there isn't the need to make a series of rolls (i.e. roll 6, then roll a 4+ on a 2nd dice) like games using the more limited d6.

Surprisingly, EotD even uses a modified version of the the rather outdated IGOUGO that has been abandoned by most modern skirmish games in favour of alternate movement, in a further nod to its GW roots.

Actions include the usual walk-run-charge; units can climb, jump gaps, fly and fall.

Missile attacks roll to hit, then to wound (on a universal  'opposed' table). The d10 allows modifiers to be "built in" to the stats and the hit and damage rolls rather than needing an extra"save" roll like GW games.  There is an overwatch mechanic - which always adds more tactics to a game.

In melee, players roll as many d10 as they have attacks.  The highest dice (after adding or subtracting modifiers) wins.  If they tie, the player with the highest combat score wins.  Basically identical to GW's Lord of the Rings skirmish game. However in this case I feel a d10 is not as good as a d6. I'm not a fan of this mechanic and the d10 makes it worse.  The "Melee" rating is almost irrelevant; a melee level 8 super melee expert ninja has a 60-40 chance to beat a melee 1 weakling grandma.  A level 2 peasant has the same 60-40 chance of beating the grandma. Having a higher melee rating makes only a 10% difference in any case.  Multiple attacks are disproportionately important. If the "weakling" has 2 attacks, he would probably defeat the super ninja most of the time.
Like in the missile phase, the winner then makes an opposed roll against the loser (strength vs toughness) to wound.

The "opposed roll" is made on a chart similar to the 40K/Warhammer/LOTR  Wounding tables, and showcases the extra choices of a 10-sided dice. To be honest I don't see the need for a chart - simply adding a d10 to each model's stats works well for opposed rolls. On the other hand, the opposed chart is used for all opposed actions so at least it is consistent - you only refer to 1 chart.

Wounded models roll a d6 on an injury table and can be:
dazed (with  penalties to dice rolls) staggering 2" with a compulsory movement; it can defend itself but cannot damage foes or initiate attacks; automatically recovers next turn
down - crawls 2" towards cover; recovers if rolls '1' on d6 injury table (a 2nd "down" removes)
removed from play - seriously injured, maybe dead 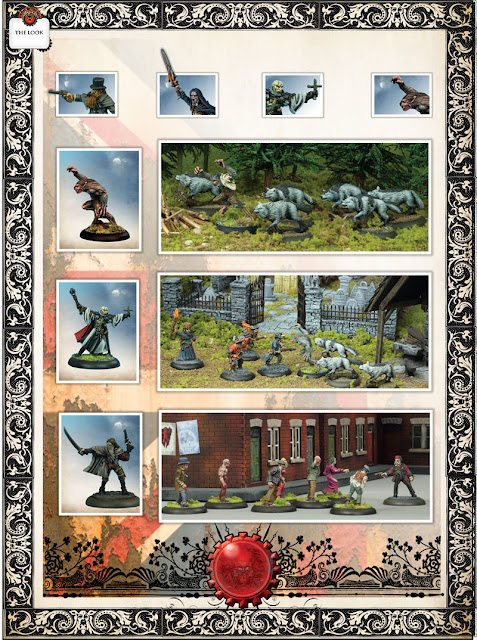 I really like the selection of spells and powers which offer a good range and really "fit" the genre well. Vampires can mesmerize targets, clerics can bless weapons, trap demons and smite the supernatural.  Undead and vermin can be summoned.  Those with the foresight to see the future can re-roll dice.

I also like how supernatural creatures cause terror on mundane (normal) opponents but also test for terror themselves when confronted with a crucifix, for example.

Overall: Pretty much Lord of the Rings Skirmish with a new coat of paint, d10s and a better magic system. Calling it original is like respraying a Ford Fiesta, fitting it with race tyres, and calling it a Corvette.  However it IS a slicker, more evolved version of well-loved campaign games like Mordhiem, and familiar GW-style mechanics make it easy to learn.  The d10 generally was an inspired move but I feel exacerbated problems with the melee mechanics. The core rules take only 22 pages and the magic rules another 8 - simples! Campaign System
This is the remaining 95 pages of the book.  Creating a faction is simple - you may only have up to 1/3rd of your force as heroes (who seem to have the all-important extra attacks and wounds; they also can use all the cool toys and exotic weapons) the other 2/3rds are made up of minions.

Factions are
Holy Order - a "good" aligned faction of templar monks from the Church who can bless their weapons
Lycoans - "neutral" faction who have werewolves, wolves and human servants.
Nosferatu - "evil" - vampire lords, their consorts and their thralls. Weaker in daylight.
Gentleman's Club - these come in several flavours
Diogenes Club style "Sons of the Empire" - a good faction
Darkfire Club of evil occultists and necromancers
Wulfen Jager - "good" hand to hand experts who hunt monsters
Zendrians - Prussian officers and swordsmen (neutral)
I suspect there are more factions to come.

Weapons, Equipment
There are plenty of weapons from brass knuckles, stakes, halberds to shotguns, heavy revolvers and hunting rifles.  One of the better weapon lists I've seen lately with 25+ choices. 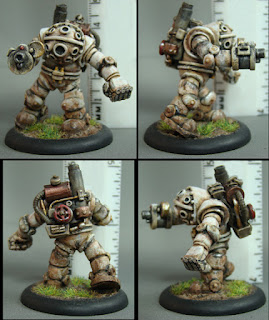 Campaign Play
There are 5 scenarios and 5 randomly generated areas from residential areas and sewers to countryside.  There is plenty of detail in the scenarios but I would have liked more choices.

Players have 500 shillings to buy players and equipment, hire mercenaries or purchase "Influences"

After a game, injured players roll on the injury table and suffer a range of debilitating effects, or even become "unhinged" which means they might go mental or rock in a corner after failing a morale test.  Models can visit the doctor to be healed, sell equipment at a pawnbroker, or be arrested by the peelers and lose all their equipment.

Experience is "bought" by paying 10 shillings per advancement roll.  Each player can roll once and may choose from one of the three tables - to increase their attributes, generic skills or faction-specific skills. There are 37 skills that can be gained, from "Regeneration" and "Luna Sight" to "Marksman."

Calculating the value of warbands is easy - starting cost of models + treasury + money spent on upgrades.

"Unusual Occurences" can also be bought and use to influence in game play. One unusual occurrence can be invoked per hero.  They include "Full Moon"  "Holy Ground" and "Angry Mob" - you can guess how they would be used in gameplay.

Overall: A pretty straightforward system which seems to cover all bases thoroughly; plenty of equipment, skills and abilities to suit the genre 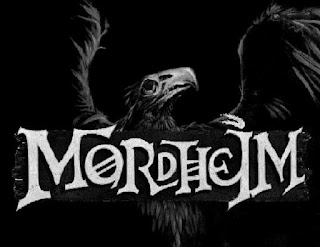 For those looking for the "next Mordhiem" - well, this is it

TL:DR  An evolution, not a revolution from Mordhiem.  In fact the game is simply GW's Lord of the Rings skirmish game  (or "Legends of the Old West/High Seas") with d10s. Andy Chambers has shown with Starship Troopers (and to a lesser extent SOTR) an ability to innovate beyond GW's stagnant Yahtzee-with-lots-of-expensive-models rulesets but this is simply a copy and paste job, with a more interesting magic system than the rather bland choices in LOTR.

However  LOTR (the best of GW's "big three" games) is a solid platform for skirmish campaign games (as proven by the success of the spin-off Legends historical series); the use of d10 is a positive move, and the game will be easy to learn/introduce to new players. The factions, fluff and campaign system seems solid.  I have concerns about melee (or the supreme importance of multiple attacks > pointless actual melee skill) as peasants dual-wielding bread knives are likely to defeat a single attack super ninja, but this is simply solved by giving the super ninjas extra attacks.

In summary - similar to Lord of the Rings Skirmish in mechanics, and Mordhiem in campaign flavour, but superior to both.

Verdict: West Wind have come out with a solid mini lineup from the get-go.  Whilst nothing revolutionary, EotD simple, old-school GW mechanics will be easy to pick up. Starter box sets are affordable and the minis are pretty solid sculpts waaay ahead of the old West Wind stuff. If you like steampunk, Victorian horror (vampires, werewolves, Jekyll-Hyde etc), or campaign games; or your old Mordhiem/Necromunda group wants to move on to something better and fresher, you can't go past EotD. Recommended

Other thoughts:
Chaos in Carpathia (a $10 pdf) would be a vastly cheaper option (married with Blue Moon's excellent range of 15mm minis - you get a warband for $7 and a mass of 30 zombies, civilians or monsters for $15)

I also liked Strange Aeons -  similar in price to EotD, but is more narrow in scope - it deals with Cthulhu and cultists (1930s pulp). It is also not directly competitive (players warbands do not directly fight each other) which reduces cheesy builds and unfair mismatches, but since it is so niche, and everyone is the "good guy" faction it might not have the same replay value.

All different "flavours" - all worthwhile games.
Posted by evilleMonkeigh at 06:57