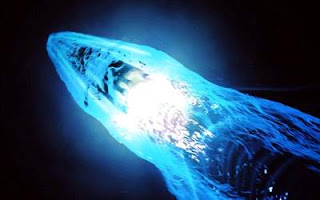 A sleek subfighter "flies" through the water, encased in its vapor "bubble"
Activation
Activation has moved beyond IGOUGO and written orders, in most games, to alternate activation, sometimes with reaction systems. However I think activation is treated like an afterthought in most rules. In only some games (like Infinity and to a lesser degree Ambush Alley) is activation an important part of the game.

Activation Mechanic
Each player chooses a sub.  They make an "Opposed roll".  The winner can decide
(a) to activate his own sub
(b) to force an opponent to activate one of his subs (unconfirmed contacts cannot be moved)
If option (b) is chosen he can continue to force opponents to move for each contested roll he wins if his opponent has equal or greater number of subs; but in any case he must activate the sub he is using to roll with before activating any other of his subs.

Undetected Contacts
Undetected subs (in "stealth" mode) have an advantage and can re-roll their initiative dice against "detected" foes.  They also cannot be "forced" to activate except by another stealth submarine.


Tailing
If a subfighter is at the same depth and within 4" of an opponent's rear arc, he may make an opposed piloting roll to "Get on his tail". If he succeeds, he is regarded as "Tailing". This may be done at the end of his move, after attacking. This gives a few benefits:
(a) he may force the opponent he is "tailing" to activate then instantly follow himself
(b) he gets a free burst of fire if his opponent moves out of his forward arc

If the attacker wins he is "on his tail"

"Staying on Tail" test
Make an opposed roll. Same modifiers as before.
If the attacker loses he "breaks off" the attack - he must activate and move first AND he cannot attack the sub he is tailing.  If the attacker wins he stays on his foes tail and may choose
(a) to remain stationary and let his opponent move away (getting a free snap shot as he does)
(b) follow his opponent's moves and remain on his tail

Evasive Action
If his opponent successfully performs a "drag turn" there is a further implication: if the tailing ship fails to pass his piloting test he suffers the effects of a failed drag turn as usual

You can see performing a drag turn is a good way to shake a pursuing opponent; but it is fraught with risk if it fails, leaving the subfighter a sitting duck.

Command Points
Each commander has "command points" equal to his "command" rating. He can spend them to add +1 to activation opposed rolls.


Reactions
Sub-fighters may "react" to enemies who are
(a) passing within cannon range and within the zone of fire
(b) attacking them
Make an opposed roll. If the "reacting" subfighter wins, he can either
(1)"snap shot" - fire a brief burst at the enemy (missiles cannot snap shoot due to locking time)
OR
(2) "evade" - have a +3 bonus against enemy fire
The active player gets to complete his attack or move after either of these actions.
If the reactor loses, he cannot shoot nor receive a defensive bonus; the active player continues unhindered.

I also might allow  subfighter pilots and wing-man to move simultaneously, and perform any piloting rolls with the skill of the best pilot. The wing leader will get +1 to his attacks as he can concentrate on them knowing his tail is covered by his wingman; the wingman gets -1 to attacks as he is covering the tail more than attacking; both get +1 to any activation rolls due to teamwork and+1 to  avoid incoming fire. 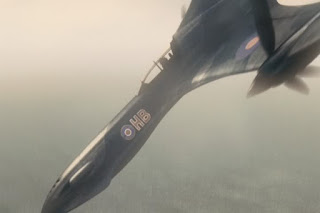 Thoughts: We have an element of resource management (command points); opposed rolls to make activation a contest, and made "tailing" a beneficial position to add to the "dogfight" feel.  I think the vibe of this game will be part WW2 dogfights, part modern helicopter (due to ability to "hover", and importance of stealth and missiles); and part cat-and-mouse submarine game.

The "tailing" rules will need some tweaking and I need to see how the activation system is used or abused before altering it.
Posted by evilleMonkeigh at 19:00