Wow, the blog has been neglected of late (reason: no meaningful shed time, thanks to my "helpful" 3-year-old and highly mobile/adventurous 8-month-old).

Anyway, a quick heads up on the HaT 28mm.  I liked the Almoravids as both a generic Middle Eastern/Arab army and perhaps to fill in as LOTR Haradrim (the original models are now ludicrously expensive on Ebay).  At $20 for 32, the price was right for a test purchase.    But that's what I thought about the Wargames Factory vikings, and they turned out to be rather crap with weird poses and flimsy weapons.  So how do the HaT guys line up? 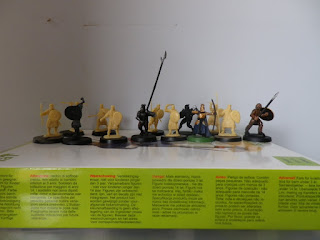 Here are the HaT minis alongside an assortment of Gripping Beast dark age warriors, and LOTR Uruk and Elvish warriors.  An Infinity model is in the background. 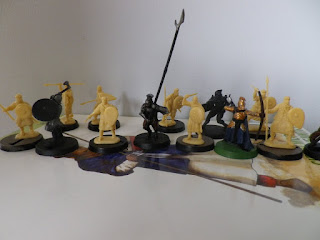 It's quickly evident that they are more 25mm (or "realistic" proportioned 28mm) rather than what I would call "normal" 28mm. They do fit with the Perry LOTR stuff at a pinch, though. 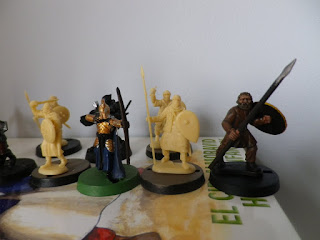 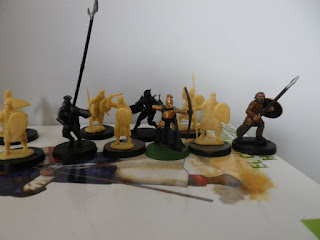 You can see whilst the HaT guys look OK next to the LOTR stuff, the Gripping Beast spearmen on the right has far bigger head and hands aka "heroic scale".  I actually was compelled to double-check the HaT packet to make sure I hadn't got 20mm or 25mm by mistake.  No, it says 28mm. 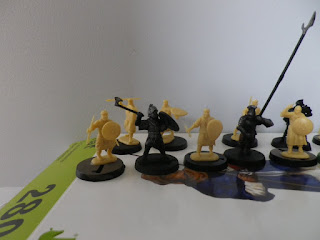 As you can see: not really compatible with GB stuff, so not so useful for SAGA etc.

Well I have bad news.  The "realism" extends to the weapon proportions.  They are horrifically flimsy and quite a lot got bent/broken simply getting them off the sprue.   They are even flimsier and more fragile than the Wargame Factory viking weapons (of which more than 50% of the weapons broke with me simply shifting them around in my shed, let alone the casualties that would occur with hardcore transportation/gaming).

The brittle cheap plastic of which they are made doesn't help; I almost snapped a few minis off their bases at the ankle when cutting them out of the sprue.    On the upside, the shields attach firmly and well onto LOTR-style nubs, but shields seldom tend to be an issue anyway and it may limit pose-ability for some.

- horrifically flimsy weapons; breakages are a 100% certainty; difficult to cut neatly off sprue
- difficult to get off models sprues due to flimsy plastic
- noticeably smaller than most popular 28mm; truescale heads and weapons

VERDICT:  No.  The price is very good and they are sensible multipurpose sculpts, but I'd suggest you pay a little more and get something more solid.  Though I am not a scale nazi, I think they look too weedy compared to the 28mm Perry/GB plastics (which I regard as the "benchmark") so that's strike two.