Here's this week's 24+cool stuff paint list. It was pretty dull and slow - drab colours, yet needing to be individualised as orcs aren't uniform.

The depressing bit is the 32 orcs I painted are probably only 1/3rd of the base rank and file of Mordor orcs I own....   Way back, between LOTR and the Hobbit movies there was a lull where you could find plastics in job lots for for 50c each, and metals and monsters for ~$5-10. I kinda went wild and now either (a) I face an embarrassing unpainted mountain or (b) I can get rich off eBay - depending how you look at it.

The trolls are terrifically heavy lumps of metal which I have concerns about on the table (a bit like some of the old top-heavy Warmachine metals). 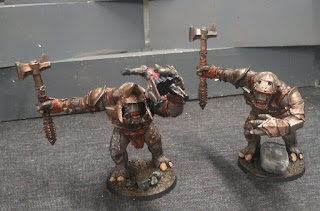 Quite a few of the job lots had broken models in them. Given most plastic rank and file are $3.50AUD each now I have either repaired them with Perry/PSC bits or they serve otherwise, like this luckless man of Minas Tirith. 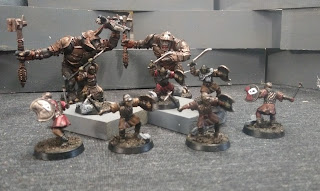 The paintjobs are pretty basic. I'm going to reward myself by doing more colourful Galadhrim and maybe the plastic Fellowship I have.  I have buckets of unknown metals and heroes (especially orcs - all orcs look alike to me!) so I'll be spending time in the unofficial collectors guide.

I haven't had much time in my shed due to rellies visiting so I'm quite pleased with my progress given it was snatched moments at my office desk.

I'll probably do another game design post soon - I'm thinking about "mental pressure" - this is not complexity, but rather unrelenting involvement and decision making which even a simple ruleset can exert. I.e. chess is simple but can have relentless mental pressure. Basically, you know those decision points (moments of player agency) I like so much?  I'm beginning to think sometimes you can have too many of them, especially if there are other layers (like magic or campaign rules) which are important to the game.

Posted by evilleMonkeigh at 01:21 6 comments:

On holidays I usually set myself a 24+cool weekly painting goal - at least 24 boring-ish minis and then a handful of cooler things like heroes or side tasks.

I've decided to make more inroads in my huge LOTR:SBG pile, given I am reading LOTR to my 8 year old. On a side note - good gracious Tolkien was a fantastic worldbuilder but would benefit from a good edit. For a man who pretty much pioneered fantasy he never was one to leave an eating scene/scenery description/random song or poem out. As a main character Frodo is bland - the characters are all pretty much just one dimensional 'scenery.' The pacing feels off in places. Tolkien certainly is the godfather of fantasy genre and he certainly knows how to give his work a historical/mythological feel, but a great all-round author? Hmm. It's one of the few times I'd say movies are probably better than the book. Except for the magic green ghosts winning the final battle.

But I digress. Back on topic: 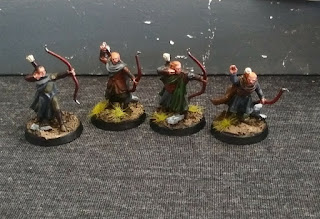 I thought my daughter might like to try some LOTR:SBG - in my opinion probably the best, most clean/simple rules GW has produced. (Yeah I know there is a newer rule set - Middle Earth - but locally it's $90AUD - about $65USD - for just the base rulebook. Also, I bet it has been needlessly complicated)

I'm focussing on rangers, uruks, warg riders, wood elves etc - all the earlier stuff from Fellowship. I'll probably do some Mordor, and then finally finish with Rohan then Gondor.

As usual, I go for tabletop quality and speed. At the ripe age of 40 I find it harder to sit still for more than an hour at a time any more....

Now, for my random project. Mantic's supremely affordable 28mm hoverbikes ($15USD or $20AUD for 4) are as cheap as most 15mm stuff so I grabbed some for some Wipeout-style racing. I love the idea of Gaslands but I just find the rules too clunky to enjoy. So this is an excuse to fiddle with my own more streamlined rules. I'm thinking vector/drift mechanics (which I often play with in space games) may be fun. Also, Byzantine chariot-racing style, it will be around small arenas. I'm figuring 4 bikes or 4 teams of 2, depending on how fast playing the rules are. I want a round to last 30min or so max.

My not-McLaren and not-Williams inspired speeder bikes. I have to tidy them up with more detail but they are 90% table-ready. They come with gun/missile/cannon pods which I'm going to magnetize to swap out. I'm also going to allow each team to have 3 "perks" or "changes" to tweak their otherwise similar bikes. I.e. slight 10%-ish boosts to turning, acceleration, straight line speed, armour, handling etc.

We'll see how well I keep to this.. I'm notorious for getting sidetracked. I mean, it's a hobby, for fun. Rigorous schedules are more work.

Posted by evilleMonkeigh at 19:48 2 comments: