Why do Aerial Wargames Suck?

I own quite a few aerial rules, and a quite embarrassing number of 1:600 aircaft (a surprising number of them painted; they're rather easy and fun to decorate).  But I rarely play - there's always something in the various rules that mars my enjoyment.

They don't even have to be hardcore historical.  I'd love to have pulp games where 1930s or 1946 weird fighters landed on Sky Captain/Avengers style flying carriers, or Yukikaze-style modern jets flying through a wormhole to duel in alien skies. Sky pirates, Crimson Skies style.  Dogfights amongst Last Exile style flying battleships.   Campaigns interest me - be it a squadron of Flying Tigers, a Battle of Britain squadron or a rag tag bunch of sky pirates, I'd like to see aircrew develop and be replaced, Mordheim-style.

Here's some of the games I own.  They range from WW1 to modern jets.  I'm going to go through and check/re-read my collection again in the next week, but here are my offhand recollections.

Algernon Pulls It Off
Same comments as Bag the Hun, only even more chaotic and irritating.

C21: Air War
(+) Good selection of aircraft
(+) Handles decent amount of planes/plays quickly
(-) No altitude(!); this is the wrong thing to abstract!

Wings of War/Wings of Glory
(+) Card based movement is interesting
(-) Guessing game mechanics
(-) Expensive/stat cards required i.e. "decks" for aircraft
(-) Only 1-2 planes per side 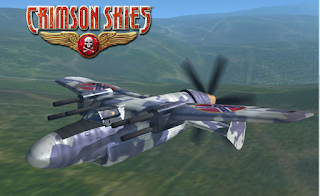 Hands up to those who remember Crimson Skies?
But never mind pulp air wargames, ANY good aerial wargame will do...

Sturmovik Commander
(+) Free
(+) Handles 8-12 aircraft
(+) Lots of aircraft choices
(-) Reminds me a little of Imperialis Aeronautica, but has written orders


I've heard of, but either don't have or can't recall....
AH's Flight Leader (OOP), Speed of Heat (too pricey), Birds of Prey (too complex, too slow); Fox Two Reheat (same guys as Scramble!) - also, I have in general dismissed any board games as the buy-in is too high to merely "test" a rules set on someone's say-so.


So, after all those games, what are you looking for?

*Pilot skill paramount
*However, planes SHOULD be differentiated i.e. P47 dive, Fw190 roll rate, Zero wing loading/turn
*Spotting important - most fights won without the other side even seeing them; obviously this is not overemphasized as it isn't too much fun, dying before you can react; but it's an important element
*Energy management - trading of height for speed and vice versa; extreme maneuvers bleeding off energy
*Represents chaos of dogfight; no "tail chasing" where players take turns being on tail/shooting
*Does not require stat cards etc (a la Wings at War) + unit builder for balancing scenarios
*Can track stuff without expensive fancy bases or (preferably) hex maps
*No written orders or guessing game mechanics; consistent mechanics
*Minimal record keeping/fast to play - a game about high speed dogfights should play fast; preferably no hitpoints
*Allow to handle a decent amount of planes (or I'd simply play a PC flight sim)
*Inexpensive (not a boardgame?)
*Campaign system to allow the players to "run" a squadron

Like naval (and to a degree, space) combat, aerial games seem to resist the innovation sweeping through wargaming; many rules are just a re-polish of rules from the 70s.  Is aerial combat just too complex a topic to be successfully shown in a wargame?

Aerial wargames, for me, invariably fall into what I call the  "PC Game/Tabletop Overlap." Sometimes I'm playing a PC game and I think  "this might as well be a tabletop game" or  "I'd love a tabletop version of this"  -  other times, the opposite is true - when playing tabletop games like, Star Fleet Battles, Battletech, most age of sail and aerial games, I think: "I'd be better off playing this on PC."   Often (in the case of Battletech) this is to do with recording - i.e. who really enjoys tracking all those damage boxes in Battletech?  Other times, I prefer big battles between big blocks of troops (ancients, Napoleonics) on PC so to avoid tedious painting.  But other times, I feel that the rules for the genre simply aren't particularly good or enjoyable.

Perhaps my tastes have changed - maybe I'll find an aerial wargame I enjoy; after years of giving up on the genre.  Maybe I will finally find one to my taste.   Do you have any favourites you recommend that might meet most of the criteria?

But here's a broader question - are there any good aerial wargames, really? Are aerial duels a genre that are by nature ill-suited to the tabletop?
Posted by evilleMonkeigh at 09:05