I know I'm a bit late to the party, but my Dreadball set has been sitting untouched in my shed since 2016 or so - I remember picking it up for around $50AUD on a clearance sale as I thought it looked worth a punt.

I remember being unimpressed by the minis - they were nowhere near as good as the Bloodbowl ones I coveted in my youth (I say coveted rather than owned - I played a LOT of Bloodbowl using plastic counters proxying for minis). The Dreadball stuff was diminutive, and had repetitive poses. 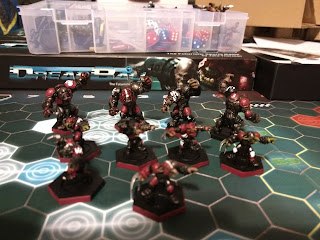 Digging through my 1st ed box, I wasn't particularly impressed with the stuff inside - it seemed cheap, flimsy, and cut-budget.  The cards and dice seemed rather "got this in a $2 shop" quality.

Anyway, what inspired my to dig it out? Well, Blood Bowl 2 the PC game was $14 on Steam over Christmas and I've been having a great time reliving my youth. (My 4-year-old son actually really enjoys watching it, which is surprising as a turn-based-PC game is rather unspectacular graphics-wise). I noticed that Games Workshop has actually reasonably priced its Blood Bowl release ($150AUD for starter box + $50AUD per team). Well, reasonably compared to its insane prices elsewhere and par for the course for a boardgame.

I was tempted, but... then I recalled the two-hour games, how you'd have to play out turns when you have no hope of doing anything before the half ended, how setup took ages... and the arcane, convoluted, very-1980s rules. I mean - who was I going to play Bloodbowl with? Would I be willing to guide people up the steep learning curve? Was there a simpler option? 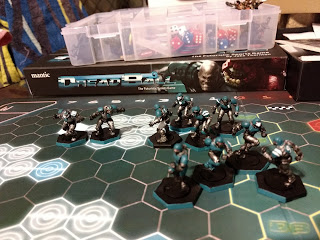 Hence, digging out my old Dreadball box.  From my playtests ages ago, I dimly remembered it had only 5 activations, and games flowed as the teams did not reset after a score. It might be possible to finish a game in a third of the time!

I played a few games against myself and was fairly impressed. Whilst the minis are uninspiring, the rules themselves are probably the best bit. Without fully getting into the cards and fouls (the 1st edition box REALLY needed a fast-play/quick reference guide) the game flowed well and was quite exciting. The rulebook itself was easy to read, but badly laid out. I.e. it was easy to understand the rules, once you found them. In addition, the dice rolling and mechanics were quite consistent and modifiers were both minimal and easy (removing or adding dice).

Probably my biggest gripe was that some player positions (guards) cannot pick up the ball at all. This seemed quite contrived, and a step back from Blood Bowl, where even clumsy Ogres have a chance to pick up the ball.  Also, the campaign rules are very lacking compared to the characterful detail of Blood Bowl. 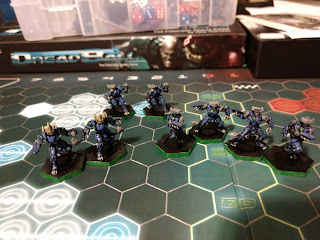 I also think that sci-fi fits the combat-sports-genre better than fantasy, heresy as it is to a old Bloodbowl fan. On the upside, Dreadball box sets are available under-the-odds on ebay, which made the price good despite the rather uninspired sculpts. I picked up a box of some Hammerhead-shark-dudes for $25AUD, then went one better - a complete Dreadball Extreme box set (with three teams, heaps of free agents, and another set of rules/dice/board etc) for $25AUD. Bargain! (Also, the included crates and terrain will be used for other games). 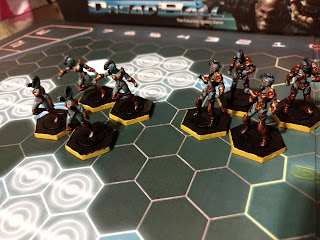 Of those teams, the Bremlin Nebulas (above) showed the blandness and lack of variety of the poses, but I was pleasantly surprised by the sculpts of the Convicts team (below). In addition, the box contents had improved somewhat and the new rubber game mat was quite nice.  I just wish they wouldn't include the unnecessary casualty minis but instead more variety of normal poses (I mean, for a casualty I can just tip a model on its side, put it in the dead box etc). 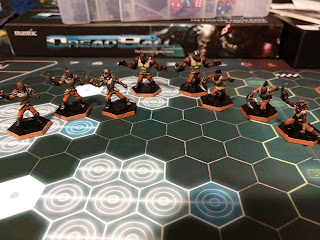 Obviously Dreadball moved over to 2nd edition a year or two ago, and given Mantic have the rules as a free download I'm not complaining. From my read through, 2nd Ed seem to be an improvement, with teams tweaked, jacks (the allrounder player) made more useful, and the players stat line changed to allow more nuanced variety. Apparently the campaign rules were improved but that wasn't par t of my free downloadable copy.

Anyway, for $100AUD (50 pounds or $67USD) I have 2 sets of fields, dice and counters, as well as 6 teams and assorted free agents.  Enough for a league! Mantic have a Dreadball sale on at the moment, so I'll probably pick up the new rulebook, cards and a few more teams while they are 50% off.

This isn't really a rules review (I could do one when I get my shiny 2nd ed rulebook, but I'm sure there's heaps out there) but I probably will be doing more Dreadball-centric posts as it's a game where I can actually play a round before my kids descend on me.
Posted by evilleMonkeigh at 05:03 2 comments: