A packet of Quar arrived in the mail today. You may ask: What is a Quar? 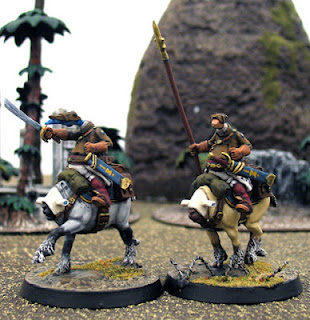 They are goose-necked aliens in various hues, fighting a Royalist v Crusader civil war with alternate-WW1 weapons and tactics.  The world of Quar is supported possibly some of the most characterful minis and rulebooks I have ever come across, produced by Zombiesmith.

The Quar, along with my Secrets of the Third Reich mecha, are unique in that even non-gamers pause with interest to examine them; my long suffering wife (who usually ignores wargame parcels) always recognises them and breaks open the parcel for a look.  In fact the Quar now even have their own short film!

They come in 28mm and 15mm versions, but it is the rules I am focussing upon today. I'm using photos from the official Zombiesmith website so visit there for more eye candy. 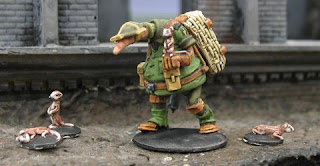 What other game has rules for messenger squirrels?

The Shiny
This rulebook is very, very shiny. And I do not mean this in the traditional hardbacked-glossy-embossed-cover sense.  This is, quite simply, my favourite rulebook.  An obvious labour of love, the simple rules are accompanied by gorgeous, characterful sketches, maps, full colour artwork and pseudo black-and-white images.  It is a 109-page softcover, but I would have no hesitation in using it as a coffee table book. A rulebook to read for enjoyment. The rules are simply laid out with a solid table of contents, complete with a quick-reference page at the back.

The Fluff
Now I often regard "fluff" as a waste of space, distracting you from the main rules (*cough* Malifaux *cough*), an excuse for enthusiastic but unskilled writers to inflict their meagre talents upon us, and a crutch to those wargamers with little imagination.

The Quar fluff is matter of fact, almost historical in nature, with a tongue-in-cheek nature that is warm and amusing.  There are poems and songs - I would normally dismiss these ruthlessly as "over indulgent" but for the world of the Quar, they "fit." 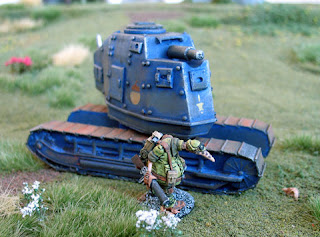 Mechanics
The rules follow the "Song of Blades" mechanics;  each side has "rhyflers" who have two primary stats; Combat and Quality.

Rhyflers roll one, two or three dice against their Quality. If the dice rolls equal or exceed the Quality rating, it succeeds and gains an Action (which can be used to move, shoot or melee or take a special action). Choosing to roll more than one dice can lead to several successes; which means a model can take several actions.  However there is a clever risk-v-reward element in play; two failures in a single roll means the turn passes instantly to the opponent; any un-activated models on your side simply miss their go.

Movement differs from normal wargames in that movement must be in a straight line.  The only way to go round a corner is to use a 2nd action. This adds an interesting tactical choice. There are the usual rules for climbing, rough terrain, falling and bashing inanimate objects like doors.

Results can range from outright dead, to incapacitated, pushed back or knocked to the ground; depending on the margin of success.  Injured and out of action figures are shown by tipping them on their side. No "special counters" needed. The range of results is satisfying - knocked down figures are at a disadvantage; recoiling figures are pushed back, and "out of action" figures can be revived by a medic.

Ranged combat is similar, only instead of being "Knocked down" or "Recoiling" minis "Go to Ground" and may crawl toward cover; or are "Shaken" which takes longer to recover from.  Smoke and poor visibility can reduce engagement ranges.

There are rules for weapon jams, thrown weapons, automatic fire, and crew-served weapons like belt-fed machine guns. Area effect weapons are quick to resolve than usual - the opponent chooses the scatter direction if a shot misses.

Morale is resolved by rolling 3 d6 against the Quality of the rhyfler.  Failures means a rhyfler will withdraw from opponents; the more failures the further he flees. You don't need to test to often - when a friendly suffers a "gory death" or for each casualty once the squad is below 50% strength.

Units may concentrate their fire, go on overwatch, regroup or attempt to heal incapacitated comrades.

The core rules are about 30 pages long. 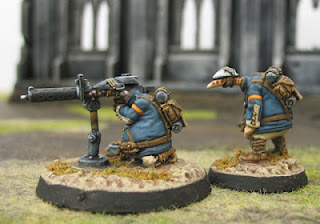 Units and Organisation
The remainder of the book deals with units - the forces of the Commonwealth, Royalists, and the Partisans.

Stats are simple - two stats, a few "traits" and weapon info. Here is one of the most complicated ones:
Militia Officer  C2  Q3;  Leader, Green; pistol, bolt action rifle

There are about 30-40 traits which, given each soldier seldom has more than one, are not difficult to keep track of. You don't need to look up a special unit card to understand them, either.


There are 10 missions/scenarios; some general, some specific.


TL:DR
A beautifully presented gateway into the quirky world of Quar, the book is a fun read as well as being a simple but solid skirmish ruleset, based on the Song of Blades game engine. Interesting risk vs reward activation, varied combat results, and no record keeping - games can be played in 30-60 minutes allowing a series of linked games to be played in an evening. True, the rules are somewhat Quar-specific; but each side only needs 5-15 minis, making the game affordable to try out.

Recommended? Definitely. The rulebook is very "collectible"  -  as well as being a good set of rules - and the Quar minis are addictive, with bucketloads of character.  The 15mm Quar also fit well into any 15mm sci fi universe. All Quar gear is 15% off in June, so now would be a good time to buy. 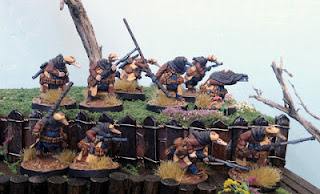 The Kryst Sandstalkers are a new faction and have a "desert tribesman" feel.

Note: The Quar are supported by a slow but steady trickle of releases; but this month two new factions have appeared.  The Zombiesmith crew werelargely part-timers so don't expect the lightspeed delivery times of Khurasan or GZG, but this is being addressed by adding a full time staffer. 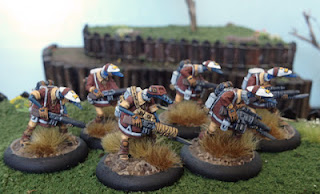 The Toulmore Veterans are the 2nd new faction.  The Quar world is expanded in supplements "OF Spats and Pedrails" and the new "Tales of the Breach" which has 30 new missions.

EDIT: The platoon/company level game "This Quar's War" (which I suspect is aimed at the 15mm Quar) is free on the wargame vault and will give you an idea of the art and world of the Quar
Posted by evilleMonkeigh at 18:42