I got this a while back while searching for a swashbuckling miniatures game - I was wanting a rulset to handle my Warlord 30YW, Helldorado minis, and my Black Scorpion pirates. I think they are by the same guys who did .45 Adventures, a well-regarded set of pulp skirmish rules. 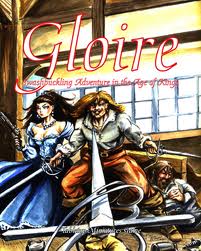 The combat is simple, but Gloire contains more record-keeping and stats than most RPGs.

The Shiny
The pdf is 101 pages - a rather largish print off. It is B&W with a colour cover.  Illustrations are sparse, but I had no trouble reading through it.  The combat tables were not as easy to use as I would have liked. I found the ruleset a tad hard on the eyes.That said they were written with a lighthearted feel, and have a pleasant tone as you read.

Mechanics
The game uses d10s, which I approve of heartily.  The old chestnut that d10s are not easily available just doesn't wash anymore, and a d10 offers more options and more gradual modifiers.

Models succeed in actions if their stat + d10 equals 10 or more.

Initiative & Actions:
The models with the highest dodge goes first, then the next highest etc.  Roll d10 to see who has the initiative; which means the initiative player wins any ties (when models have equal dodge stats).

Players can perform one action per activation; a move, jump, climb,  melee, shoot, reload, etc.  Players can "hold" their action until later to interrupt an opponents' turn.

Players have "hero points" which they can use as a resource to change dice rolls up or down depending on how many hero dice they spend. This can also be used to increase the range of a weapon or move 1" per point; or increase or decrease damage taken or inflicted.  I like this as it adds an  extra element of tactics/resource management.


The Three Musketeers movie - hip revision or gauche travesty?
Given that Dumas was a pulp writer of his time, a little leeway is fair
Never did come at the flying sailship though...
Combat:
This seems to revolve around a "weapon chart" which is broken down into range bands (close, medium, long.) Within each band, weapons are rated for Range, "To hit" bonus, and "Weapon Strength" which is compared to target Defence.  Weapons include rapiers, whips, pistols, muskets, and similar swashbuckling gear.

Combat is resolved by attacker's melee/musket + d10 vs targets' dodge + d10; if the attacker wins it is a hit.  There are also rules for suppressive fire (forcing morale checks).

Then roll a d10 for location.   If weapon strength exceeds defence rating, a box is crossed off for that location (i.e. head, torso, arms, legs).  Whoa - wait a  minute! Ticking off hitboxes on specific damage locations?  If the defence exceeds weapon strength, roll d10 and add the difference tot the roll. If the roll is 10+, the damage is prevented.  A little confusing as one minute a high roll for the attacker is good, the next minute it is bad.

To add to my ire, the game adds totally uneccessary record-keeping in tracking ammunition. I mean, it is probably safe to assume that a model will have more than enough ammo for a short skirmish, given the slow reload time of most flintlock weapons.

Close combat allows for pushbacks, drawbacks, disengagements, repulses and turnabouts - allowing a winner to maneuver his foe around the battlefield. This adds some interesting flavour and tactical choices to fights. You can also challenge opponents to a duel.

Similar to "Flashing Steel" there are improvised actions that allow swinging from chandeliers, improvising attacks etc. In addition there are horsemanship rules allowing mounts to be jumped over fences etc, and rules for coaches.

At 21 pages the main rule section is not onerous but I am very concerned at the record keeping involved - far more than most skirmish games and exceeding a lot of RPGs...

Other Stuff
This is where the game reveals itself as a wannabe RPG.   There are animal rules, and rules for character creation.  Character "archetypes" show an immense array of skills - i.e.  a "courtier" has a dizzying 9 combat skills, 5 knowledge skills, and 9 other skills.  Toss in individual armour levels for 5 individual hit locations, weapon bonuses, and of course the basic 9 stats... and yeah.

Most RPGs are much simpler to keep track of.

Overall, there are about 30+ combat skills, 15 knowledge skills, and 20+ miscellaneous other skills to chose from, and half a dozen virtues and flaws.  You might as well get a fully functional RPG for that amount of detail. In fact, the Savage Worlds RPG series plays faster, is a lot simpler, has just as much flavour and can handle far more troops as a miniatures game.

As a wargame, "Flashing Steel" does the same job - with 3 stats, 2-3 traits per model, and no record keeping besides tipping a model on its side. It even has the same "swashbuckling" actions as Gloire. In fact it can do all the RPGish stuff Gloire can to boot.

Scenarios
These are very thoroughly explained and contain lots of flavour and detail. They are kinda specific though and are not generalised like most game scenarios.  "Capturing Rupert's Poodle" is not exactly as generic as "escort"  "retrieve the item"  "escape the ambush" missions most game have.

The game seems to have been written as a labour of love - it is warm, amusing - without the annoying smug tongue-in-cheek of many rulesets.   I simply wish I liked the game mechanics more....


TL:DR
Relatively simple rules, with interesting combat choices, are burdened with a ridiculous amount of attributes, skills and stats to keep track of, and heavy record-keeping where ammunition and individual hit locations and hitboxes are marked off.  Looking at the half-page stat sheets for each character will give you a clue of how involved it is.

People often call such games a "RPG lite" but that does many RPGs a disservice.  The Savage Worlds RPG engine would handle far more troops, more easily, with similar results AND is a fully functional RPG.  Gloire is simply a miniatures skirmish game with a lot of record keeping.

Recommended?  Try "Flashing Steel" and "The Savage Worlds of Solomon Kane"  unless you adore record keeping and intend to play with only 2-3 miniatures per side. They have the same flavour, with far less clutter.