These games seem something of a cult set, and seem to be fiercely loved by their fans. 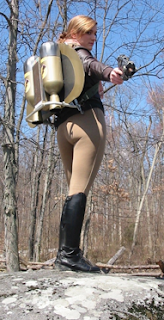 The Shiny
The pdf is short and eminently printable (40 pages) and B&W. Old woodcut pictures add authenticity. Typesetting is very Microsoft Word and I was left with an early 90s vibe.   (The rules were actually published in 2000). Workmanlike but uninteresting in design.

Stats
There are 3 main stats.  "Shoot" <--obvious  "Scuffle" <--melee and "Save" <--avoiding Bad Things.
Certainly very manageable.  Troops are designated as main characters or extras.  Extras do not even have the "Save" attribute and thus tend to perish a lot faster than the heroic main characters.

There are random attribute charts for random character creation.  There is also random weapon stat generation though I am dubious as to when you would ever need to roll for a totally random weapon with random stats.

Weapons have range, a save modifier (negative number that modifies target saves); number of shots, and a note if it needs to be stationary to be reloaded.

Vehicles have five stats - "save" <--for armoured vehicles, "speed," "start" <----roll needed to start engine, Sustain <--pass this roll or the engine conks  and "spin" <---amount a vehicle can pivot in a turn

Heroes may have 2 random skill rolls and main characters have one.  Extras may be assigned appropriate skills i.e a unit of cavalrymen might get "horsemanship."  Using only a few skills per character from a generic list of 20 is eminently reasonable; giving flavour without extreme complication; compared to the ridiculous special rules lists in games like Warmachine, Malifaux, etc.

You can also generate random creatures though, like random weapons, it seems a bit pointless - you'd tend to design a creature's stats to fit the mini, going off the example animal lists. Animals can get multiple Scuffle attacks (e.g. teeth + claws) but are similar to humans with their stats.


Gameplay
Each hero or unit gets a card.  When the card of that unit is drawn, it must make a morale check if needed; and then can perform an action, like shoot or move or reload.  Formation coherency is pretty relaxed - they must simply stay within 12" of a leader or they cannot move. Figures may only attack into their front 180d - formations fire the way individuals in it are facing.  Formations tend to contain 10 individual models.

Combat
To hit, a figure must roll under its Shoot or Scuffle on a d20 (halved at long range).  Extras must fire at whole units while main characters can target individuals.  Casualties on units are allocated randomly. Main characters can roll to "save" against each and every hit but if they fail a roll they are killed. No hitpoints - yay!  There is a d20 hit location roll for vehicles but since they are fairly rare I can handle the amount of possible critical hit types.

An average rifle is effective to 18" and ranges to 36"; compare it to infantry movement of 6" to get an idea of effectiveness of missiles vs movement. There are only cover modifiers for firing so things are pretty simple. There are rules for artillery and grenades.

Units can only charge enemies in the leader's front 180d; if they pass a morale check.  Units that are successfully contacted must also make a morale check.

Main characters that are not part of units do not have to test for morale. A d20 (modified according to circumstance) is compared against the figures remaining in the unit; if the number is equal or less than the number of survivors the unit passes. A failure could see the figures within a unit get several different results - running away, freezing, firing randomly, or even blindly charging the nearest foe!

At 33 pages the basic rules are pretty straightforward.

Battles by GASLIGHT (rules supplement)
As the rules are so easy to use, people used them for increasingly large forces. I didn't try these rules with large numbers but due to the straightforward rules and use of "units/formations" I'd say 30-40 figures (3-4 formations/units) would be fine.

Anyway the authors responded by streamlining the rules further.  Fire is done by unit, not by individual soldiers. 10-man units still exist, but a leader might command several of them in a "group".

Turn sequence is different to - each group commander mini rolls a d6 which is placed beside it. Six cards numbered #1 to #6 are then drawn randomly - if the dice matches the cards then all the group commander's units move - though movement of each unit in the group is NOT simultaneous. Ties between opposing players can be determined by a die roll.

A figure nominated the army commander can, if within 3" of a group commander, roll a d6 and swap it with the group commanders, allowing him some control over initiative sequence.

Weapons and firing is done not individually, but by unit on a table to speed things up. There are a few extra rules like vehicle ramming and running over infantry, repairing said vehicles, and infantry close assaulting vehicles. The morale rules are modified - failing a morale roll means the whole unit misses a turn rather than individually testing for each model.

There is also extra rules for randomising group orders, sniping leaders, bonuses for army commanders when attached to a unit; ammunition shortages (thankfully not using record-keeping)

There is a simple build point system included, and fairly detailed rules for giant vehicles such as landships; with boarding, fire control, piloting, morale and damage areas.


TL:DR
These rules are practical rather than revolutionary - random card activation of units, mixed with simple movement and shooting rules. The "Battles" supplement further streamlines this simplicity for larger battles. The use of d20 allows for a range of skill levels, and there are few modifiers to track.

I do like the way they handle their hero characters - a "save" that makes them tougher instead of extra wounds, and various bonuses and freedoms in the rules. Toss in a small amount of special skills and you have a flavourful character without any more record keeping or complication.

A very open-ended ruleset - I am not surprised there is a  role-playing supplement "Adventures and Expeditions" and "To be Continued" (I think all GASLIGHT works are collected in the Compendium which at $30 is pricey for a pdf but does include rpg, mass battle and skirmish games).  Most will enjoy this freedom of GASLIGHT, though some gamers might regard them as incomplete.  I don't know if they are "The Standard by Which all Victorian Sci Fi Rules are Measured" (not that grandiose a claim, considering the niche market) but , whilst nothing revolutionary, they are a simple, sensible, flexible ruleset and games toolbox.      Recommended


EDIT: I have recently reviewed another similar VSF ruleset Valor & Steel & Flesh which comes preloaded with its own Martian setting
Posted by evilleMonkeigh at 06:41