I was digging through my rules cupboard and I came across AE: Bounty.

A game I evangelized amongst my gaming buddies when it was released back in 2010, for a month it had us frantically repainting random sci fi models into "crews" or warbands.  It seems to have all the components for a great skirmish game - customizable space warbands allowing you to use any models you fancy, campaigns with experience and gear...   ...so why has it been languishing in the cupboard after only a dozen games? 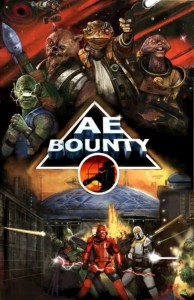 A small rulebook crammed full of content.  Good bang for the buck, very portable -  but tiny size is hard on the eyes.
The Shiny
It is a small full-colour 100-page A5 rulebook.  Rather small text will test the eyesight.  A thorough index and quick reference sections are appreciated as always, with clearly labelled headings.  Despite these efforts it is a bit dense and I found it tough to find what I needed quickly. A quality production overall though and well worth the $25.  A starter box of  5 figures costs around $15 (or you can simply proxy any sci fi models you wish) so it is very affordable to try.

I'm not a huge fan of the reto-sci fi look of their minis - their 1970s style aliens are a nice change from grimdark skullz-n-scrolls 40k but I simply don't enjoy the sculpts.

Over the Wire
This is a free online e-zine supporting Darkson games with scenarios, optional rules and characters.  They are up to #20 or so now so there is a wealth of information to draw on.  This is not a glossy sales catalogue like White Dwarf but a short, meaty selection of actual practical gaming content. If only all gaming companies supported their products with such impressive after-sales effort.

Making a Crew
AE: Bounty advertises it is for "crews" of as few as 2 and up to 15 miniatures. The templates are "2-man"  "veteran"  "standard" and "large". These are good in that they are 'point-less' and have a modicum of flexibility but are somewhat more rigid than I had hoped and have a vague 40k "army list" feel about them - i.e. a standard crew can include 1 veteran, 3 regular and 1 green unit; one unit can be upgraded and one "dirty trick" (special ability) can be chosen. You can customise this by dropping a unit 1 level and upgrading another; or having another hero or dirty trick.

Whilst this is streets ahead of say 40k, this system is actually less flexible than it seems.  Whereas some games allow you to completely stat up models from scratch, Bounty uses a series of templates.  The pirate crew, for example, has a captain, space dog squad, quartermaster, cannoneer, corsair squad, first mate, lookout squad, and a crewman squad.  The other 2 factions (bounty hunter and mercenary) have similar options. So really you get about 24 humanoid "archetypes" with set stats, rather than the complete design freedom inherent in a game like "Song of Blades and Heroes."
There are hero archetypes such as assassins, brutes, duellists and mentalists.

Whilst I like the "point-less" build system idea, I was disappointed that I could not easily adapt many of my more interesting 40k models.

There are 14 races from AE: Bounty's own universe with slight stat differences and inbuilt special abilities but that is not a substitute for an ability to stat up your own models. 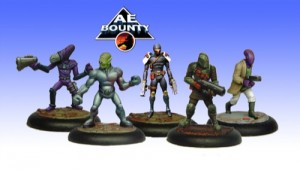 The quirky retro-sci fi aliens are a nice change. If they are anything like AE:WWII models, multi-part minis will be frustratingly fiddly to put together.

Stats
Each character has a series of action points (APs) which depend on the level of the model i.e. elite have 4AP, veteran have 3, regular have 2 and green troops have only 1.

The "wounds" reminds me - I am not a fan of squads of multi-wound figures as seen in AE:Bounty. If the the hero and leader of your warband can take more than 1 hit, fair enough, but having one squad of grunts with 1 wound each model and another squad with 2 wounds each model was jarring.

There are about 30 special abilities - from "crack shot" to "hidden deployment".  Since they are universal to all factions, they are quite manageable, compared to, say, Warmachine.
In fact, bookkeeping is quite simple, besides creating the crew at the start.

Mechanics
Units activate alternately - the unit spends all their AP then the other side activates a unit.

AP are used for movement, melee and ranged combat. Some special abilities also use AP, such as the "aim" action which can increase an attack's accuracy or power. Units can sprint, or charge.

Ranged combat is done by rolling a d6 and comparing it to the firer's RC stat.  If the roll equals or exceeds the RC stat then the shot hits.

Close combat is resolved by adding CC+d6 for each of the combatant - the highest wins.

Damage is somewhat complicated and involves several steps.
#1. Get the weapon strength + 1 or more d6.  This is the weapon power.
#2. Deduct the target's armour from the weapon power.
#3. The remainder is the number needed "save number" to resist the attack. Roll a d6. If the d6 result is equal or higher than the modified number then the target shrugs off the damage.
If the number was 7+ then a save is not possible - the attack was too strong.

I find this a bit clunky and unintuitive.

Suppressive fire can be chosen - it does no damage but causes morale tests to be made.
In melee, focussed attacks can be used (like an "aim" action) to give a bonus to strength and melee ability.  If it is not facing the model it is fighting the model's CC score is halved.

I feel that a "reactive fire" should have been included  -  not only it is a good gameplay mechanic used by many modern games, but some AE: Bounty close combat heroes can whizz into combat and carve up their foes a bit too easily and this would balance them out a bit. High level melee characters see OP - able to charge down a corridor, kill a foe, then duck round a corner without any retaliation from the gun-armed foes facing them.  I'm sure you could make house rules but it seems a bit "broken" to me and the ability to add a teleporter or flight to your models exacerbates matters.

There is also no vehicle rules in the rulebook; I know AE: Bounty is about skirmish (usually in the corridors of spaceships or habitats or spaceports) but a landspeeder wouldn't have gone amiss. However I suspect ensuing episodes of "Over the Wire" will have remedied that deficiency.

Morale
This is actually an important part of the game. "Drive" can be temporarily or permanently reduced.  Temporary drive reductions are caused by terrifying weapons or foes; or friendly units being routed.   Permanent drive losses are caused by casualties or wounds.  Once drive is reduced to zero the unit surrenders or flees. Despite having to track the drive of each unit this is an interesting mechanic and means morale has to be managed and fights are seldom "to the death" but rather when one crew breaks.

Campaign
There are about 30 weapons which cover most generic sci fi types. Slugthrowers, particle beams, lasers come in pistol, carbine and rifle versions.  Flamethrowers, grenade launchers, rocket launchers and pyschic cannons are also choices. Swords, shock gloves, pikes and heavy melee weapons are available.  There is plenty of wargear choices, such as adrenal boosters, weapon harnesses, various armour and suits, energy shields, and shock grenades amongst about 30 others.

There are 12 scenarios which can be rolled randomly. There are also 10 special battlefield conditions like toxic rain or high gravity.

There are rules for casualties after battles, and buying replacement crew.  Crew can gain experience and level up (i.e. regular to veteran etc); or increase attributes (movement, close combat etc).


TL:DR
The campaign system is simple, and there is a good range of scenarios and effects to give good variety. There is a good selection of generic wargear and equipment; and a Mordheim-style "after battle" resolution.

I'm not a fan of multi-wound squads, I think the damage mechanic is a bit clunky and tracking each unit's "drive" might not be to everyone's taste, but AE: Bounty is a solid game.  It could have been much improved by adding a reaction system, but it is simple enough to play and allows a range of scenarios including space hulk style games.

It had some great reviews when it came out, but it never caught on locally and seems to have disappeared with a whimper rather than a bang.

Recommended?   It's a good, solid little game and has a surprising amount of content packed into its 100 pages. The range of gear and scenarios is great.  However it does not allow you to use any sci fi mini in your collection like is advertises - the 'crews' are more like super-flexible army lists, for three humanoid-only armies. Of course, within that is quite a lot of scope for conversion or proxying.

Perhaps the main issue is that gameplay-wise AE: Bounty cannot compete with the superior tactics, models and innovation of the higher-profile Infinity in the sci fi skirmish arena. Much as I like campaign play, the current level of customisation, while good, just isn't enough to push AE:Bounty over the line.   For $25 AE: Bounty is cheap to try - but I'd suggest the free Infinity rules if you are interested in humanoid-based sci fi skirmish; or the customisable and 1-page customisable FUBAR free set (which includes 40k-specific spin-off "In the Emperor's Name") and adding your own homebrew campaign rules.
Posted by evilleMonkeigh at 04:42