Strange Aeons is a niche game in a niche genre, with a distinct 1920s Cthulhu vibe. Using only a 2' x 3' playing area and a maximum of about 10 models a side it certainly is not going to break the bank or gobble up too much storage space, and I reckon my Terraclips will provide decent boards. 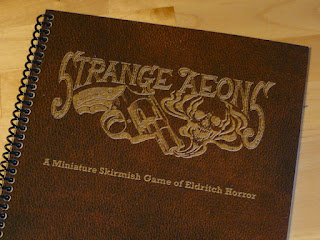 The Shiny
The rulebook is unusual in that it is spiral bound, notebook style. This is invaluable when gaming as it totally avoids damage to the book spine (like the sort that wrecked my AE:WWII book). The front even has a hinged plastic cover which would deflect Coke spills.  An easy to read rulebook, designed for gamers, by a gamer. Definitely a labour of love. In fact my only criticism is that the full-color rulebook is reasonable at $30 but the $18 postage pushed it into the boutique range, where the 80 page notebook would compare unfavourably to glossy productions like Anima Tactics or Infinity.  In fact I put off buying the rules for 6 months for that due to the cost. A cheap pdf option would be good. (I notice some of the OOP expansions now have this pdf option.)

The Game
After a somewhat self-indulgent introduction,  the game quickly gets into the nitty gritty.

Models are lumped into categories such as undead, demon, human, beast etc. Most characters have 2-3 skills.  There are about 40 skills to choose from and I found them quite manageable, unlike games like Malifaux and Warmachine where "skill creep" means he who remembers the most special rules wins.

Mechanics
Players take turns alternately moving a single figure. Each figure gets 2 actions per activation.
Actions can include the usual moving, charging, shooting etc as well as "changing state".

Changing state is recovering from shock effects caused by injury or terror.  Models are placed "face down" - unconscious or catatonic; or "face up" - stunned or stupefied with -1 modifiers. It costs 1 action to recover 1 level.  Finally a ruleset which simply tips models over to denote their status rather than using a plethora of special markers or cards!  How... ...simple and sensible.  It'll never catch on.

Models in close combat roll their number of attack dice and add modifiers for their weapon type.  The highest d6 rolled (including any bonuses)  is the winner. Movement is likewise simple and straightforward. Shooting means weapon dice are compared to the firer's dexterity - if the rolls are equal or above the dexterity stat the shots hit. W40k "cover saves" (4+, 5+ and 6+ rolls on a d6) are used to negate hits on targets in cover.

Damage is assessed by rolling a d6 each hit and adding the highest to the weapon strength. If the total exceeds the target constitution a wound is inflicted.

Players take morale tests if friendlies within 5" die; if confronted with a terrifying foe, or it needs to cast a spell. A failure can result in catatonia, stupefaction, revulsion or frenzy.

Wounds can stun a model, render them unconscious or inflict minor or severe injury.  There is a Mordhiem-esque after-game roll to check injuries which can result in a drop in player attributes such as -1 movement for a leg wound.

As usual, I tend to like a "reactive fire" mechanic but Strange Aeons does not miss it as much as many games.

The basic rules include 21 pages and are, indeed, pretty basic.  Whilst far from "cutting edge" they are simple and straightforward, with no niggling flaws.  The "advanced rules" - jumping, destroying objects, critical hits - are so simple as to be regarded as standard rules in most rulesets.  Definitely a ruleset that "makes sense." 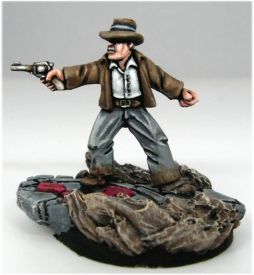 There are some great pulp minis out there. This one is from Artizan Designs.

The Crunchie Stuff
The remaining 60 or so pages are devoted to Threshold (good guy) and Lurker (bad guy) lists.
There are baseline character and normal Threshold agents, and 8 special characters such as kung fu experts, medics, snipers, demolitionists etc.  Your list of agents can be recorded simply and easily in a log which you can photocopy.

The Lurkers include cultists, priests and cleaver-wielding maniacs in addition to ghouls. Cthulhu fishmen, demon hounds, nightgaunts, werewolves and undead such as zombies and mummies, demons. There are 21 different monsters and evil humans to fight.

The list is reasonable but not terribly comprehensive and does not have the ability to "create your own" monsters.  This tends to restrict Strange Aeons a bit. For example, though there are plenty of Cthulhu beasts, there is no provision for vampires - a horror staple.It is definitely more Mythos than straight horror.

There are 10 normal and 6 evil spells.  Spells are one-use only.  A failed spell usually results in a test on the insanity table.  There are also 6 magical artifacts which have various effects.

Overall, the lists and bestiary is a bit more limiting than I would like.

Campaign
The post-game sequence includes rolling for injuries, and winning Threshold agents can gain a skill at the cost of 1 Base Point.  Each surviving model may also roll a d6 - a '6' means they have found a Map Piece. Lost agents can be replaced with new ones.  However agents can never be retired - players are stuck with them until they die.

There are 6 scenarios which can be rolled randomly, and 6 quest scenarios that ca be activated by spending map pieces.  There are good gameplay examples following this, which reinforces my belief the rules author is a gamer himself.   Lurkers can spend BP on "plot points" which change the scenario and give them advantages (like re-rolls, and various bonuses to demons, undead and cultists).

Finally there are photocopyable sheets for player "warband" logs and a quick reference sheet.

Overall, the campaign is sensible and easy to manage.

Indirectly Competitive
Well not exactly co-operative, but player warbands do not play directly against each other.  Instead each player takes turns to operate the enemy "Lurkers".  Not only does this eliminate any bad feeling about "powergaming" (in games like Mordhiem, some skilled-up characters with certain gear were well-nigh unbeatable making some campaign battles mercilessly one sided); but since the points value of the Threshold warband is always matched by the Lurker player, games are always reasonably balanced. I go into more detail here. 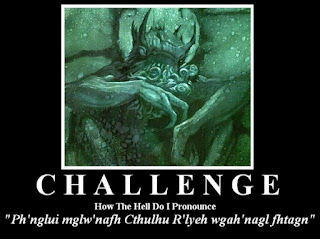 If you can pronounce it, then you probably should be buying Strange Aeons, which has a strong Cthulhu vibe


TL:DR
The rulebook is well designed but pricey for what you get; the basic mechanics are pretty simple and old school but don't have any major flaws.   The game has a reasonable but not super-comprehensive monster list; something addressed by numerous expansions.  Personally, I'd rather have a points-builder to stat out my own monsters.  As it stands the game is a little more narrowly focussed than some other competitors such as the Savage Worlds series.  Playing only 1920s Cthulhu-flavoured Threshold vs Lurkers will may get old for some after repeated playing.  The idea of "indirect competition" where player warbands never fight directly keeps this game friendly and eliminates "balance" concerns prevalent in competitive campaign games like Mordhiem. There are enough scenarios and gear to keep you going for a while and there are expansion books being steadily churned out. The rules are simple but good and would be very amenable to house rules.

Recommended?  If you like Cthulhu horror you probably have this game already; if you do, and don't have Strange Aeons, then you should race out and buy it. However if you're a fence-sitter then I'd recommend a cheap $10 Savage Worlds RPG book (hard copy or pdf) which is great value and allows a range of pulp skirmish options to be played. (If Strange Aeons was a cheap $10 pdf like Chaos in Carpathia/Cairo I would wholeheartedly recommend it, but $48 is a bit much to test-try a 80 page spiral bound rulebook which is rather specifically focussed)  If you "get into" it then you can expand into the more specific Strange Aeons series down the track, and meanwhile you can spend the $38 you saved to buy some minis from Artizan, Pulp Figures, Copplestone, or similar and get playing.


Note: Anatoli's Game Room has a lot of Strange Aeons AARs - well worth checking out.
Posted by evilleMonkeigh at 04:56