While I await my Empire of the Dead rulebook I was reminded of another ruleset I recently acquired - Chaos in Carpathia.

I like to be able to re-use figures, so my Empire of the Dead horror minis and Artizan Thrilling Tales pulp/horror figures serve a triple role in EoTD, CiC and Strange Aeons.

The Malifaux terraclips terrain (and indeed some of their miniatures) serve a dual purpose as well. The sewer and city boards are particularly useful for Victorian horror.

Anyway, on to the review:


The Shiny
As usual I don't drool over pdfs.  It is 88 pages so in the middle-to-long end of pdf printouts, but only 21 of those are rules and the rest are campaign related.  I had no trouble reading through it as the rules were pretty straightforward. The art was OK (mostly B&W drawings with colour covers) but unexceptional.

The Game
This is a campaign-based system, a trait it shares with EotD and Strange Aeons. Many of us were introduced to this sort of gameplay through Necromunda and Mordhiem. The storytelling feel as characters rank up, get injured and develop traits (sometimes good, sometimes bad) sets these games ahead of one-off games like Malifaux.

The mechanics involves rolling d6 and counting 4+s as "successes" - a trait it shares with games like Ambush Alley and  Savage Worlds RPGs. However a '6' counts as 2 successes. A lot like the damage system on Full Thrust actually. Re-rolls may be allowed due to special rules and equipment.

Each "success" is a "goal".  Simple tasks might require only one goal i.e. a hero with 3 strength might get 3 dice, needing only one roll of 4 or more to perform the task...

Stats & Attributes
Warrior stats are rated in Strength (includes toughness and power), Agility (includes melee skill and accuracy), Mind, and Resolve (willpower/magic resistence). DR (damage resistence) is a number added to strength to determine overall toughness.  Resolve also allows a number of "Fate" dice which are a limited resource that can be added to die rolls through the game (rather like "Might" and "Will" dice from GW's LOTR). Heroic characters also have Vitality (which is the amount of wounds they can take - usually 3).

Initiative
This can either be done by:

Random card: dealing each hero or henchman group a card, then moving in card order. This is more unpredictable.

Alternative activation: leaders on each side can roll dice equal to their Mind attribute, the leader who scores the most "goals" chooses who goes first, then the sides taking turns to move a hero or unit thereafter.

Units and heroes can perform one move action, then one special or combat action each turn. Units can perform as many actions designated as "Free Actions" as equals their Mind attribute.
Free actions include spotting enemies or dropping prone. Special actions include climbing,or crawling, jumping, hiding or picking up/interacting with items.

Units can "hold" their actions and try to interrupt the actions of an enemy.  They must make an opposed Agility roll to see who takes action first.

Combat
Both sides roll dice equal to their agility. The one with the most goals wins; excess goals can be used to add +1 to damage.

If the attacker gets more goals, the difference in the scores equals the amount of wounds inflicted.

Ganging up on a single model offers significant advantages. Cinematic moves like disarming, tripping and aimed shots are catered for.  Missile attacks work in a similar fashion to melee - longer range shots and cover add extra dice to the target's agility in defence. An optional rule makes it possible for weapons to jam.

Models which have 0 wounds must take a "Knockout" test to remain standing. Models who fail are "knocked out" -  it is out of the game unless healed and can be automatically killed by enemies in base contact.

Henchmen tend to operate in groups of 5-20 and have a single wound. They can also be "pinned" if they take casualties from long range fire.

The base rules are only 21 pages - simples!  and the remainder are devoted to warband and campaign rules. 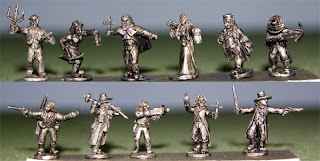 Campaigns &Warbands
There are warbands for monster hunters, vampires and minions, werwolf packs and treasure hunters, as well as special personalities like canine companions, mentalists and western gunfighters.  You could instantly assign Empire of the Dead minis to a warband with no modification. All models come with a points value for balancing warbands. However there isn't any character building abilities which is a bit disappointing.

Campaigns include a random scenario generator with 6 scenarios; with objectives and rewards, and special rules.   I.e. "terror in village"  "vampire's castle"  "crypt"  "battle in wilderness" are some examples which are reasonably generic.

Post-battle rolls are made for knocked out models - which could result in capture, injury or simply be a scrape with no long-term effects.

Rewards (gained from surviving battle, accomplishing objectives and defeating enemy models) can result in advances to stats or a gain in traits. Werewolves and vampires have their own tables for post battle injuries and rewards. If the warband had underdog status it gains extra XP.

Minis
Blue Moon have downloadable scenarios for the "Chaos" series which includes the Chaos in Cairo rules. They have lots of 28mm pulp figures that are meant to work with this range.

Many of the Artizan Thrilling Tales models, Copplestone and Pulp Figure minis would also work well.

I am using the similar Chaos in Cairo rules (when I can find them on my hard drive) to make a Mummy game in 15mm.  They have rules for archeologists, cultists, mummies and Sons of Ra and are fully compatible with the Chaos in Carpathia rules and critters. As you can see I am quite taken by the Blue Moon 15s which are very affordable and nicely detailed... 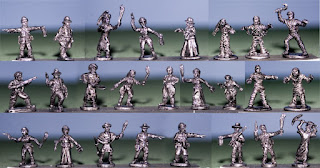 All you need for a Mummy game: $15 Blue Moon Minis  $11 Chaos in Cairo pdf
TL:DR
For $11 you can have a easy-to-learn game that utilizes figures common to several other games such as Empire of the Dead.  It has a solid campaign/advancement system, and cinematic combat. The "goal" system gives it a RPG-lite aspect.  The "fate" dice add an aspect of resource management to your heroes.  The ability to "hold" actions and the card/alternate activation are good features.  I would have preferred a character creator which would allow these rules to have a wider scope but for generic Victorian horror they contain all you need anyway. The sci fi skirmish "Blasters and Bulkheads" and the noir investigation game "The Department", and fantasy and superhero games all use similar mechanics so if you like the system you can branch out without learning too much new stuff.
Recommended