I've finally made some progress with my tank campaign game - sort of "Necromunda/Mordheim-meets-World of Tanks."   While we have a zillion platoon+ WW2 games (a la FoW/Bolt Action)  I'm interested in focussing on individual tanks; giving their commanders and crew a progression system and making the movement system/orders feel like using actual tanks rather than acting just like a large fantasy monster; but keeping it smooth enough to handle 12 tanks at a time without getting bogged down in counting every ammunition round.

Keen to avoid reinventing the wheel, I first looked through Flames of War for ideas (yes I understand there is a newer edition which probably poops rainbows) and man, the rules are dense.  Given it is a 40K-adapted-for-WW2 ripoff, it is surprisingly unintuitive and "dense"; with 101 ways to resolve mechanics and a hundred special rules and rules exceptions.  Very "British homebrew rules" in it's design.

Currently I am going to borrow ideas from Fistful of ToWs (perhaps adapted for d10) as it is a lot smoother and will be able to handle the ~12 tanks per side a lot quicker, leaving more room for emphasis on campaign-orientated stuff.  Also, FFTW has an awesome vehicle database with pretty much every tank from 1917-2017.

Anyway, I was going to share a bit about some of the models.  I'm initially avoiding the late war King Tiger-Panther-German weeaboo stuff in favour of quirkier mid-war tanks. 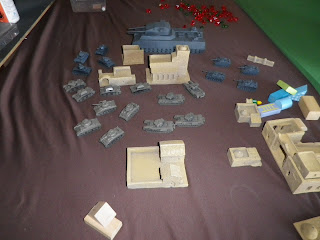 If you're wondering why my blog posting is so sparse - the answer is in this photo...
You can see my daughter "helped" me set up as the tanks "needed some gems" to fight over (hmmm, maybe a campaign idea) and she added her own wooden block buildings.

P.100 Landcruizer Ratte (Takom)
This was an awesome piece of kit by Takom, inspired by the Delta Vector google group's "landships" thread.  It was easy to put together, apart from the fiddly AA guns on the rear hull (gun barrels broke off and glue was spilt) and the tracks which were a little unintuitive to put together (I procrastinated a week before forcing myself to do the tracks).  Given it came with two Maus tanks it was reasonable value at ~$60AUD. The only disappointment is it was 1:144 which means it is SMALL compared to the tanks(!) and out of scale. Luckily it's so huge it means it merely looks big instead of freaking humungous. 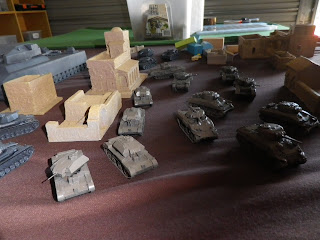 Zvezda Cruiser III
Oh, I love snap-together kits.  After the incident with the Robotech models which had me quit modelling for several months in a monumental rage, most readers will know I am not a fan of multi-part models, or "unecessary modelling."  You know, when a mini is cast in 8 pieces when it is perfectly capable of being cast in a single piece?  I don't get any more "satisfaction" taking 30 minutes to assemble/prep a model that should take 1 minute.  But what about scratch builders and creative folk?  Pffft. 99% of modellers assemble their models the way shown on the box, and most multi part models are designed to only go together a very specific way anyway.   Also, if I'm in the 1% and in the mood to be creative, I'm happy to slice and dice models up anyway.  If a model is made for wargaming, it should be easy to get on the table. There's plenty of Tamiya/Revell kits for those who want to stuff around for hours gluing stuff together.

Anywhooo - it took about 3-4 minutes per model and they hold together tightly and neatly without glue.  A massive thumbs up.  That said, they are a little weedy - the Zvezda 1:100 is not an exact match for the Plastic Soldier Company's own 15mm lines.

Again, these were gloriously easy to put together - and didn't need any glue (though I may add some later for peace of mind)

Interestingly, Battlefront is becoming increasingly like Games Workshop; not content to copy their rules and codexes and overpricing their models, they now are trying on the anti-competitive business practices (i.e. selling only through certain suppliers/restricting overseas access) so I'm keen to avoid their products where possible. 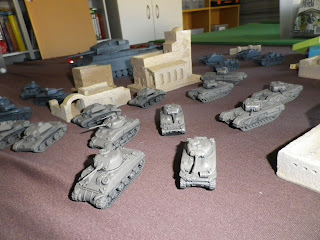 The Shermans were a mix of resin and plastic. The plastic models were better cast. The PSC ones were identical in quality than the FoW ones which cost 3x more.

PSC Churchill
These were a big turn-off compared to the previous two models, and took ~25 minutes each - I could assemble a platoon of 5 Zvezda models faster.  There was a LOT of unecessary modelling - such a turret hatches, exhausts etc which should have been cast on in a single piece.    The AVRE square turret was a nightmare with 7 pieces that needed to be joined simultaneously which would be fine if I had octopus appendages.  If I had to do all of them as the AVRE turret I would probably commit suicide with a claw hammer.

While the assembly job was painful, I did like the fact it came with the cast (rounded) turret and the earlier square one, as well as 6pdr/75mm gun options to allow pretty much any Churchill version to be made.   At $29AUD for 5 compared to $55 from Battlefront, the price was also competitive.

The plastic casting was good and everything fitted together well.  However, they were the worst to assemble.

Battlefront (FoW) Stug
These came with both StuH and StuG upper chassis and I was rather impressed with them.  They assembled rather easily and came with lots of options.  I got mine in the big Normandy starter box which means they cost under $10ea (even less if you deduct the cost of infantry) but they would cost a steep $15ea if bought individually which would shift them from "recommended" to "no freaking way."

This was probably the best mix of easy-of-assembly and customization options (lots of baggage/tracks/wheels + gun/hull types).   The best thing was if I do not glue the top hull down, I can swap out the gun/top hull and have them in either early or late war configuration (or with the assault gun).

I also had two resin StuGs from the original FoW starter box (you know,  the one with 3 Shermans + 2 StuGs) which I prettied up with the extra bits from the plastic kit.

Battlefront (FoW) Sherman/Firefly
I assembled four of each.  I had three solid-cast resin ones from the original Battlefront which were a bit uninspiring (poor resin casting, droopy guns) and again, the cost was well under $10ea due to coming in a box; whereas it would be $15 if sold individually.

Again, it had two hulls+turrets (Sherman V and Firefly) but annoyingly, unlike the StuG you couldn't swap them out as there was only one gun mantlet - once you assemble the model you are stuck with it.

I've got an unassembled PSC Sherman for $5 to complete a platoon, but it is in a ridiculous amount of pieces (multi-part tracks are a no-no).  That said, at 1/3rd of the price, it's hard to justify what Battlefront are asking - I'd rather grudgingly take longer on assembly.

TL:DR
Zvezda are very cheap (~$5ea) and super fast to assemble (a few minutes each) and can be snapped together without glue.  Downside: they seem a bit weedy (I'm going to get some PSC PzIVHs to compare to my IVDs so more on this later). Also, no customization options (track links etc). Nonetheless, well recommended.  So freaking easy!

PSC are also cheap ($6ea) and come with more customization options. Downside: They were the worst to assemble (25min each+) with lots of uneccessary bits and some unpleasant tasks (AVRE turret). Recommended - if you are bit more patient.

Battlefront/FoW are easier to assemble than PSC (15mins) and also come with good customization options.   Downside: ridiculously overpriced ($15ea) - 3x more expensive than the PSC which has identical build quality. I did like the StuGs.... but  not recommended unless you have more money than brains.  And like supporting douchebag business practices.
Posted by evilleMonkeigh at 15:45 6 comments: