My 1000-page journey with my daughter through the LoTR books is at an end, and likewise my LOTR painting run is drawing to a close.

This month my work ramped up again, and I only managed to paint these 31 models, giving me a total of 289 painted in two months of 2022 - mostly due to being flooded in. It's currently another huge flood where I live, and Day #5 stranded, without coffee. Yep let that sink in.

I've now done the bulk of my Middle Earth forces. Now it's just 'tidying up' random models. My aim was to have 50-60+ strong warbands for each main LoTR faction and this has been largely achieved.

The army of the dead were most interesting to paint.  I painted them roughly in brown base colours, then went over the top in grey then white drybrushes, with the odd wash in between. 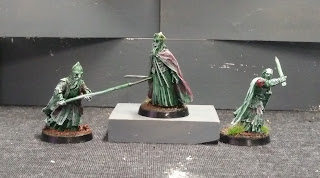 You can see the leather and armour peaking through, which I based on this picture. They aren't pure greeny-white which is the most common paint style. I found the success confidence boosting and I may attempt some glow and fire effects based on what I learned. I was surprised how fast and easy it was. 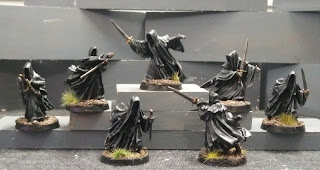 I only have 7 ringwraiths - remember I ordered random job lots from eBay - which I painted rather boldly rather than drybushing to make them 'pop' more from a distance. Two had broken weapons and were customised out of my bitz box.

The Easterlings with their pleasingly uniform paint scheme was another 'low hanging fruit' to chalk up a few more minis before the month ended. They could probably do with more highlighting but I'm on a schedule.

The only  'must do' LoTR remaining is some 12-16 Rohirrim on horseback and some 5-6 random heroes; the rest is just me trying to trim down spare plastics - i.e. I have only painted 40 or so Mordor orcs I needed, but there is still 100 or so of them in a box, staring accusingly at me.

Now it's all ready to play - naaah - time to switch to a new project! Imperialis Aeronautica is looking increasingly good - I just found a random Thunderbolt model in one of my 'bulk buy' LoTR boxes and I really like it. It must be a sign!

But.... ....my daughter and I are now reading Mortal Engines. Perhaps its time for some mega tanks and humongous landships....

Posted by evilleMonkeigh at 01:36 8 comments: