I kept the weapons, units and gear very vanilla so I could get a feel for the mechanisms. No special weapons, no magic or hacking, no extra rules for demons or AI.

Disclaimer: Photography is in a poorly lit shed on my phone, and I promised the wife I'd be 30mins max. So let's see what we can do in this time. 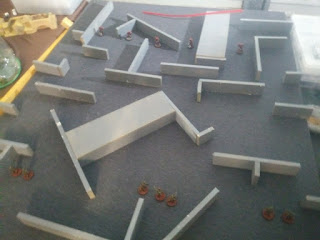 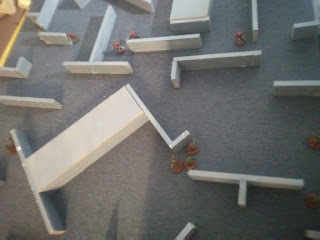 Marines (with 7 + leader) unsurprisingly win the initiative dice off. Both sides move up, staying in cover. 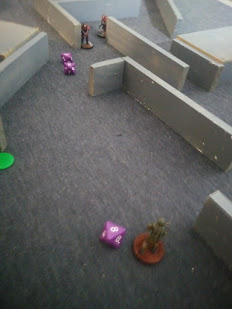 A Marine sprints across a gap, wins reaction roll and gets past before Enforcers can fire. 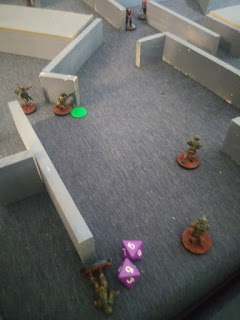 A second Marine peeks but is shot down by the Enforcer's SAW gunner. Oops - forgot should have been using d10s to damage; also he should have been only "downed" - not dead. Probably works out fair. His allies in LoS who see him shot all pass their morale checks. Now I should have swapped initiative to the Enforcers here but I forgot. Btw, I shift from using green to blue as my Hold token, as I realise I have not enough greens in my shed box. 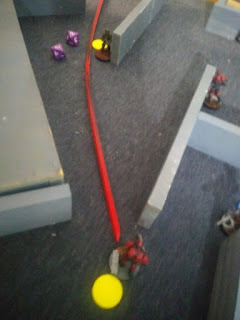 Both fail their reaction roll and are "Stressed" - this basically means they can only react to actions directly targeted at them; i.e. instinctive reactions like dodge a shot or fight back in CQC, but they can't snipe someone across the board.  I'll remove the Stress in a 'clean up' phase at the end of the turn. 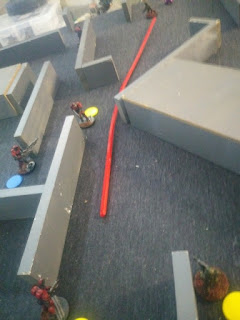 The Enforcer tries to peek a Marine in the distance; but the Marine wins the reaction roll and the Enforcer is stressed. Luckily the Marine's shots bounce off his Enforcer armour and he passes his morale check to avoid being shaken. 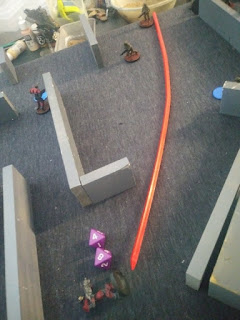 The Marines in the open on the flank are a tempting target; the Enforcer tries to peek but loses the reaction roll and is gunned down, dead, by well aimed shots. At this point initiative should have shifted again - but I forgot. 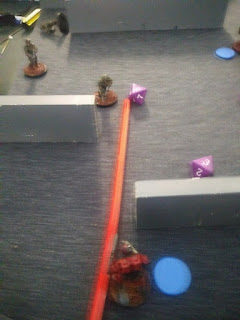 The Enforcers continue their futile attempt to clear the Marines on their left flank; this Enforcer fires first but misses his shots. 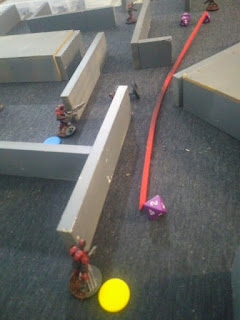 This Enforcer attempts another crossfield shot and again fails his reaction roll and is stressed. Again I forget to change the side with the initiative. 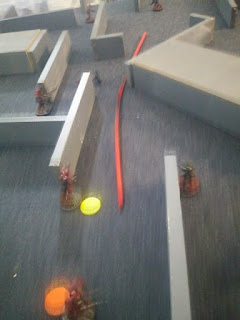 An Enforcer tries to rush into CQC but a long distance shot hits him. Although his armour deflects it he fails a morale test and is shaken (orange token) and cannot complete his move into contact, remaining stranded in the open.

Now a bit of tactics; one Marine goes on hold to cover his ally who then moves into LoS; now he can join the reaction roll in a 2v1. This was cool. Both sides get 8s but the active player wins ties. 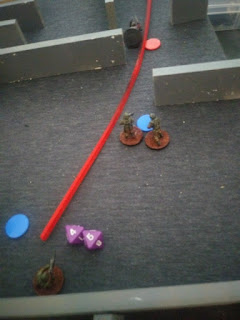 Hit by two shots, the Enforcer is "downed" - writhing around on the ground. The Marine leader then tries to finish him off but narrowly misses both shots which spray chunks out of the concrete next to him. 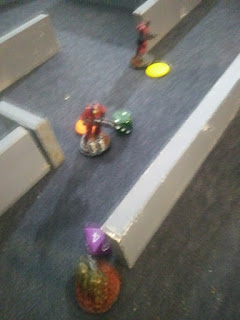 On the other flank, a Marine pops out to confront the Enforcer previously "Shaken" by a long distance shot. The shaken Enforcer is downgraded to d6 and unsurprisingly loses. The other Enforcer was facing away and cannot join in. I prefer 180 vision arcs in games where possible - as it adds a lot to positioning/tactics without a lot of complexity. 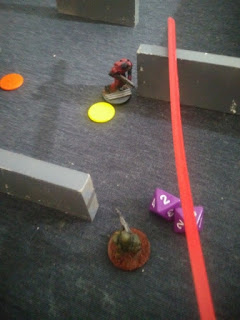 His partner pops around the other side of the cover to shoot the other Marine who is stressed. He wins the roll but misses hideously from point blank. At this point I stopped as I promised I'd only spend 30min in the shed.

Observations: Game works out of the box, as expected as the 'beat 4+ with a dice' is pretty common. Quite a bit of action going on.

I forgot to swap the initiative back and forth a few times (when the active side failed a reaction roll with a 3 or less; and when the active player took more casualties in their action), so it was less dynamic and a bit more IGOUGO than it ought - although the reactions provided plenty of action for the non-active player.

Reacting models do get to use their full RoF, but a failed reaction roll means they are stressed - they miss their turn if they haven't acted already, and cannot react further except at actions targeted at them - which limited the reactions a little. I also forgot to use Suppression fire. Reacting models also all passed their Ammo rolls this game which is probably pretty unlikely, mathematically. Had a vaguely Infinity vibe as models often paused and went on Hold to cover an area. There was quite a lot of care in positioning and facing which was good. Cover mattered as intended. I liked how you could Hold with a model and use it to cover an ally. I may expand this into a Hold+Move simultaneous action.

The jump from 4 Defence to 6 Defence was vast; enabling the Enforcers to shrug off quite a few shots. The variety of dice (d6, d8 d10) made it harder to make modifiers consistent but did make it easy to calculate (just grab the dice and throw).  I liked how when a model was downed you had to decide - should I finish him off? - potentially wasting your shots on a model that might die anyway.

I didn't play with stealth or darkness rules (which will be integral to the setting) which would really impact the long-range crossfield shots which happened quite frequently. No gunfight included more than 2 models on each side, despite how I had rules to allow bigger shootouts. The plentiful cover kept the action spread out into chunks and stopped it becoming a shoot-fest, enabling some small 2v1 gang ups and flanking. There was quite a lot of thought put into precisely placing minis out of LoS/angled so they only had to face minimal opponents when they acted.

A lot more to do, but the game works as is, which is nice. I kinda enjoy using my weird dice so I'll stick with them instead of my original d10+stat system.

Posted by evilleMonkeigh at 04:55 8 comments:

So these minis are not finished (missing detail, bases need work, etc), but I'd regard them as 'table-ready' to start playtesting my homebrew sci fi horror rules. Basically the core  game will be "Necromunda" level squad skirmish, but with heavy emphasis om morale/stress, darkness/lighting/stealth, plus weapons that jam or run out of ammo at inopportune times. 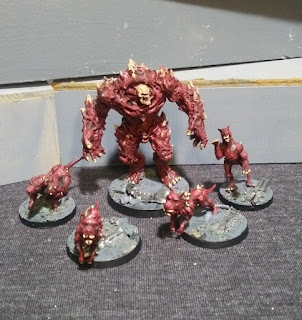 The premise: the Rapture spoken of in the Book of Revelation has come. The holy have ascended to heaven, and the earth has been destroyed in fire. However, Revelation didn’t mention the unbelievers who were in space stations, asteroids, or terraforming colonies….

Twenty years on, darkness and horror stalks the remnants of humanity – who call themselves the “Forgotten”. The Forgotten form factions, warring for valuable resources, usually under the patronage of powerful demons who compete for resources, followers and prestige. The small populations of these colonies and bases do not support large armies. Instead, small special ops teams are aided by their demonic patrons in desperate strike missions and boarding actions. Something along the lines of Doom meets Event Horizon. Chaos Cultists wearing Mass Effect special forces tech. But they are not alone – scientists who try to fight back have created a virus to mutate human DNA so they are impossible to become hosts and thus "immunize" themselves against possession and free themselves from the frailty of human flesh. In the design process, they have created horrific monsters and mindless mutants, and have uploaded their consciousness into computer chips embedded in hybrid life forms. Meanwhile, many station and spaceship AI, unable to deal with the paranormal events, have gone rogue, creating drone and cyborg forces to enforce their own obscure (and sometimes crazed) agendas. 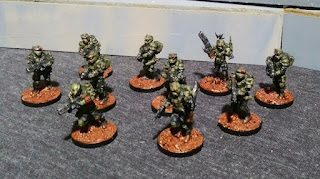 Rogue AI (If Skynet had the personality and pettiness of Glados) "Great power, weird agendas"

While I'm still working out how my AI forces will work, Mantic has been supplying my needs thanks to their surprisingly cheap and pleasant Deadzone/Warpath sculpts. 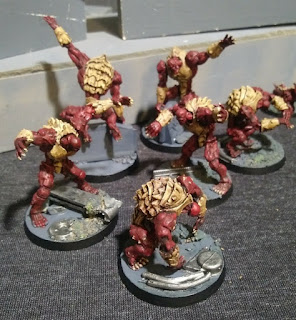 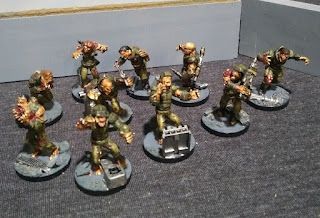 You get a lot on a Deadzone starter box; I still have ~10 unpainted minis from this set. These Plague will serve as the "scientists who mutated themselves" faction. 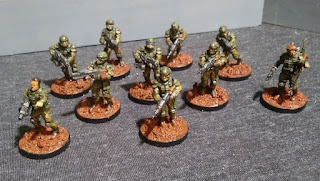 I was most impressed by the GCPS "Imperial Guard" - they come with a huge pile of spare bits and a wide range of weapons and poses. Probably one of the best value 28mm boxes I own.  In this 20-man unit box, there's enough leftover bits for ~12 or so more models if you had more torsos. 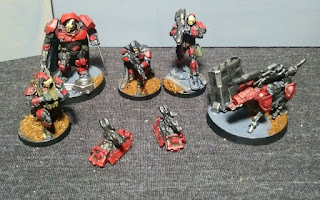 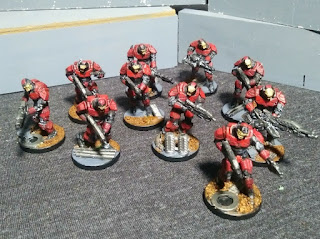 The "Peacekeepers" wouldn't have been painted red if I realised I was also going to buy the fleshy-red Plague; I regret not painting them purple instead (a good cult-y colour); also ffs my GW black wash failed and left chalky white deposits where there was supposed to be dark recesses.

There's quite a lot of toys in each starter and at $40AUD (around ~$30USD) I think they were well priced to sucker me back into my first 28mm purchases in years.

I've been working away at some sci fi horror rules for a while, which use d10+stat and have both opposed and static rolls. But digging through my old HDD (the one I resurrected this year) I found a rather interesting set of house rules I already made. It seems to be an amalgam of Tomorrow's War's initiative and reactions and Savage World's pulp magic powers. Both actually share the same dice system; each stat is assigned a d6(poor) d8 (average), d10 (great) or d12 (heroic) which has to beat a 4+ (and the opponent, if it is an opposed roll) so they kinda fit neatly together.

So instead of using the sci fi horror system I've purpose-built for ages... ...I'll probably adapt this instead as it has caught my fancy. What can I say *shrugs* - I have a limited attention span....

Reading these I was inspired to dig out Infinity and Tomorrow's War - to revisit the "reaction" genre I've moved away from (I feel they bog games down to much; an alternate move system allows similar "reactability" at a fraction of the overhead). I want to discuss them in a game design post... but report cards are looming large in my near future...

Posted by evilleMonkeigh at 02:55 4 comments: