World of Tanks: Getting Started

I've been playing this a lot lately. I've reviewed this game before - a mix of tanks from WW2 nations duke it out until one side is all dead.  It's a great "Dad" game - slow paced enough to favour cunning over twitchy reactions - and with 10-minute rounds allowing you to be interrupted by offspring and wife if needed.  I know a lot of dads/sons/cousins/uncles that play this together as it is very simple and family friendly but has a high skill ceiling.  It's also free.

Since I've already reviewed this elsewhere, I'm going to focus on how to do well and enjoy yourself.  First of all, you need a decent tank.....

This game is an easy sell to your mates if you want to play co-operatively. Tanks are cool.


Tiers.
Tanks come in "tiers" - they only battle similar tier (rank) tanks to prevent mismatches. You must play "x" amount of games in a tank to unlock a tank of the next tier up - e.g. the M3 Lee (Tier 4) leads to the Sherman (Tier 5) and hence to the Sherman Jumbo (Tier 6).  The best Tiers for the average player are 5-7, and Tiers 3-4 are quite painful.   Remember: a tank that is powerful in real life might be only average for its tier - i.e. many players covet a famous Tiger but are disappointed, as they are pitted against late-war Soviet IS heavies and Pershings rather than the T-34s and Shermans they historically dominated.

Here's a few fun (read: effective) tanks for their tier. I'm going to focus on Tier 4-6 as lower tiers are easy to play with almost any tank, and playing higher tiers 7+ suggest you already have spent a lot of time in the game anyway and won't need any advice from me.

Tier 1-3:
Generally you progress through these tiers quickly.  I'd advise you to move on. Most guns will easily outmatch armour so you won't learn how to use your armour properly - and players are so dodgy you can't tell if it was you or your team mates that got you killed, so it's harder to learn at this level.   I enjoyed using the MS-1, T18, Cruiser III/IV, Pz.II and Cunningham. The Pz.1c is a little speed machine.

Tier 4:
You usually get dragged into Tier 5 games so this is a tier to skip through fast.  The tank destroyers are usually good - the SU85B is great, the T40 is capable and the Hetzer is fun for "derping" (one-shotting opponents with a howitzer). The Stuart light tank is good for scouting and the Luchs with it 30mm autocannon is lethal and fun.  The T-28 is underrated with a deadly rapid fire 57mm.

Tier 5:
This is the first decent "normal" tier. The Russian heavies (KV-1, KV-1s) dominate, although both the Churchill and T1 Heavy are capable.  For mediums, the Sherman is more versatile than the Pz. IVH, but I think T-34 modified with the 57mm ZiS is most effective. The Crusader is similar to the T-34 and has great camouflage. The tank destroyers are all fun - I favour the Stug with its reliable 75mm but the fast American prototype T-67 is generally acknowledged to be the best.  The Su-85 has a powerful cannon.  The British AT2 TD is painfully slow but is entertainingly invulnerable against average-to-poor players. Out of the scout tanks, the Chaffee is a great all-rounder but the AMX-ELC is the most fun - a 90mm cannon on a fast, agile, low-profile scout? Yes please.

Tier 6:
My favourite tier as it has good medium tanks - which in my opinion are the most flexible and give you the most freedom in the game.  The Cromwell is fast, deadly and a great flanker - the German VK.3001D prototype trades speed for a better gun.  The T-34/85 is a great all-rounder. The heavies of choice are the Russian T-150, KV-85 and American M6.  The ponderous KV-2 has an enormous cannon than can amusingly 1-shot many tanks. Of the tank destroyers, the Jackson is perhaps more reliable than the faster, more famous Hellcat, but I prefer the SU-100's more powerful cannon over either.  The T37 is a good light with a reliable gun.   I haven't mentioned artillery as they have a similar bland playstyle, however the very mobile FV304 is an exception.

Tier 7+
By now you know what you enjoy in a tank anyway. It annoys me when people recommend Tier 10 tanks (which take 1000s of games to attain) to new players. Players will either like or dislike the game well before then. It's like recommending to someone to get a job at McDonalds over KFC as a casual checkout operator, because McDonalds national manager position has a better dental package.


Tank "Lines"
You unlock tanks in a linear fashion. Sometimes you need to play a "lemon" (poor tank) for dozens of games to unlock a good tank. I'm going to focus on lines that are fun to play right from the start, with few "lemons" through to tier 7.  Again, I'm ignoring tier 8+ as they require 100s of games to unlock.

American Tank Destroyers.  These are good all the way though tier 6 (Hellcat, Jackson).  Unlike other nations most of the TDs have a turret making them more flexible. There's no 'bad' tanks to grind through in this line, and you should enjoy them all.

Russian Tank Destroyers.  Another decent line with few weak tanks and a few very good ones.

British Mediums. The cruiser tanks are fast and have good firepower.  Again, there are no bad tanks in this line - all are decent, some are excellent (Cromwell).

Russian Heavies.  It's obvious this game was made in Russia. Heavies are usually the best tanks, and the KV and IS series are the best heavies.  These are the most idiot-proof tanks in the game.

American Lights.  These give you a lot of options and are useful in most situations. I'd recommend the Chaffee-T37-Bulldog line.


Choose Your Nation
Many tanks share engines and guns so if you unlock one gun, you unlock the others.  So sticking with a particular nation will unlock tanks faster.  Russian tanks are generally regarded as "easymode" with idiot-proof heavies, and solid mediums and tank destroyers.  American tanks, once you get past the troublesome M3 Lee, have solid mediums and heavies, and excellent lights and TDs.  These are the recommended nations.  Germans have some decent tanks, but are generally outclassed at their tier* (*It's almost like the developer was Russian...)  British tanks are too niche, and Chinese tanks are usually inferior Russian copies. Least recommended: French and Japanese tanks have too many awful lemons to grind past.

Choose Your Role
I rate these in order of most to least recommended for a new player.
Heavies are the easiest to use and gain XP in, and the most forgiving of mistakes. Once you master sidescraping, hulldown and angling your tank's armour, you will be hard to beat. The Russian KV-1 series are the best heavies overall.  American heavies are the hulldown masters.

Tank Destroyers also have a simple gameplay style and allow you to "camp" and snipe from bushes behind the front line.  Once spotted though, they are easily destroyed, and they are more "static" and influence the game less than heavies.  You need to understand how camouflage works in the game to use a TD effectively.

Mediums are the best all-rounders.  Their mobility allows them to flank effectively and contribute all over the map. Using mediums will improve your map awareness and overall sense of "tactics."  My favourite class, but not as straightforward as the first two classes.

Lights are stealthy, flimsy and fast. Difficult to play well, they are best left to patient or experienced players.  You need to have the stealth and stalking skills of a TD, and the map awareness of a medium - but you have no margin for error.

Artillery don't play as a tank per se - they sit still and bombard enemies from a top-down view from across the map. It's worth having one so you understand how they work, but generally any other tank is far preferable for your team.

Phew, that's a fair sized wall of text.  Hopefully you have an idea of what nation, class or tank line might suit you/are easier to use, avoiding some frustration.  I may do another article on basic tactics....

Note: World of Tanks is also a rather decent smartphone game and is also available on (shudder) Mac.
Posted by evilleMonkeigh at 07:34 7 comments:

Was browsing K-Mart (Wal-Mart to Americans?) and came across this $15 bucket of cheap plastic dinos. Since my 2-year-old is fascinated with dinos, and I have some in mind for a Jurassic World style game, I grabbed them.... not realising how much terrain is inside.

I've used fishtank-style plastic plants before, but never have come across them so cheaply and in such quantity. 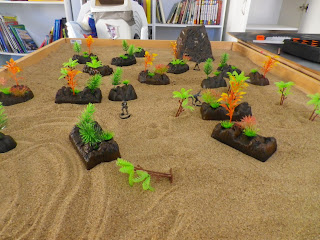 Obviously they would look better on a jungle themed board.  You could certainly tart the bases up a lot more if you felt inclined (which I don't).

You see, the reason I must use a sand table is because my co-inhabitor of the "man cave" insists on being exactly like daddy... 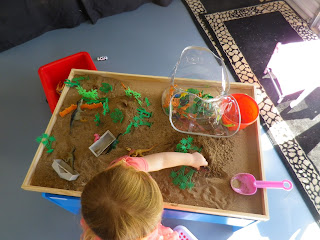 Little Miss was deeply impressed with daddy's sand table and was delighted to have her own - "thank you thank you thank you" - it also keeps her quiet for hours (and less likely to "help" me) when I'm in the shed.

Disturbingly, she now refers the gaming room as "her" shed as opposed to "daddy's shed" (the garage)... I may be evicted from my own man cave! Yikes!

On the upside, she is now showing an interest in tanks "this one shoots at this one - guns pew pew!" which is highly encouraging. A ready-made opponent - albeit one who insists on bandaging up the wounded miniatures after a game....

Anyway, pardon the rather self-indulgent post, and be encouraged to go scrounging your local toy shops - you never know what ready-made terrain you might find...
Posted by evilleMonkeigh at 17:59 2 comments: