We all know how the French and British colonists in the New World clashed over the lucrative dinosaur trade. Dinosaur skins, teeth and other products provided an irresistible lure to those in search of wealth. Dino trappers and hunters roam the wilds, hunting dinosaurs which emerge from the cavern entrances to Middlehiem in the depths of the deep woods of the Ohio Valley.

French and British troops, supported by allied Indian war parties, clash both in the deep woods and in the lost underworld of Middlehiem. 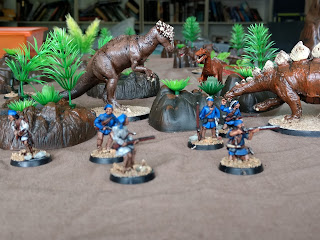 Here some French Compagnies de Marine explore the depths of Middlehiem, staking a French claim on the new lands of the underworld. 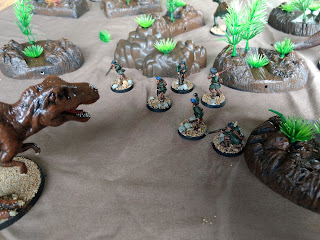 They are countered by Rangers who patrol to protect British interests.  Primitive grenades are effective in deterring larger predators like the Tyrannosaurus rex. 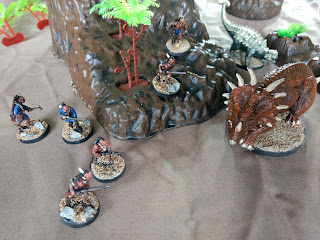 Indians are allied to both sides. They trade enthusiastically for muskets, whose .75 cal stopping power is very useful against larger dinosaurs. I'll need to touch the models up and base them properly, but I aim for "tableworthy-and-painted" as my #1 goal.

I love the French-Indian Wars as they have a very skirmish-centric focus with very different forces (militia, Indians, line infantry, etc). Plus, canoes! What could improve this? Dinosaurs of course!

I actually feel dinosaurs fit well with the hunting-trapping-exploring-the-deep-woods vibe of this era.  What would be more natural than to hunt and trap rare dinosaurs for their skins? 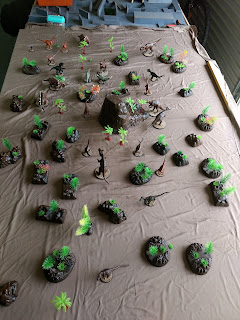 Toys dinosaurs are very cheap. This is two $10 packs of dinos from K-Mart, painted with cheap craft paints. The terrain came with it, and I think it's quite servicable, given the price point...

Again, this is another spin-off of the "lost world/jouney-to-the-centre-of-the-earth" setting of my Middleheim homebrew rules, which one may suspect merely serve as a vehicle for playing with cool toys (dinos ftw!).  I've been forced to make my own rules as the newer campaign skirmish games (SoBH etc) have "missed the mark" for me by adding 101 special rules and dumbing down the campaign aspect; whereas the Necromunda reboots and similar seem mired in 1990s mechanics with few changes.

I'm eyeing off "Aztecs vs Conquistadors vs Dinos" next but sadly my gaming budget is crippled nowdays (two young kids will do that!) so I may have to settle for "Vikings vs Indians vs Dinos" instead, repurposing some of my bow-armed FIW Indians and paint my Gripping Beast vikings (untouched since playtesting SAGA years ago) for earlier battles in the New World.  Or maybe Dinosaurs: The Vietnam War where Vietcong train dinos to ambush US patrols, and then their tunnel system extends into Middlehiem.  Hmmm, is a common theme emerging? Well, at least it isn't zombies....
Posted by evilleMonkeigh at 18:32 5 comments: