The 7 Painting Days of Christmas

While 2019 was a bit of a washout as far as gaming/painting etc was concerned, I did find time in the holidays to get some painting done. I've got unpainted 6-year-old minis dating back to B.D. (before my firstborn daughter's birth) and when my son came along...  ...let's just say the backlog hasn't improved.

In counterpoint, I only bought a few minis in 2019 - I couldn't resist Warlord and their Cruel Sea's 1:300 MTBs (coastal warfare is an interest of mine) on sale and I also got a starter pack of Blood Red Skies while I was at it. A rulebook for 40K Kill Team has yet to arrive.  That's pretty much it. So I haven't been adding to the unpainted mountain.

I continue to tinker with homebrew rules in genres of interest; some are in their 4th or 5th iteration, and were started back in 2015! I''m starting to understand Patrick Rothfuss (*actually, no, he still needs to get his finger out). I may post on this soon.

Anyway, for my first 2020 gaming actions - I decided I'd force myself to paint a bit every day. My offspring see me enough in the holidays so for once I feel comfortable telling them to get lost: "No, you CAN'T help daddy paint - do play with some of that expensive Christmas LEGO or I'll dump it."

On the first day of Christmas, I enthusiastically painted.... 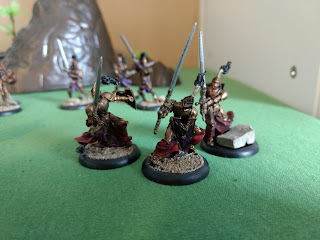 First some Confrontation minis. I've had these for years, picking them up for around $10 a pack back when Rackham was suicidally transitioning from their wonderful metals to hideous plastic. 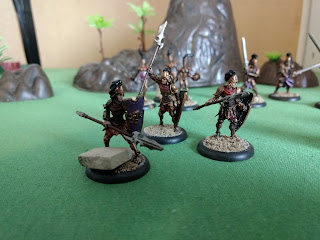 I'm wondering what they would fetch now on the market - I've got all the original unit card, albeit tossed messily into a box. 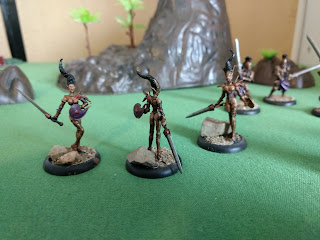 Obligatory butt cheek shot. My 4-year-old always chuckles when he sees them. "Dad they're the nudie-butt ones!" 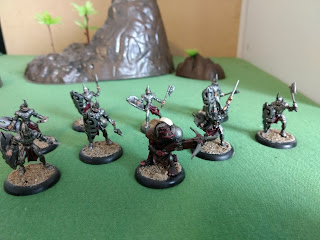 I also found a Confrontation orc I forgot to paint when I did them last year. I always prefer red orcs to greenskins. For some reason I find green cockney orcs ridiculous, while red orcs have a menacing feel like Japanese demons.

One the Second Day of Christmas I rather lazily painted.... 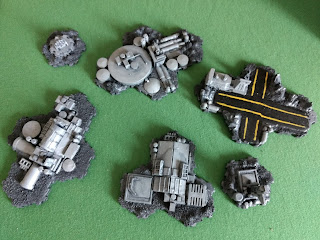 Some terrain (I suspect a pirated knock-off of old 40K Epic terrain) which will go with my Gunship Vector space gunships and tanks.  After my big day, I decided to go for the low hanging fruit.

On the Third Day of Christmas I painted... 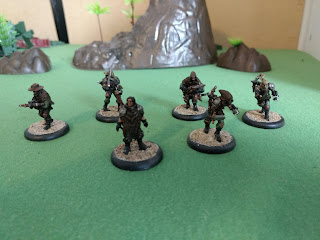 Some Warmachine mercs.  My son dropped one and broke it, and as I was reglueing it without comment, he dropped and broke a second one.  Banishment from my office is apparently a fate worse than death.

On the Fourth Day of Christmas, I painted... 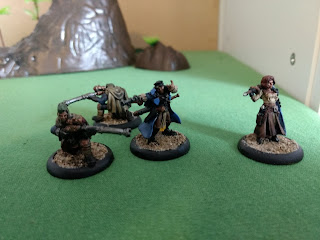 Some Warmachine solos and a few Heroclix. I enjoy slicing up Heroclix and adding different arms etc.  Given I got them for cents each, I can be creative and slice with confidence. I don't understand the guys who kitbash together two $50 GW models.... 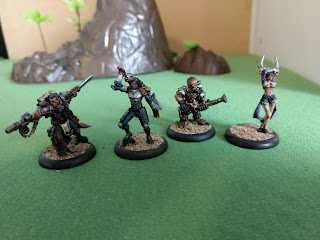 I think some of these may be from an anime-ish skirmish game called Anima Tactics.  I gave it a swerve as the rules seemed dense, but I picked up some models on sale. The dwarf is another clix.

On the Fifth Day of Christmas, I painted (but mostly sliced and kitbashed)... 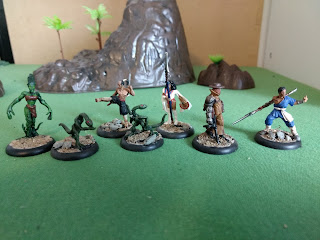 A range of clix, though the lizardmen are Black Cat/Hat I think.  They all got new weapons, courtesy of my Confrontation bitz box. The Judge Dredd villain got a robot arm from AE:WWII. 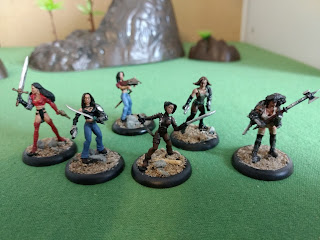 Then, I made a WW2 female monster-hunting cult using clix. My Perry Medieval Men At Arms sprues spares provided weapons and armoured arms. They will accompany my Secrets of the Third Reich infantry into combat to hunt Nazi undead.

On the Sixth Day of Christmas, I painted... 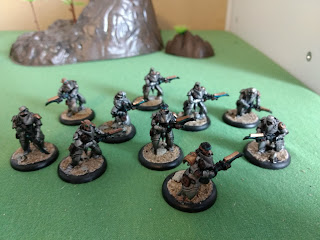 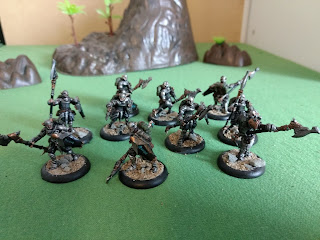 Doing a metallic paint scheme was a bit lazy, as I was not in the mood for painting the usual Scyrah white armour. I think they turned out OK, given the low effort paint jobs I am doing.

On the Seventh Day of Christmas, I only painted... 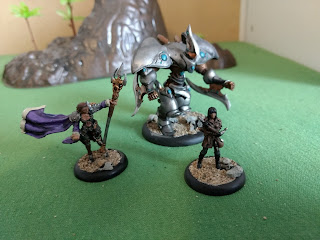 ....Not much, as I was still jaded from doing the Scyrah guys from the day before. Oh well, I've made some inroads on my collection.


The Year Ahead in Painting- I'd LIKE to paint....

- Confrontation - Sessairs (too much skin = pest to shade)

- Confrontation -  Wulfen (lots - these big sculpts are probably quite valuable)

- Warmachine undead (only ~10 Warmachine left, I enjoy painting the chunky cool sculpts) and two heavy Cygnar jacks I picked up on sale

- Warlord French-Indian Wars (some trappers first, then settlers, then a box each of British & French regulars)

- Cruel Seas MTBs when they arrive

- Kitbashing some landships out of 1:700 naval models and tracks from K Mart toy tanks

- Warbands of ECW musketeers (discouragingly too many)

- More platoons of 15mm sci fi (I already have a heap of armies painted, and I'm not enthusiastic about the scale/genre any more)

- Viking warbands (I got them intending to play SAGA, but lost interest as they simply aren't as cool as the Perry medievals)

- My 500+ LOTR minis, bought by the box when they were uncool (in the lull between LOTR and Hobbit). Given a LOT are metals/heroes and I have ents, trolls etc, they are probably worth a bucketload on ebay, but I LIKE the rules and minis, it's just the task is too daunting to attempt..

Anyway, the next post will be about projects.  Due to my inactivity on the blog/DV google group you may assume I'm not doing anything - yet I do some rules tinkering, but I just don't have time to extensively playtest them or write them up.
Posted by evilleMonkeigh at 21:55 9 comments: