Admittedly it's April, but these were finished in March. I've finally got into my Rohirrim horsemen (12) with another ~8 or so to come. These 27 minis bring my total to 316 so far this year.

Yes, I finally painted some Rohirrim on horseback. Not my finest work but gets them table-ready.

Another 10 Easterling foot, a commander and banner. Some Rangers of the North. 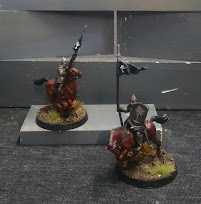 Repaired and painted some Gondor cavalry. Though spear still is shonky...

The longboard deck I painted above alludes to another interest - riding around on planks with wheels. There's a bit of overlap; I've been playing with my 6-year-old son's Tech Decks (toy finger-skateboards at 1:12 scale) and bought my own toy board. He and his sister were offended when I declared mine was cooler than theirs, and retaliated by buying themselves a 5-pack each. Finally, they had a toy collection bigger than Dad!...

...which prompted me to build a real skateboard identical to the Tech Deck toy, proving it's hard to outdo Dad in the toy department...
Painting output has been low in April. I've got Dropfleet Commander PHR & USC boxes semi-assembled. Man, the models are amazing - they fit together so well you can click them together with friction and they stay in place. Some of the most precise work I've seen. Only downside was I've damaged a few when cutting them from the sprues and the castings are so fine you notice the blemishes.
Also sitting on my hobby bench is an Imperialis Aeronautica starter box which I've eyed off but not even attempted. The hex maneuver rules are a bit confusing and I haven't been in the mood to decipher them. Exacerbating this, the models - whilst nice - come in 101 pieces. It just seems like GW wants to justify their prices by making it feel like you bought a model kit. Taking an hour to assemble a single small mini isn't my idea of a good time. Don't expect a rules review or completed model pics anytime soon.
I've also been playing a few  PC games with my kids. Warframe (robot space ninja Jedi) which has given me ideas for a co-op wargame using simple AI, Hunter Call of the Wild - the family that shoots animals together, stays together - and Star Wars Battlefront II (2005 version, of course) being the most popular, although my young son surprisingly prefers slow paced tactical shooters like ARMA3 and Ghost Recon. All are actually pretty decent "Dad" games where old age and cunning tends to outweigh young reflexes, so I'm OK with that!
I have continued to experiment with homebrew skirmish rules; I've simplified The Forgotten by stripping away most of the reaction and activation mechanics. While good rules in themselves, creating lots of interesting decisions, it drew the focus onto positioning and firing lanes, rather than supernatural sci fi horror shenanigans. It was good meaningful decisions, but in the wrong places. As it was, it would have made a good modern spec ops shooter but I wanted faster play, and fewer position decisions in order to focus players on morale and magic management. Currently it's a bit like a super simple Savage Worlds with many shared dice mechanics - which has the benefit of allowing me to port in spells and abilities with minimal playtesting.
Posted by evilleMonkeigh at 04:00 12 comments: