So what is all the fuss about?

A 225 sq.km island of forests, lakes, cities and rivers; endless swarms of fast, hungry zombies, and 50 humans - based on a hardcore military simulator.  With only one rule - survive! 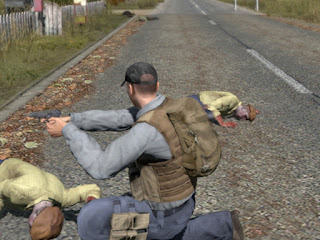 A Day Z shot I lazily loaded off google images. I'll hunt up some of my personal Day Z pics when I am on my home computer.

The Good
"Rocket" the mod designer, has not babied the players.  He presents players with hard choices.

You have limited equipment space and you need to choose what you carry with you carefully (you can create caches of supplies in tents but they can be found and looted by others unless artfully hidden).  Falls create broken bones that need painkillers.  Bleeding can lead to fatal blood loss unless bandaged. Prolonged sprinting can increase hunger and thirst. You never have enough food, water or ammo.

Towns have supplies but are frequented by zombies. Fast, sprinting zombies; not the shambling slow ones. Human players with high-powered weapons can be anywhere - and they would usually rather take their supplies off your still-warm corpse rather than scavenge themselves.  Wise players stay away from the populated coastal areas; and from wide open spaces that can be covered by a sniper rifle.

It rains - you can get chilled and need to take shelter or light a fire to warm yourself.  Eat old meat in your pack - you get sick and need antibiotics.  Want to live off the wild? You would need a hunting knife to skin your prey; a hatchet to chop wood and matches to cook the meat.  It is based on a very hardcore military sim so ballistics and weapons are accurately modelled.

Everything makes sense.  There is no 'contrived' PvP arenas - the towns provided action hotspots but it can occur anywhere. You don't PvP to be top of some leaderboard - you do it to grab their baked beans and water bottles - the precious elixir of survival. All travel is tense.  You are rewarded not by "unlocks", meaningless"skins" and flashing reward messages - but by giving you the bare essentials in life... and the chance of stumbling across that super sniper rifle of your dreams....

There are no levels. The more equipment you have, the more powerful you are - and the more you have to lose. A single pistol round can kill. There are no insta-heal healthpacks. Healing takes time - and food - regaining only a small % of health per meal.

Want a map? A watch? Or compass?  You can have one - if you find it. You start with a blank slate.  This game is hardcore. A single shot can kill. But it is a breath of fresh air from the paint-by-the-numbers shooters (*cough* CoD *cough*) that are spoonfed to the Xbox generation.

Your equipment, status and location is "persistent" - log off on one server, then log on in another; you will spawn in at the same location with all equipment you gathered intact.  There is no grinding. No leveling up.  PvP is always involuntary - to one of the combatants.

Firing your weapon attracts zombies; with limited ammo capacity, sneaking in to loot buildings is usually more effective than engaging twenty sprinting undead in a gun battle. Knowing when to run away is a very useful survival skill.

This is a survival game, not a zombie shooting gallery like Left for Dead. Zombies are not target dummies to shoot apart in scores in humorous ways. They are fast, they are genuinely scary, and if you wish to live, you spend most of your time avoiding them in your quest for supplies.

The Bad
It is very difficult to meet up with friends. Due to random spawns, it might sometimes necessitate a 30 minute hike across the map to meet a buddy.

The learning curve is almost vertical - you start with no map or compass, and unless you cheat by orientating yourself with an online map, expect a lot of aimless wandering around.  In afternoon or morning you can use shadows to guide you but weather is often raining or overcast.

The 24hr cycle means far too much painful night time play blundering around in the dark, banging into trees. Some people report good results by turning their monitor gamma settings up as a sort of quasi night vision but I have had little success.  Flares and torches tend to advertise your presence to human hunters, making night time so frustrating I tend to simply find another server when darkness falls. Reducing the night cycle would encourage me to remain on the server and tough it out.

The lack of rules also tends to cause play to link to the lowest denominator - co operative gameplay is unusual (as betrayal is easy) and most servers have a large proportion of players who want to play "deathmatch" simply hunting other players.   These players tend to live near the coast where newly-spawned, poorly armed victims are plentiful - you can largely avoid them by heading inland.

Installing Day Z is not terribly simple either; but this video is the best explanation I've seen.

The controls for getting out inventory gear and switching out equipment is clunky and complicated; fumbling for a new weapon when a zombie is monging on your arm usually means death.  The UI (user interface) is not terribly intuitive.  Vehicles are not fully implemented in the game and there is more walking than in the Lord of the Rings movies. There is no melee combat, which is a little disappointing, as bludgeoning zombies is always fun.

Remember it IS alpha. A debug screen and console messages kinda hurt the immersion.

The Ugly
Whilst there are some impressive graphic effects,  the game is a little glitchy and the controls are not as smooth as in AAA titles such as the Battlefield or CoD series.  Fighting in buildings is always problematic. The netcode is a bit dodgy and is not designed to handle the sheer numbers flocking to Day Z. However the nature of Day Z means a low fps is acceptable though. Definitely a rough diamond.


TL:DR
A breath of fresh air after the on-rails scripted singleplayer of games like CoD; where you simply follow the path and kill bad guys.  With so many games now "dumbed down" for ADHD teens, it is refreshing to see a game where cunning and patience rule over mindless 'fragging.'

The most innovative game I've seen in a long time.  It generates experiences and stories (check the net for the massive amount of Day Z videos, journals and AARs out there already) rather than shiny "unlocks"  "powerups" and stats. The only "stat" that matters is how long you have survived and the stories of narrow escapes you have to tell. To quote rockscissorsshtogun "A large portion of the internet is now devoted to telling Day Z stories."

It defies genre - a "massively multiplayer rpg/shooter/sim" that can be played with or without as much human contact as you choose. And remember this is only the "alpha" build - it hasn't even been polished to beta level yet.

Recommended? The most interesting gaming experience you can buy for $30; this unique game creates memorable gaming moments effortlessly. Become part of the story.

You need:
ARMA 2: Combined Operations (available as either electronic or DVD; I use the Steam version)
The Day Z mod files
Posted by evilleMonkeigh at 05:26