Despite being a wargamer, I'm not a huge fan of PC strategy games. Too often games focus on building bases and "teching up" your forces. It is almost like competitive LEGO as is more about the units you build then how you actually use them.  Units tend to have a simplistic paper-scissors-stone synergy; and superior numbers "spam" tends to win as there is no bonuses to clever use of cover.

A impulse purchase from a 50% off Steam discount, Wargame: EE has won me over, with its emphasis on tactics over an ability to click your mouse fast on a build menu. 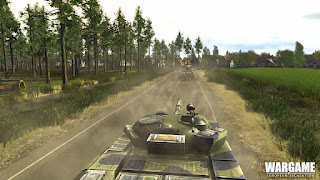 You can zoom in for a tank-commander's eye view of the action...

Simple to Play
Click to move or attack.  That's about all the controls you need to play. On occasion I summon information on a unit; debark troops or order a "fast move" via road; and sometimes artillery need a "force fire" command to blanket a forest. That's it. No special key combos, no macros needed.  Just your mouse and the arrow/WASD keys to scroll the map. You can zoom in and out from strategic mode (with unit icons) to over-the-shoulder range with a spin of the mousewheel.  Units move slowly over the vast battlefield, making advance planning superior to fast clicky-clicky skills. 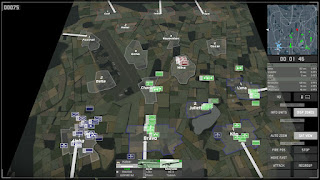 Any of the white-bordered "territories" earns you resource points; but units may only enter the map if you control one of the arrow-marked territories...

No Bases
There are no bases.  You may build a "base" which refuels your forces but it has no offensive or defensive value and is basically a bunch of tents and fuel drums sitting on the ground.

You "control" a map zone by placing a fragile command vehicle somewhere in it.  Like a "King" in chess this unit needs to be hidden well, and defended against deep penetration raids by choppers, fast scouts and airborne special forces.

Resource Management
You don't build refineries to collect unobtanium crystals or neoprene gas; but what your forces DO need is fuel and ammunition.  Supply trucks and transport helicopters are needed to supply your tank battalions with fuel, or rockets to your mighty MLRS batteries.  Taking out or capturing enemy supply vehicles is an important way to weaken a foe. 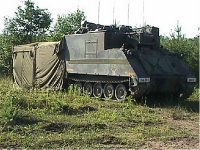 Command vehicles are invaluable for controlling sectors. They need to be hidden and guarded well.

Paper-Scissors-Shotgun
Units are not simplistically balanced to be vulnerable to one and not to another. Expensive units CAN push through any foe - if properly directed on the battlefield. It's more about cost effectiveness than Achilles heel.  And cost effectiveness is situational (and therefore tactical).

Obviously, some weapons are more useful than others against certain foes: a AA battery is a dangerous for to an Apache but far less so to a Leopard tank.  However many units are multi-dimensional.  Many modern IFVs can carry infantry with SAMs or bazookas, and are equipped with solid armour, heavy 30mm chainguns and ATGWs. Properly deployed, they can repel almost any foe.

A single 100-point Abrams heavy tank CAN take out 5 20-point T55s in a front-on long range gun duel.  However if they split up, a single 20-point T55 could take out the Abrams with a shot to the flank armour.  More expensive units should win - but screwups are more costly, and "ideal conditions" are rare. 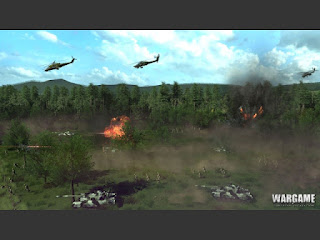 A combined arms approach works well in W:EE; just like in real life....
Level Up
Troops which take part in combat level up; gaining accuracy and defensive bonuses as they progress from rookies to veterans. You can get attached to your troops; like the T90 that killed the 8 Centurions who ran out of fuel near the village at Delta Sector.

Scouts Matter
The map is overlaid by a persistent fog of war - if your units can't see it, neither can you. This is where scouts - with their stealth and huge vision range - are vital.  Managing your scouts (which come in air and ground varieties) is almost a meta-game in itelf; using these small, stealthy units to kill enemy scouts (thus denying enemy their eyes-and-ears), to spot for artillery, to find safe pathways through enemy lines - and perhaps opportunistically raid enemy supply trucks and command vehicles.

Against a backdrop of dozens of super-powerful tanks, it is amazingly how fun it is  to micromanage a small, speedy, machine-gun equipped jeep. And it is a testament to the game design how powerful these weak vehicles are when well managed. 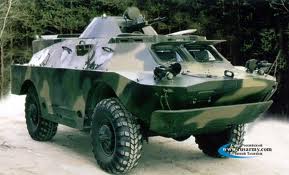 Location Location Location
Infantry in forests or built up areas are incredibly hard to wrinkle out, save with flamethrowers or artillery fire.  A gunship that will chaingun hapless infantry in the open will die to troops as it overflies their forest.

Older tanks without stabilisers suffer massive accuracy loss on the move. Flank or rear armour is usually easily penetrated - you need to carefully manage your expensive supertanks to avoid a costly ambush.

It's not Sci Fi or WW2
Not a Tiger tank or a plasma rifle in sight. Modern RTS combat is one of the few areas which has NOT been done to death. In fact the only similar game is the older World in Conflict; which W:EE surpasses in every way.

It's epic
Zoom down to the level of your tanks and you realise how vast the ranges actually are; your tanks engage pinprick-sized targets at 2000m - almost beyond sight. A rocket salvo obliterating a forest or a swarm of gunships tearing up a convoy in a hailstorm of fire - these are powerful game moments.

Single or Multiplayer
It is designed to be played co op or competitively with your mates. In fact the single player campaign is punishingly hard; unlike most games multiplayer is easier in comparison!  It is easy to find and play with friends.

Also, games are balanced in an interesting way. Resources are important to build your army and replace losses, but it is the first to LOSE x amount of points who loses. So you can lose 10 100-point Abrams and lose the game by miles, despite killing 40 of your foes 15-point T55s at a 4:1 ratio.

This gives even the losing side a fighting chance, even if one side controls most of the battlefield; and tends to encourage caution rather than a headlong tank-rush; scouts are important to avoid a costly ambush.

The trailer typically looks cool but gives you no idea of the gameplay....

Unlocks = Replayability
The gaming industry has learnt well from the pokie industry - people like to be regularly rewarded.  You start with a "deck" of 25 units of various types - command vehicles, scouts, tanks, infantry, artillery, helos and supply vehicles.  Any of these units can be "swapped" for units you "unlock" by competing in online play or completing single-player missions.

Unlockable units tend to be more powerful, but due to the win conditions, they tend to offer flexibility rather than a win-button. I.e. a 100-point Abrams is equalled by five 20-point stock-standard Leopard tanks; and costs a heck of a lot more to lose. As a rookie, cheap, lower quality forces are more forgiving of mistakes anyway.

Choosing your "deck" of 25 units involves some forethought as you optimise your army to best meet your strategy.


TL:DR
Want a simple to play game with lots of depth? Where your tactics and use of terrain and the forces at hand matter, not building new super-units the fastest? Sick of WW2 or sci fi strategy? Wargame:EE is tactics > build queues.  It is a simple game to play but difficult to master due to the naunces between units and the lack of clearcut paper-scissors-stone synergy between units like many RTS games.

Scouting and recon is essential to victory - you can avoid costly ambushes or mismatched fights, and lay traps of your own.  You can call in artillery to rain death on your foes, or cripple his economy by raiding supply trucks and command vehicles.

The "first to lose x points" is an interesting victory condition. Resources allow you to build expensive, mega-powerful units - but but lose more than a few and you lose, regardless of resources. Command units and supply trucks can be raided and makes flanking maneuvers worthwhile.

Choosing the right 25 units for your "army" adds a layer of strategy before the battle, and the game was clearly designed with multiplayer in mind.

Recommended? Yes. Definitely one of the best RTS games out there.  Simple but deep.
Posted by evilleMonkeigh at 08:20