Frostgrave was a magic city, devestated by a warpstone meteorite covered in ice by a cataclysm.  A millennia later, it's thawing out - and warbands lead by wizards are exploring the city, seeking riches and hidden knowledge.  Hunting treasure is important - and is a way to win without "killing em all."

The Shiny
Frostgrave is a hardback put out by Osprey. At $25 delivered it is great value, and good quality.  Easy to read layout, and plenty of Osprey artwork as well as pictures of miniatures.   There's no quick-reference sheet but there is very handy spell cards to keep track of things.  I found no difficulty navigating the book using the table of contents. The rules go for about 40 pages but they're pretty simple - the remaining 70 or so are campaign-related.  Two thumbs up - easy to use and good quality for the cost. 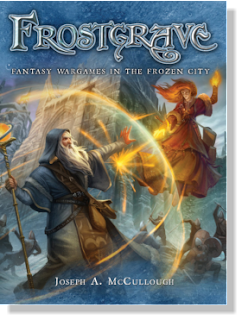 The rulebook is hardcover (surprising for Osprey) and has original artwork and pictures of minis. Glossy, and good bang for the buck.


GAME MECHANICS
Magic #1
In a recent post I was wishing for a game where magicians are the central characters.  Frostgrave delivers.  Your hero is a magician, supported by an apprentice.  There are 10 schools of magic - chromomancer, elementalist, enchanters, illusionists, necromancers, sigilists, soothsayers, summoners, thaumages, and witches.

Each school has its own spells, but wizards can also use other "aligned" or neutral schools (at a penalty) .  Wizards get 3 spells from their school, one from each of their aligned schools, and any two from the neutral schools.  Later in a campaign, experienced wizards can learn and use opposing magic (at a significant casting penalty)

Stats. A straight forward, descriptive stat-line similar to games like LOTR.
Move, Fight, Shoot, Armour, Will, Health. All of which are familiar.  I nodded approvingly. Until I realized "Health" meant "Hitpoints."  Ugh, I hate hitpoints.

Your wizard is your warband leader and primary fighter, but he is ably backed by an apprentice - who uses similar spells and abilties, but simply has a weaker stat line and casting chance. Both can be equipped with items (both magical and mundane.) The apprentice can take over as warband leader in the case of mishaps.

Finally, you can have up to 8 soldiers/thugs/adventurers (of about a dozen archetypes) to 'round out' your warband, and to act as meatshields valued assistants.

Weapons are pretty generic - LOTR-style: 1H, 2H weapons, daggers, bows and crossbows.  Spells, not weapons are the main focus of Frostgrave, so it makes sense to keep them simple.  The "staff" was interesting as it had a weak attack, but also blocked some enemy damage.

Minis get 2 actions, of which the first is movement, and the second can be another move/cast spell/shoot/melee etc.  There are rules for jumping and falling, and "rough ground/climbing" is done at half speed.  Nothing revolutionary here.

Fightin' and Shootin'
Both add their Fight + d20.  The winner then deducts the loser's Armour score to see how many HP the loser lost.  Shooting works the same, only the firer uses his Shoot and the target uses his Fight.  Modifiers are sensible and few. Once hitpoints get to 0, a model is out of the game.  Optionally, a model reduced to 4HP or less can be wounded and restricted to a single action each turn.
Simple, easy and old school. But... hitpoints... grrr.

Spellcasting
Casting is done as an action in lieu of shooting/melee.  The caster must equal or beat the spell's casting number.  If it fails by a large margin, the caster himself can take damage.  Casters can also trade health to "boost" their chances of success - a nice decision point.  Many spells can be resisted by rolling a dice and adding the target's Will stat, to beat the spell roll.

Creatures
These act as NPCs with their own simple rules - they move to attack warband members within 10" or otherwise move randomly.  They add a random element to the game and act as "interactive" terrain of sorts.

In short, these mechanics are notable only in their simplicity. Which is useful if you intend to play a few games in an evening.  A platform, as you were, for the campaign and magic system.   So how do they measure up? 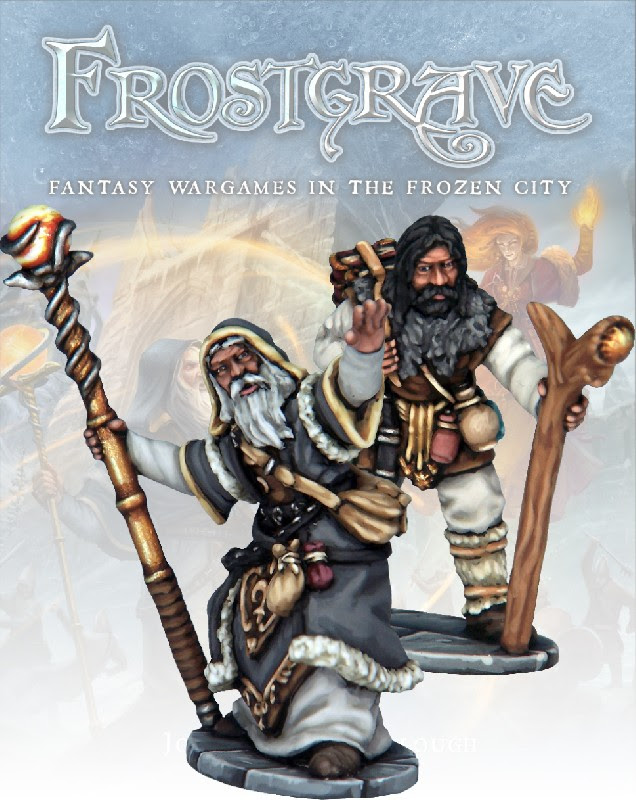 North Star do a complete range of wizards, apprentices and henchmen, though most readers will already have enough fantasy/medieval minis lying around to play...

Given the simple but unspectacular rules, this is the "guts" of the book.

Soldiers do not level up, and casualties either are OK, miss a game, or die for good and need replacing - like LOTR's Battle Companies. Wizards have more complex results - they can suffer from a list of permanent injuries* and lose items they were carrying.   Wizards also level up - earning range of XP bonuses by killing enemy wizards, apprentices and soldiers, recovering treasure and even casting spells (the latter might be a bit of a pain to track).
(*Permanence is relative if your mage is a powerful healer)

Wizards who gain a level (each 100XP) can improve their stats or lower the "casting cost" of a spell.
For each treasure collected and carried off-board, a warband can roll to gain gold, potions and scrolls - even magic items and armour.  Your apprentice mirrors your mage, with a reduced stat-line - which reduces record keeping a bit.

Warbands can establish a "base territory" (sound familiar?) that conveys various benefits, such as improved healing (temple), extra warband size (inn), random scrolls (library).  The base can even be upgraded - perhaps with a cauldron to improve potion brewing, or a kennel to keep a warhound.

There are 10 interesting scenarios, described in detail, from "worm hunt" to "genie in a bottle" "mausoleum" and "living museum."

The bestiary includes ~25 creatures, with a focus on undead and demons but plenty of wild beasts and even constructs (golems, etc) which I thought was a nice touch.  As well as a few weirder ones. Ice spiders, yes... but ice toads don't exactly fill me with fear.

All in all, a very thorough toolbox for those who like a bit of meat on their campaign.

Learning to Spel
This is a game of battling wizards, and there is a solid spell line-up (~80) to choose from.  Whilst many of your spells come from your specific school, you can choose some aligned and neutral spells, giving a decent, well-rounded arcane toolbox.

Let's say you're an Illusionist. You start with three spells - let's say invisibility, teleport and transpose.  You should have great mobility and keep your opponent on the back foot with those.

You choose a spell from each of the aligned schools of Soothsayer (mind control), Sigilist (explosive rune) and Thaumage (circle of protection).

Finally, you select two spells from neutral schools like Witches, Chronomancer, Necromancers, Summoners and Enchanters.  Petrify and Grenade are chosen.

You can't use the opposed school of Elementalism (the flashy gits) so no fireballs for you... yet.

TL:DR
A pretty basic game system is anchored by a comprehensive magic range and Mordhiem-esque campaign system.  I'm not a fan of hitpoints and there isn't any innovative game mechanics, but it does what it says on the box.

Revolutionary gameplay? No. It's pretty basic, to be honest.
Is it the new Mordheim?  No. But it's the closest anyone has come. And that's a recommendation in itself.

Recommended?:  Yes.
Posted by evilleMonkeigh at 03:50