Game Design #47: In Praise of Area of Effect (AoE) Weapons

Area of effect (or template) weapons are widely hated in most videogames.
"Skill-less"  "For Noobs" are some of the comments directed at their use.
They aren't always too popular in wargames either.  It's not fun to have a template placed over a large formation and know your fate is in the hands of the fickle, cruel dice gods.  Artillery alpha strike in Turn 1? Not fun to be on the receiving end.


At a Basic Level
In a game like Warhammer Fantasy (where units are drawn up in prescribed regimental formations) they may merely make another differentiation between skirmish and line troops.
In a game like Lord of the Rings, where you can form up troops however you like, it forces some simple tactical choices.  Do you group up your forces to get more minis into a melee? This makes you vulnerable to AoE weapons.  Do you spread them out to avoid AoE, but potentially weaken your melee potential?   However when templates can be used in Turn 1 to wipe out units before you (or your opponent, for that matter) gets to even activate them... that's not fun.  Simply having AoE weapons exist in your game doesn't mean they add that much to the gameplay.


Where AoE Shines - Reactions
I think AoE starts to shine when target units are allowed to react to the template before the hammer of doom smites them.  For example, you might place the template in your turn, but it only takes effect after or during an opponents' move.

Not only does it remove the impotent frustration of "great, I'm about to be smashed by a template on Turn 1" but it adds some interesting tactics. You might place templates to funnel enemies in particular direction or deny them an area of the tabletop. Enemies may even decide it is better, tactically, to move through/remain in the AoE zone.  Lots of choices, in addition to the differentiation and formation choices I already mentioned.

In Warmachine, one of the autocannon-equipped steam robots has a series of linked blast templates which are laid on the board. It then acts as a kind of "overwatch"in the enemies' turn - enemies enter the AoE zone at their peril.  It can create "no go" zones to protect friendlies from attack or interdict the path of enemies.

In FFTW3, artillery templates can be "moved" (corrected) short distances allowing them to zero in on slow moving units.   Infantry on foot need to move quickly to cover or risk being decimated.

In my Delta Vector homebrew space game, I viewed AoE weapons as an answer to add "terrain" and interest to the rather featureless void; all missiles act as AoE weapons, attacking any ships moving through their (predictable) engagement zone.  As ships (also using vector movement) are also predictable, it means ships at slower velocities may more easily use thrust avoid the engagement zone.  Since high thrust allows you to position your ship better to both launch and avoid missiles, it adds value to high-thrust ships as missile boats and escorts. 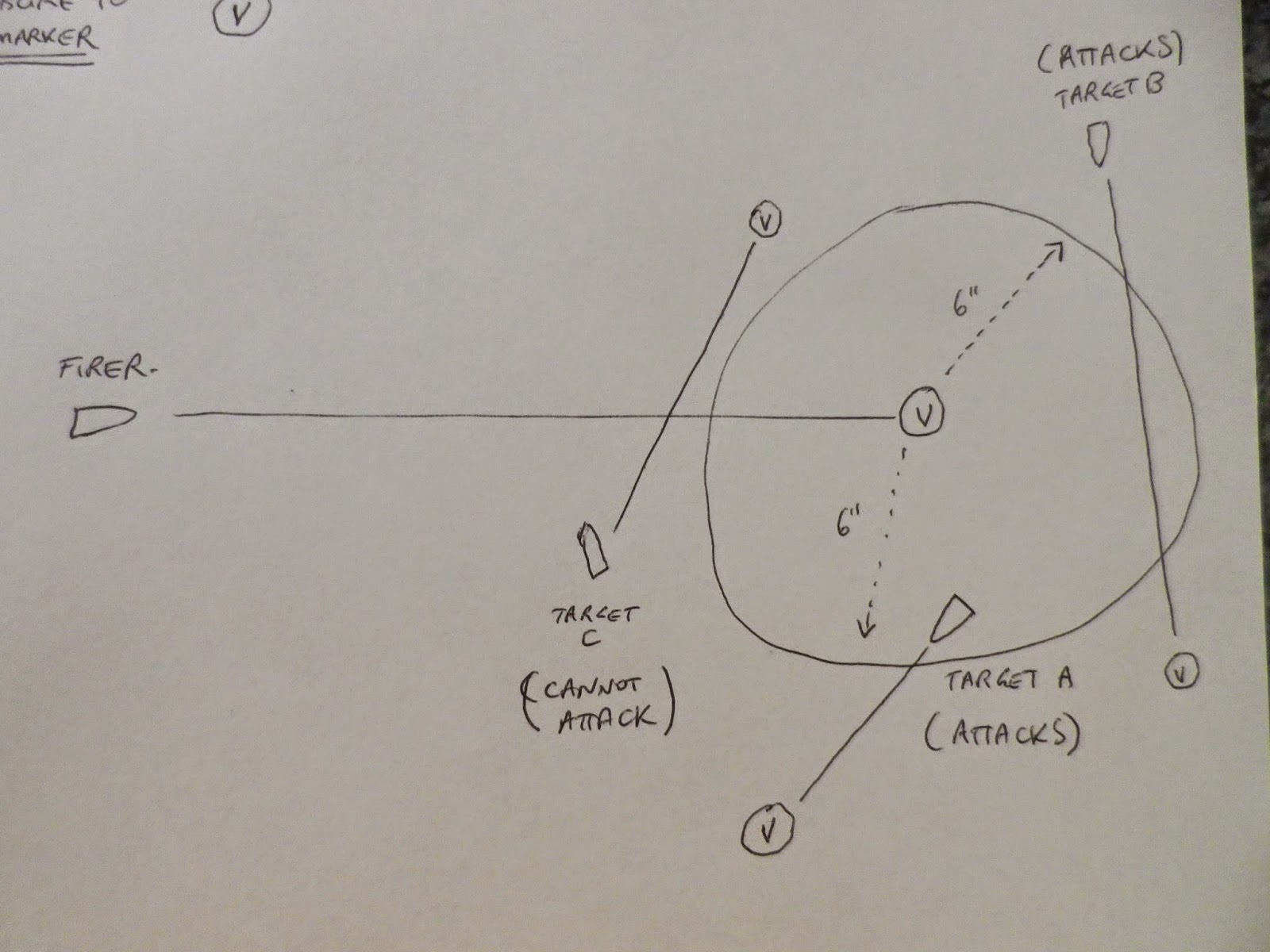 
AoE in Modern Games
As I've been reading a fair bit lately about WW2 battles, I've noticed how most often, fire is directed at a particular terrain feature ("the house on the left"  "the length of a hedgerow") rather than specific targets.

Most times when specific enemies/units are targeted there are
(a) very few targets - i.e. small machine gun crew
(b) there is little/no return fire - i.e. fleeing/surprised enemies
(c) the target is point blank/urban (~50m max).

When I read about battle accounts, much of the description is auditory. It talks about the noise, and "volume of fire."  It seems most small arms fire is suppressive in nature. I recall it was estimated ~10,000 rounds were fired per kill in WW2.  In-depth studies after the war showed only ~15% of soldiers aimed to kill anyone.  Even in the air war, 1% of pilots accounted for 30-40% of the kills. Most accounts by combat soldiers highlight the times they fired on specific enemies (or even clearly saw enemies) as unique, isolated incidents.

AoE weapons did most of the work - artillery/mortars accounted for the majority of US and Germany casualties in the ETO.  I'd argue most automatic weapons can be classed (and were used as) AoE weapons as were, in general, the rifle fire of complete squads and fire teams.

"Pushed them back"  "Pinned them down"  "Kept their heads down" are terms more commonly used then "killed lots of them"- the latter is used more often in conjunction with the results of artillery/aerial attacks.

Area Fire though tends to be more an optional rule in many wargames. You get a choice like: Do you shoot normally or try to "suppress them" with a special "suppression fire"  rule?
I'd argue that "suppressive" area fire is the norm and aiming at specific targets is unusual unless under specific circumstances.  What we call "normal firing" (shoot to kill at small groups/individuals) would be reserved for specific roles, circumstances and individuals (either by training or temperament).

Q: Should area fire in modern game be the "norm" for infantry units rather than an optional/extra rule?

Another thought, is how quickly does it take a (squad+  size) unit to "cease fire"  - maybe area fire must continue for 2 turns before you can switch targets?

Quick Rant: It amuses me when the "Suppressive Fire" rule sounds something like this:
Suppressive Fire Rule:  Cannot do damage, but add extra "pin markers".
I always imagine the squad leader saying "OK guys, switch magazines to nonlethal nerf rounds - that'll scare them!"

Bunching Up - Morale & AoE
I've mentioned this briefly in another post, but apart from not using cover well, something the veteran soldiers hated about newbies was their tendency to "bunch up" and attract fire from AoE weapons like artillery or machine guns.

It would be interesting to see this as part of morale rules - a failed morale roll would see minis move closer together (touching bases?) making them an easier target for AoE weapons.


A quick recap:
*AoE can be used to differentiate between troop types and allow tactical choices
*AoE can give choices (good) especially if you allow targets to react to it
*AoE can act like interactive terrain
*Should AoE be the "norm" in all modern (WW2+) games?
*AoE rules - can we link them to morale and unit cohesion?


Oh, and a quick rant.  I hate, hate, hate "guess the range" AoE template weapons.  Yes, that adds a "skill" but it's a skill a historical commander didn't have.  Artillery accuracy should depend on the troop skill level of the gunners operating them, (abstracted in the same may all other unit fire is done - by modifiers and dice rolls) not the precise estimation skills of the supreme commander of guessing ranges under 6 feet on a table.  Even if we (somehow) convince ourselves this is valid, if we go that route we may as well guess the ranges for every rifle shot fired from each and every mini.  It's nonsense, no matter which way you slice it.


Remember, if you like the Game Design articles, there are more here.  A lot more.
Posted by evilleMonkeigh at 22:15