Setup - a Necessary Evil or Gaming Opportunity?
This is an area, along with morale, that I often don't emphasize much in my reviews.
Basically, it's always the same.
1. Roll for initiative. One side gets to choose the table edge or to deploy his troops first.
2. Deploy troops 12" from your table edge

Now, sometimes the rules are a bit frisky.  They have you alternate placing units.
But the closest they come to "depth" or a "metagame"  is sometimes you take turns placing terrain pieces.  Admittedly in some mass battle games placing your units opposite the best matchup of the enemy is the game, but that's because you're playing a game where battle lines stretch across the table and maneuver is not important. In that case you've got worse problems than setup - the game sucks anyway*. (*Napoleonics' red horse-foot-guns vs identical blue blue horse-foot-guns facing each other in two straight lines is the only genre more boring than Space Marine-on-Space-Marine 40K).

But wait! There are different starting positions in "scenarios" you say.

Ah yes. The obligatory 5 scenarios tacked hastily onto the back of the book.  Let me guess, there will be an "ambush" scenario where one side starts in the middle of the board and the other can start along opposite edges of something like that.  Deep, very deep.

While everyone (except Games Workshop) is finally moving away from IGOUGO and investigating different activation methods/sequences, no one has really done much to revolutionize the setup phase.

Except Too Fat Lardies, who may take a bow.

Now players place "Jumping Off Points" - in a triangle formed by the two closest enemy markers and one of their own.  They must be placed 6"+ back from their own marker, in cover. As I feel my words are failing me, I'll include a diagram: 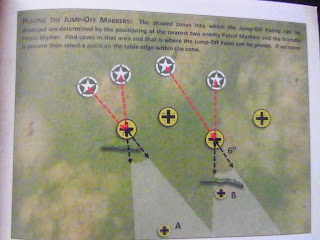 Players then dice to see which troops can deploy.  Better troops can deploy farther from the jumping off point.  You use your "orders" to bring on more units or move the ones you already have on the table.

*The setup is not "paper scissors rock" - i.e. the usual laying out units opposite enemies they best counter.
*There is less "waiting period" to engage enemies i.e. no trundling across the table for several turns before things get "interesting."
*There is uncertainty, and fog-of-war in deployment (i.e. some games you can tell who has won by the time you have placed your last unit, before the game even starts)
*The setup itself is tactical and gives many "decision points" as you manuever your markers to get the best deployment spots.

You can even see how you could fiddle with this patrol phase further to get more depth i.e. units with a scout squad get an extra Patrol Marker or can move the marker 16" or similar.

Another game that does setup quite well is Dropzone Commander. Whilst the mechanics of the game itself are rather boring, it does a great job of integrating a combined arms approach (i.e. dropships+infantry+mechs/tanks+air attack).  It also has scenarios strongly integrated into its play (i.e. I feel scenarios have been considered/designed from the outset to impact playstyle, not "tacked on" later).  Troops start as "directly deployed" on the table, in "readiness" - they can enter any time from indicated table edges; and "in reserve" - they must dice to see when they can enter.  Admittedly this is nothing new either.  But Dropzone Commander, which doesn't have a revolutionary "patrol phase" also does quite well in the setup stakes due to how it integrates its setup with its combined arms games philosophy, and its scenarios which fit with the gameplay style.  In fact I think scenarios and setup are linked - besides that both are somewhat ignored topics.

The Setup - TL:DR
My argument - "setup" is a neglected area in wargames.
*In a "historical" sense you'll know that often a battle was often won by what preceded it
*In a "gaming" sense we are missing out on more tactical choices and "metagaming" potential

Setup can be more than just 'chuck your minis on the table 12" from your board edge.' or 'make sure your pike unit is placed opposite their cavalry.'