It has a completely new "superpower" system which replaces the magic/psychic/weird science generic system from the base Savage Worlds.  This feels more like a genuine expansion rather than simply an expensive PDF list of weapons and vehicles.

Again, I remind you I'm not a RPGer and I view this supplement against its usefulness for skirmish wargaming, which the base Savage Worlds system does quite well.

Heroes
7 new Edges, and mostly useless "hinderances." This section is mostly RPG-y and not terribly useful to my wargaming-centric outlook.

Rules
Besides using all the pulpier optional combat rules from Savage Worlds, there are some new rules, for combining powers, power synergy, finishing moves, and powerful knockback rules for super-powered blows. Degrees of super-strength are defined. In addition, there is a Back from the Dead roll for defeated enemies that mimics how comic characters seldom really die for good.

Gear
Not a huge selection here. About 9 gadgets and a few basic armour types.  The melee weapons repeat those from the Sci Fi Companion.  New weapons are limited and tend to be gimmicks like superpower nullifier beams, foam or net guns.  Not a lot new here.  Vehicles are almost non-existent. Basically, you are expected to own the Sci Fi Companion as well. 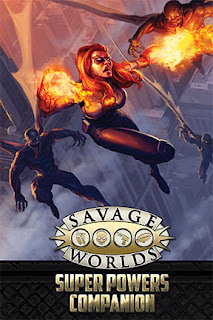 While I ultimately found the Super Powers Companion worthwhile, it could have easily been merged with the Sci Fi Companion, and for the price, probably should have been.  Only the Rules and Powers were useful - the rest was shallow "garnish."
Powers
This is the guts of this supplement.  Powers are assumed to be always on and their costs can be modified by things like activation requirements (touch, delayed activation) or range.

There are about ~80 powers, most with several "levels" of potency. And - yay! - quite a few superpowers that are also psychic powers i.e. chameleon, copycat, danger sense, mind control, and various telekinetic powers, that add to and enhance those in the core rules.

HQ
Again, this may be good for role playing purposes but is utterly useless for wargaming.  I mean, I don't care if my underground base has a kitchenette or two ensuites.  Actually, I don't even know why role players would care, unless they like role playing interior decorators.

Supervillains
There is some generic NPCs - civilians, cops, thugs, and soldiers etc, but a rather large collection of ~70 supervillains.  There's a few recognizable archtypes, as well as variations on legendary and fairytale characters.  They range in power from pulp villains with a gimmicky suit or minor power to cosmic supervillains who can destroy the universe.   This seemed a bit overenthusiastic, to be honest, and took up a disproportionate part of the supplement.

TL:DR
The rules and powers section make this supplement worthwhile, whereas the rest is almost useless for wargaming purposes.  It seems to be designed to be used in concert with the Sci Fi Companion, as both are strong in areas where the other is lacking.  I'd rather they just added the Powers section into the Sci Fi Companion - the rest was just fluff and window dressing.

Recommended: Yes.
The powers and new rules make it worthwhile if you are trying to run a superhero wargame, and they do add value to the base rules.  Although a bit overpriced, it DID pique my interest in superpower skirmish wargaming, getting my attention in a way that the Sci Fi Companion failed to match.

That said, I'd recommend it more confidently when it is half price. I don't see the value in it, when (in my opinion) it's half a supplement, with some fluff.
Posted by evilleMonkeigh at 13:24