I've broadly described the game here but I noticed no real detailed reviews when trawling the internet recently. As this is a potentially excellent game, I'd like to remedy this deficiency.  The game has been around in 2nd edition form since 2000ish... so why haven't more people heard of it?  Glad you asked.

Firstly, how do you make an awesome wargame IP?

#2.  Create interesting mecha and ship miniatures; design the game in the "sweet spot" where capital ships can share the same board with individual mecha or fighter aces (think X-Wing meets Armada)

#3.  Make sensible, innovative rules that allow players to choose their level of complexity, add in campaigns allowing you to "rank up" mecha and fighter pilots, Necromunda-style and run your own fighter squadron.  Have links to a deep RPG universe.

Wow. Sounds great!  Okay, now how do you f**k up such potential?

#1.  Make those cool mecha and ships jarring out of scale. I'm talking X-Wing bigger than a Star Destroyer out of scale. So jarring, few actually want to buy the minis, however nicely they are designed.

#2. If that doesn't put people off, overprice the minis, then toss in such high postage it makes GW look benevolent. (Admittedly, probably not overpriced compared to X-Wing)

#3.  Genuinely don't support the product by not making the miniatures.*  I.e. release data cards for 100s of ships, fighters and mecha classe; then only turn 5% into actual models over 15 years.  That's "lack of support."  Then only do limited production runs where the minis are only available every 6 months.

#4. Finally, for those who don't care about the minis, and think the fluff is awesome enough to forgive anything, change the game's timeline/fluff around several times to put a final nail in the coffin.
Okay, okay, you've made your point. DP9 are retards.  So what about the game review you promised? 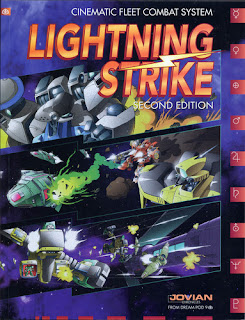 Lightning Strike is one of the best space rules to come out in the last 15 years... unfortunately it is a sad tale of unfulfilled potential
The Shiny
It's pretty solid.  Colour cover and centrefold (which shows minis and modelling tehcniques) and a very detailed table of contents and index.  The art is very good.  The book is divided into standard, intermediate, and advanced rules. The three primary fleet lists (i.e army books/codexes) are included.  Much easier to use than the Heavy Gear rules (admittedly not a high bar to jump step over).  My only gripe is the small text.  At 110 dense pages @ $15 it is a Osprey-like bargain (never thought I'd say that about a DP9 product!)  It also comes with any game counters and markers you need to play for recording damage, lock-ons etc.  At that price it might be worth picking up the Lightning Strike Companion (also $15) which has campaign rules and extra fleet lists (the latter of dubious value sans miniatures).

Stats
Exo-Armour (mecha/gundam), exo-suits (power armour) and fighters work differently than ships and are much simpler, allowing them to be fielded in numbers. These "standard units" have a normal movement and an overboost speed, weapons (with arc/accuracy/damage), avoidance (a too-hit modifier) and defence (a stat that attack need to beat), plus any perks/flaws (yes, it was originally based on a RPG.) which can include ECM/ECCM.   Furthermore, units have an electronics (sensors and comms) and actions (how many actions/attacks they can make).

Ships also have an avoidance (which works differently to fighters - this can spike or drop depending if the ship is firing, using silent running/ECM etc), damage control to repair damage, and also components (turrets, weapon and hangar bays, point defence) which can be damaged individually.

Movement
This cleverly differentiates between mecha, fighters, and ships.  Mecha are supremely agile. During their activation they can be anywhere within their movement radius.  I.e. they could move to once side of a 10cm circle, shoot, then move to the other side before ending its turn. Their facing is fixed only at the end of the activation.    They can "overboost" (i.e. increase their radius of the circle) at a -3 to shooting/actions.  Fighters are faster but less agile; they get a free 90d turn, but halve their movement for any other turns.  When overboosting they are blazingly fast, but may only make a single 90d turn at the start of their move.  While small craft are abstracted, ships turn more ponderously but can move in both their movement and action phases.

Actions
While mecha/fighters use actions for attacking, ships can also use theirs for damage control, extra thrust, and to ping/spoof enemies (light up enemies with active radar or jam enemy targeting).

Combat
Line of sight is only blocked if you are in base contact with something bigger.  Range bands are divided into close combat/short/long.  Most interesting is avoidance - 2300AD fans will like the submarine-warfare feel of this, as ships can increase/decrease their detectability (and thus enemy to-hit modifiers). Firing weapons, thrusting, active radar pinging and laser designators reduces avoidance, whilst cover and spoofing increases it.

Both attacker and defender rolls 2 d6, compare their single highest dice, +/- modifiers, and check the margin of success over their opponent.  This margin of success is the multiplier for damage, i.e. attacker wins 6 to 4, the MoS is 2 - so any damage is x2.

Small units like mecha and fighters are either stunned, crippled (halve stats) or destroyed.  This is very sensible and can be recorded with a token next to a unit. Ships have a more detailed data sheet and can have individual components like turrets blown away. I really like the lack of meaningless hitpoints.

The basic rules are ~30 pages and strike a sensible balance between abstract-yet-interesting mecha and fighters and more detailed capital ships.  There is also rather useful modelling information on how to build asteroids and star maps as well as miniature assembly.  The next 30 pages are intermediate and advanced rules. 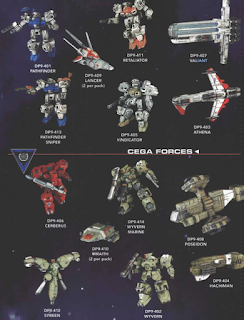 Sadly these are most of the ships available out of 130+ ship designs with published data cards.
The ship in the top right is a carrier of the mecha... ... which are larger on the tabletop....
Even if you do like the weird scaling, they are only randomly available...


Intermediate Rules
These add in a lot of combat options for your mecha/fighters, like evasion, aiming, and reaction attacks (yay!).  Simple vector movement is added for ships, allowing them to drift one way and fire another.  Melee combat gets a lot more fun - mecha can counter-attack and grapple with foes.   Grappling allows the winner to drag enemies, hold them immobile for an ally to shoot(!), or stun them, in addition to simply attacking them.  Command Points are then added into the game, awarded both to the loser of the initiative and at a rate of 1 per 5 units.  These can be used to take extra actions, free facing changes, or defensive bonuses.


Advanced Rules
Ace Pilots with unique skills and perks (and their points costs) allows you to add heroes with Skywalker or Starbuck-esque skills; as well as ECM/ECCM which allows you to alter your ships avoidance levels.   Normal infantry are added and the ability to perform boarding actions, breaching into ships to fight the units on board.

There are also terrain rules for asteroids, dust clouds, debris fields, factory complexes, installations and dense rock fields, as well as rules for fighting in low orbit.  There are conventional minefields as well as cloaking mines.

Finally, there is rules for ramming and performing lightning strikes - abstracted 'drive by' attacks by units off-board, rather like aircraft are used in ground combat games.  There is also some simple campaign rules (as well as four scenarios) regarding resupply and support ships,  using abstract movement and focusing on battles.  There are tables for random terrain, salvage and the survival of aces, repair costs and reinforcement rolls, and campaign roster sheets, as well as an extra nine scenarios.  I say simple, but they are quite detailed compared to most rulesets. However if you love that sort of thing, the Lightning Strike Companion does a Rolls-Royce version of the campaign.


Miscellaneous
The remaining pages are devoted to hardware - perks and flaws - like energy resistant armour or exposed sensors; gear like cloaking devices, and EW (ECM/ECCM) suites.   There are also lots of weapons and their characteristics.  This also elaborates on how weapons work (i.e. point defence can work in standard or shield mode), as well as detailed rules explaining how drones operate.   In addition, it explains the ~30 optional weapons and gear that units (especially mecha) can equip - from advanced sensors and thrusters, to a shield or missile pod or combat claws.

Weirdly, this is where info for launching and recovering fighters/mecha is found, as well as how to "tag" (laser designate) targets for others.

Finally there is the fleet lists - short and sweet fluff explanations about the navies and main combat units of the Jovian, Venusian and CEGA space fleets, as well as special rules specific to said fleets such as weapon and unit availability, morale and any special rules.

There is also a quick reference which summarises key rules, followed by data on ~130 ships...   ...of which about a dozen actually have miniatures.  Grrrr.


TL;DR
(+) Occupies a sweet spot where individual fighter pilots can fly alongside capital ships (most games tend to focus on either solely fighters a la Silent Death or capital ships with fighters as soulless "squadrons" of 6+ - aka Full Thrust)

(+) Campaign system, ace pilots and cool maneuvers - want to stand on the deck of a battlecruiser in your mecha, ripping off turrets with your fighting claws?  Want to grab an enemy mecha and swing him around for an ally to blow his head off? You can do that...

(+) No meaningless hitpoints! Recording is minimal for fighters/mecha (tokens only) and component-based for ships

(+) Rules are well priced and well presented; worth perusing for the ideas alone, even if you have no interest in the game itself

(-) Like Battlefleet Gothic, Lightning Strike is too wedded to its game universe for general use; a generic unit builder would skyrocket the versatility of this cheap and innovative set if rules.

(-) What's the point of having mecha and ships in the same battle when the official miniatures are so stupidly out of scale? Also it's hard to source proxy mecha...

(-) Genuinely unsupported, in the "only 10% of ships ever got a model released for them and there's been no progress in 15 years" and "models available only sporadically" way....*

Recommended: Yes.  Probably the best space rules to come out in the last 15 years, at $15 it is well worth a look, even if you never intend to get the minis.  Poor handling from DP9 prevented this from having the prominence it deserves - a market that was begging to be filled (as evinced by X-Wing/Armada) ....but that ship has sailed...

*Off-Topic Rant: I've talked about supported/unsupported - recently I came across a guy saying "I want to get Dragon Rampant so I can still play with my LOTR minis, since LOTR is unsupported."  Wtf?  Do you still have the LOTR rules? You obviously have the minis.  So if you have the rules and you have the minis, why can't you still play? It's not like GW comes and confiscated your rulebook... How the hell is this "unsupported" nonsense stopping you continuing to have fun with rules and minis you already own...    "I have all the minis and all the rules, but I can't play anymore because GW isn't going to 'support' it anymore." Ridiculous.

Have never produced half the core models and shown no sign of intending to over 15 years - now that is unsupported!
Posted by evilleMonkeigh at 16:59