I may make this as the first of a series of "look back" articles discussing games that are not the "new hotness" or mainstream. Older titles, usually, perhaps OOP or relatively recent games which rapidly faded (or are fading) from view. Remember War Rocket and AE: Bounty?  Mercs? What about Vor? Rezolution?  These are not proper reviews, but more a discussion of the rules.

So what's this one about?

Traveller has as much fanboy-nostalgia as anything with the word Cthulhu in it, and I suspect many readers will also at least be familiar with the "harder"sci fi 2300AD setting.  (Owned by those incompetents at Mongoose - when is Blue Shift being made, eh?)

I've discussed the importance of having a strong design philosophy - what do you want your game to play like? and have you made this clear to the player?  and Star Cruiser 2300 is a great example of this, explaining their approach in the approved fashion (i.e. non humorous, and not getting in the way of the rules). 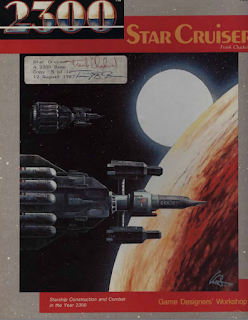 Interesting in concept, 2300AD Starcruiser did not quite live up to my expectations....


I feel a game which focuses on a particular style of gameplay tends to be stronger than a "generic" rule set which attempts to be all things to all people.*   Nothing beats a tool specifically designed for the task. I.e. Swiss Army knives are handy, but if I had to attach a screw or fight for my life, a proper screwdriver set or a K-Bar combat knife would be preferable.
(*In an era where everyone seeks the Holy Grail of "one ruleset to play every conceivable era/genre", this point might be worthy of its own post)

Anyway, back on track. In its somewhat long philosophy statement,  Star Cruiser decides:

The primary focus of the game is getting a targeting solution.  This means the focus is on detecting/locking a target and maneuvering into good positions, with an emphasis on precision rather than volume of fire.   The feel of the game is intended to be similar to antisubmarine warfare or "hide and seek with bazookas."   The primary long range weapons are missiles (of which a limited supply are carried), though fighters and drones make an appearance.  Through ship positioning and angling and detection/stealth opponents try to manipulate the odds to their advantage.

Hard Sci Fi. It deliberately keeps to  relatively "hard" sci fi with one exception - the stutterwarp drive that propels the space ships.  This is not Newtownian movement but a quantum tunneling drive that makes millions of microwarp jumps per second.   The weapons are lasers, missiles or particle accelerators. Submunitions are disposable bomb-pumped lasers.  The "screens" are not magic force fields which block all fire, but electromagnetic fields which absorb 'some' laser energy.  Ships use radars and infra-red scanners.  There is a definite lean towards plausibility.

Detection is vital.  Ships can switch between active and passive sensors - active sensors also "light up" the ship using them.  Ships have sensor ranges at which they automatically spot enemies, which can be extended by their opponents 'signature' which can increase with battle damage, use of shields, and angle to the detecting ship etc.  (I think the upcoming Dropfleet Commander will mimic this?)

Maneuver is important.  The angle of your ship can impact its stealth signature; and maintaining or closing range is key.   Direct-fire weapons are relatively short ranged (a maximum of 2 hexes); in  game where warships move 3-4 hexes and fighters and missiles travel 6+, this 1:1 move:shoot ratio tends to favour maneuver more than many similar space games.

Mechanics.  Movement is 1MP to move 1 hex or change facing.  Weapons hit on 2D6 (+/- crew skill, # weapons in a mount, range, target rating, and weapon accuracy/rate of fire); screens provide a d6 saving throw; however each hit "saved" reduces the screens.  Armour works similarly, only it is halved when the ship takes enough hull damage.  Missiles and drones are treated like mini ships.  There is the usual traditional complicated damage charts and hitboxes typical of most space games ever made. 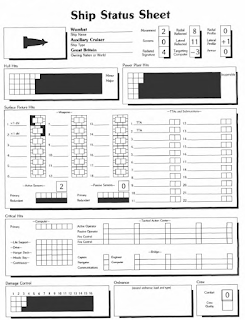 While you can't judge a book by its cover, I DO judge a space or naval wargame by the complexity and record keeping inherent in its "ship data sheets."

......Don't rush out to buy these rules.   Whilst they have interesting design choices and a strong philosophy, the gameplay didn't live up to the promise.  From my hazy recollections of playing it, whilst very '70s' outdated and gluggy, Starcruiser also "fell down" in balance between the Earth nations and the Kafers (who eschew the detection-based gameplay the game was created for and simply had ships with more armour and weapons); stealth was fiddly AND less impactful than it first seemed (or at least, than i expected). (GDW, according to old timers, are notorious for their "playtesting" or lack thereof)  The overcomplicated ship design rules need a math degree. In fact, I reckon the "game design notes" are possibly the most interesting thing about the rules.  The fluff and game universe is excellent though, and this spin off site inspired my interest in high speed fighter submarines (among other things). 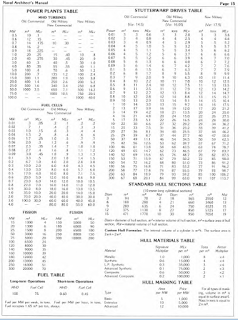 Reading through the ship design rules gave me a mild migraine.

TL:DR  There isn't a moral to this post; just a description of an interesting but flawed set of rules with great fluff and philosophy.  (Although the moral could be: it's all well and good to have a cool concept, but playtest the bloody rules)  They rules will always have a space on my shelf (or HDD rather) due to their interesting nature, but they've got 0% chance of making it to the tabletop....


Re: "Retrospective series" - if there's a old game, be it OOP or just weird and obscure you'd like to see discussed, put a note in the comments.
Posted by evilleMonkeigh at 07:12