The contestants were British destroyers - armed with 6 light guns, and German destroyers armed with 2 medium guns and 3 light guns.  Both had speed 6 (-2 slower than the norm) and were agile (a 60d turn at midpoint and end of turn) and had 5 hull boxes (+1 more than the norm).  Both got a free movement order and gained extra orders on a 6+.

I was mostly interested in the damage mechanics but I messed it up; the German heavy guns should have hit on 8+ and 10+ (not the 7+ and 9+) and this proved very decisive.    On the upside, it shows how powerful the modifiers are, which is good. 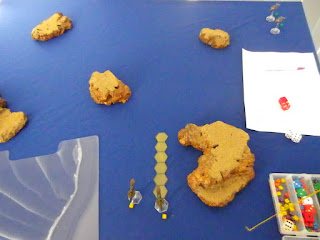 You can see the dice pips denote altitude, but also the colour of the dice denotes the speed - the green dice is flank speed and the yellow is cruise...

The British ships approached at 9000ft at flank speed, while the Germans were cruising at 15000ft.

The Germans won the initiative and moved to "cross the T" of the British, remaining out of range. The British ships got a great order roll; they used another turn of flank speed and climbed level with the Germans.  A mostly ineffective exchange of fire at 4000 yards saw each side knock out a turret. 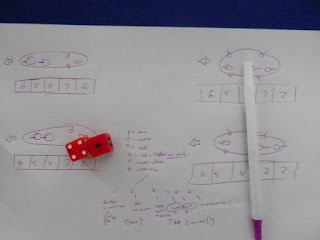 My very sexy ship data sheets; a picture of the ship and a row of hull boxes underneath.  The damage and crit charts are scribbled nearby to remind me....

Now, since both sides were equipped with weapons (light and medium) able to perform reaction fire, I wasn't sure how to proceed so I "rolled off."  The Germans shot first; and since I forgot the -2 modifiers (medium gun vs light vessel) + (target obscured from explosions and smoke of last turn) they scored two heavy hits, smashing the hull of the lead British destroyer who slowed to a half speed and dropped down to 12,000ft, trailing smoke and flames. 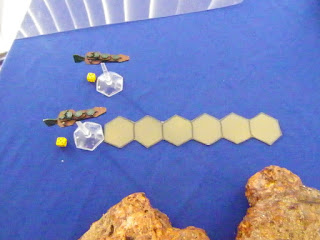 The second British destroyer hauled around hard to heroically "cover" her team mate, while the Germans curved around to keep their heavy turrets tracking the hapless British.  Again forgetting the medium gun v escort penalty, the shielding British destroyer had two guns and two hullboxes knocked out, to no avail; more shots hit her crippled consort, reducing her to 0 hull boxes (and raising the question, what does 0 hull boxes do?  Deciding on the spot it mean "sink 1 level per turn while drifting forward 1"), the Germans took return fire that jammed their rudder.    On an interesting aside, the damage caused a British destroyer to "sink" to 9,000ft and below the angle of the German guns....

At that point I realised I had stuffed up my modifiers and decided to restart.   But there was a few lessons learned....

*I need to check the reaction mechanics; with all light ships there is a murderous amount of gunfire - maybe limit reactions? But that requires tracking who has/hasn't fired.

*Maybe all shots have to take place AFTER all movement?  It may lead to ships "teleporting" past firing arcs unscathed (grrr) but would improve maneuver.

*Basically it denigrated into a murderous brawl once both sides closed to within the magic 4" "close quarters" range as both sides had the agility to stay in range, as well as the reaction mechanics granting extra shots.

*Having only 2 formations meant I couldn't really test initiative rules

*Still no idea how to implement clouds in-game  :-/

*If I had consistently applied my own rules properly, they would have worked far better...  i.e. at various stages I forgot:
- smoke blasts obscuring modifier
- deflection shooting
- medium guns vs escorts
- medium guns in reaction fire
...which could have radically altered the outcome; it would not only prolonged the fight from 4 to 6+ turns and also give the poor British a sporting chance against the heavier German guns....

Verdict: Playtest inconclusive; but game is a "playable" alpha build. A proper test of the shooting modifiers and tweaking of reactions is needed to declare it a "beta." 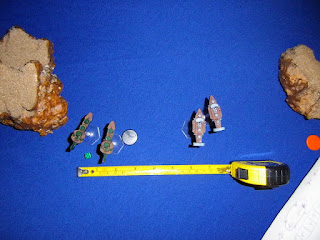 The game did give an entertaining game with 2v2 destroyers, which was good.  They felt like proper ships. I'd be interested to see how fast it plays with practice; my aim is 12v12 games taking 1.5hrs.
Posted by evilleMonkeigh at 05:28