This is the prelude to working on a set of aeronef rules, as per my holiday "to do" list.
(Warning: Wall of text/think aloud incoming)

First, a quick explanation of why I'd bother when Imperial Skies is successfully KickStarted.   This will also serve as my rationale/design notes.

Let's start with what we know about Imperial Skies.  It is elbowing into the partnership with Brigade Models previously occupied by Aeronef.   Now the Brigade Models minis are characterful, cheap, easy to paint and generally awesome.  I've wanted a good ruleset for ages (my thoughts on the original Aeronef rules are familiar to regulars - the words "Yahtzee" "zillion meaningless hitboxes" "exploding d6s" tend to figure in disparaging tones.)

Here's my observations from the rules explanation in the Kickstarter.

Guns come in three sizes - small, medium and large.  This makes sense.  Original Aeronef lumped them all together.  You use buckets of them - e.g. 10 large, 4 medium and 2 light in the example I noted.    They all score the same damage - 1 hit point - and any 6 is a re-roll. Hang on - isn't this the same exploding d6 method as from Aeronef? Why, yes, yes it is.

Original Aeronef has only "light" guns which work exactly the same way as the IS ones.   In both games, dice are halved if you don't fire broadside. Sadly, IS adding other gun classes is a mixed blessing due to the way it is implemented (i.e. guns do the same damage, but bigger guns have a better chance to hit....  which is mixing shell size, accuracy, rate of fire, and turret tracking - three very different things). Basically, little ships get screwed over even more.    And they still have the random 'exploding 6 on d6' roll.

Ships have hitpoints (up to 24 for a battleship in the example).  After you take out a row, you -1 off each weapon dice pool, and off the ship's speed.  Which is not a whole lot different to Aeronef, simply replacing division with subtraction (much more acceptable to today's degenerate gamers as you can do the math on your fingers).

Movement is pretty similar too. Imperial Skies has nifty turning gauges instead of having to measure out when you can turn, but big ships turn slower, and small ships turn faster.  There are five turning classes instead of three.  So adding differentiation as well as speeding up...  good  ....but....  altitude rules are still optional.  So basically, IS waved away a key point when making a game about flying battleships, and relegates itself to be simply, in effect, another poor naval wargame.

What's good.  So - guns and hit points aren't much better than Aeronef, and altitude is again peripheral.  Is there anything to approve of?  Yes.  Command points.  You roll d6 and get that many command points to spend on any ships within 30" of your flagship.  You can use command points to co-ordinate group moves (activation is alternate move otherwise i.e. each side moving one ship at a time), boost ship speed, damage rolls, repair, or initiative.  This was great in Robotech and will doubtless add a great layer of resource management atop Imperial Skies.  Sadly, for me, it feels like ladling delicious chocolate topping onto stale bread. I wanted cake! 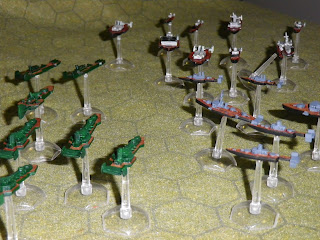 I was cynically expecting Imperial Skies to be a Warmachine clone i.e. sharing mechanisms with Gruntz, in a shiny package.  I wasn't concerned - that's not necessarily a bad thing. Gruntz is a well thought out, well produced game, and has good unit cards and unit builder - one of my recommended 15mm sci fi rule sets.  Instead, Imperial Skies to seems to be an Aeronef clone which doesn't really fix any of the faults of the original and just glosses over them, before waving around command points with a flourish.

TL;DR
From where I stand, Imperial Skies has simply added in range bands for gun types (which are a mixed blessing) and its only major improvement over Aeronef seems to be a command point system which you could easily house rule yourself.   Has it improved on Aeronef? Well, yes, I suppose... but not by much. And that wasn't a high benchmark to jump step over.   I have the greatest respect for Rottenlead's efforts (Gruntz is a great ruleset for 15mm sci fi), and Brigade's minis are awesome, but I'm going to pass on this one.

House Rule Design Brief
So, we've established what I don't want - i.e. more Aeronef, tarted up with command points.  So what do I want?  Given aeronef isn't exactly a wildly popular genre (compared to the hordes of platoon level sci fi and WW2 rules that seem to breed like rabbits) I might make a more determined effort to make my own.

Aeronef Manifesto:
#1.  No meaningless hitpoints.  All hits do something or we simply don't record them.
#2.  12" battleship guns do not accurately track small fast moving targets. That's why ships were equipped with quickfiring secondary or even tertiary guns (see rule #8.)
#3. Altitude is not an optional afterthought but integral to gameplay and tactics.
#4. Crew training is essential to gameplay, as are command skills
#5*. Movement and shooting ranges are low, and ratio between gun range/movement is 2:1 at most.
#6. Ships cannot teleport part each other unscathed.  Some sort of reaction fire mechanic?
#7. Terrain! Clouds, sky islands, weather, mountains, smoke screens. Maybe BFG-esque flak bursts?
#8**. Escorts are not #@$*ed over by the rules. Small ships actually have a purpose and a lifespan beyond the first game turn.

Undecided:
(?) Guns fire by salvoes or individually? We could reduce dice rolls (a la General Quarters 1-2) but dice chugging (within reason) is fun. Also, do we make generic firing arcs? Seems a pity due to the wacky, characterful WW1 gun configurations on the 'Nefs.
(?) Serious or lighthearted?  Should I aim for more "simulation" (I say this tongue in cheek) or go Man O War style.  Or rather BFG style. BFG had a real WW1-in-space feel.
(?) How many ships per side? How much "grit" do we add? Aeronef/IS is 10-30 per side.   Maybe aim more for 5-15?

*The gun range/movement of a WW1/WW2 naval game is skewed radically in favour of gunfire. Ships are slow. Guns shoot far.  I.e. a ship might move 6" and shoot 30".  Shoot/move ratio is 5:1.  As a game design point, it means a ship with a 30" gun range in the middle of a 4x6' table can completely interdict from one side of the table to the other. Gun stats reign supreme. This detracts from maneuver in the game.  How to fix it?  Let's reduce gun range to 8" and  ship movement to 4". Only 2:1 shoot/move now.  Maneuver now matters a lot more - we can skirt around enemies firing arcs and launch flank attacks. I do this for gameplay purposes but we could explain this away as Aeronefs move much faster (100kts not 25kts) and are hard to hit.

**Allow me to elaborate on #8. It is traditional for all naval or space (and even aeronef, apparently) wargames to defecate on small escorts (destroyers, frigates, corvettes - call em what you like) from a great height.   In such games the role of anything small (i.e. less than a cruiser) is to act as ablative armour for larger ships, a distraction or (if lucky) a kamikaze.  Basically, they are Star Trek's Red Shirts. There to die to make the cruisers and battleships look heroic.  Many games, like Imperial Skies, are even blatant about it "The screening rule allows a larger ship to pass off shots that hit them to a smaller ship within 4" if they have allocated a command point."   Great.  So your 24 hitpoint battleship takes 6 damage, hands all of it off onto the luckless nearby escort, vaporizing the escort but maintaining its pristine paintwork.  It's all in a day's job for the 150 crew on board the luckless destroyer.
Given space combat is invariably based on WW1/WW2 naval this makes no sense.  (It might if space games actually treated space as 'space', but that's another rant). Destroyers and escorts would not be the most numerous and versatile class in modern naval history if they had the 90% casualty rate they have in tabletop games. Remember the destroyer Spitfire at Jutland? The battleship Nassau blew away a funnel then rammed it because the battleship guns could not depress low enough.  That's.... pretty point blank. Even then, Spitfire got away.  From memory in the same action about a dozen destroyers charged the entire battle line (i.e. about a dozen battleships) and in some cases could not fire torpedoes because they were within 150 yards.  I think one was sunk...  (the other two damaged collided with each other).  If that was in a wargame it would have been 9-10 sunk and maybe 1-2 getting away... You know it's true.  Anyway, I'd love to see a naval, space or aeronef game where small ships have a meaningful role, and a survival chance that depends on how they are used, not on their stats and size.   I don't care how fast a ship is... if it has 4 hitpoints and rolls 4 dice hitting on a '6' out to 10".... and an enemy ship has 20 hitpoints and has 10 dice hitting on a 5 and 6 to 20".... do the math....

Well, since this wall of text has gone on far enough, and a "game design manifesto" has emerged from among the rantings, I can move on to the making bit.... to be continued
Posted by evilleMonkeigh at 23:29