As usual, holidays began with me getting sick, so H-Day +1 begins today.

First of all, I have to make presentable both sheds.  Both of which have had an entire school term to accumulate mess (primarily thanks to my energetic 2-year old who, unlike her mother, regards them as a 'shared zone') and I have had 0 time to do much with them til holidays (thanks to my now 4-month old, born at start of said school term.)

My last project was using comic heroes for Savage Worlds and creating a kind of pulp-weird west mashup out of Malifaux, Black Scorpion, Heresy and Confrontation metals.  Whilst my gnat-like attention span has wandered in the last few months, I do have a few goals for the next 6 weeks:

Rules
-Work on Middlehiem and incorporate a simple working magic system of 10-15 spells
-Make some aeronef rules (yes, Imperial Skies is coming but I'm not 100% sold) to post on the Google Group
-Work on either SubWar (300kt sub fighters) or Delta Vector (yes, that space game I never finished)
-Adapt some World of Darkness stuff to Middlehiem or similar fantasy skirmish

Game Reviews
-Gird up my 15mm loins and properly playtest Fireteam Andromeda
-Finish and publish the Fighting Sail review
-Maybe review A Formidable Enemy (if anyone cares about another French-Indian War ruleset?)

Google Group
-Game Design Challenge - visitors on the blog vote on a ruleset they want to see made ("company WW2 or ninja rabbit skirmish" etc - anything goes), and the google group must produce a 3-4 page rule set for the genre

Articles
-Why are all aerial wargames cr@p? (OK, I'll use a nicer title)
-Objective based gameplay vs deathmatch
-Resource Management
-What to abstract, and when?
-1:1 wargames (that use everyday rooms as terrain, like Fairy Meat)
-Tables & charts - useful or antichrist?
-C3? I'm supposed to do an article on C3, but I don't play enough games of the sort where people care about it. Anyone want to put their hand up for this one?
-Another follow-up article on solo gaming mechanisms 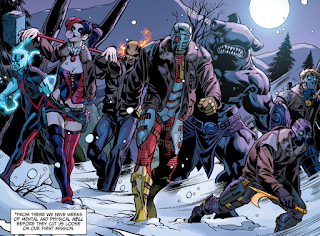 The Suicide Squad comics (with their supervillains working as assassins for the US Govt) inspired many clix to be rebased for wargaming purposes....
Gaming
I don't expect to get away from the house much, so mostly playtesting solo, sadly.
Hopefully some Infinity and Dreadbowl if I get a day to myself.   Play some GQ1 or 3 with my WW1 fleet (I've been inspired by World of Warships); perhaps make some solo mechanics based on recent thoughts as well as ideas from the Google group.

Paint
Basically, since I'm now a poor single-income father of two, I'm trying not to buy any new models (nnng, it's so hard!) but actually make a dint in my unpainted lead mountain.  I've heard rumours if you die with models unpainted they cannot fight for you in the afterlife.  Gasp!

-Paint up all my 1:2400 Tumbling Dice warships so I can do a review of Fighting Sail with pictures
-15mm sci fi. Still lots of lovely models unpainted from when I "went off" this scale/genre.
-Superheroes.  Still lots of clix left.  If lazy I can simply rebase them and wash them.
-Finish the Weird West project
-Finish more SOTR models for Weird War 2 (will work well for testing my homebrew pulp rules)
-Sort out and paint French-Indian War models.
-Pain my Infinity Nomads (then spend days brooding about my painting skill inadequacies)
-Do something with my undead pirates from Black Scorpion. They're too cool to sit unpainted, but annoyingly out of scale with almost everything...
-Put together some more spaceships.  I found a Relthorza fleet and some awesome albeit badly finished Cold Navy by Ravenstar in a box today, so...
-Paint some Quar and do an article on them in order to suck more people into their zany world
-Decide what to do with/how to base my remaining 100 or so metal Confrontation minis (those that aren't being co-opted into Warmachine or Weird West)

Buy//Wishlist (or rather, Wistful list)
Technically, nothing....   ....but I do like 1:300/6mm moderns as they can also be used for near-future/sci fi alongside GZG mechs etc.    Would really like some 1:600 PT boats (my 1:1200 are too small to be fun) but they are just a tad too pricey.   Also like the LAF post apocs which I could easily make into a psy-horror STALKER style game using my Modern Pulp house rules - cool but pricey.  Tempted to buy a bunch of Studio Bergstrom not-Star Wars fighters to show the local X-Wing kiddies you can buy for $1.25 what they pay $15 for.  And as usual, everything by Zombiesmith, who are just quirky and awesome as usual.  I mean, viking teddies? And the rules are actually quite realistic.  I'd like to do a Conquistador-themed game using Aussie Eureka minis (which are -comparatively- less pricey now the USD (and US postage) has got insane) who also have decent Cold War gasmask troops (see post-apoc above).

If you actually read through all that, feel free to comment to vote for the project/article you want to see first, and I'll move it up my priority queue (though it will take a LOT to move assembling the Robotech minis to the top...)
Posted by evilleMonkeigh at 19:56