Regular readers will know I often dabble in World of Tanks (info for raw beginners here and beginners-wanting-to-be-decent here).  Whilst designed by Russian gangsters who utilize a painful grind and not-so-cheap "freemium" free-to-play model it is a great "dad" game - old age and cunning beat youthful reflexes and the 5-10 minute rounds means the wife will actually believe you saying "just 5 more minutes."  You don't need to chug a case of Red Bull to be twitchy enough to compete - you can relax while chatting and playing with your friends on programs like Teamspeak using a mic.

With the start of the holidays I've embarked on one of their newer games - the not-so-inventively named World of Warships. Same theory - a deathmatch (or capture-the-base that inevitably becomes a deathmatch) with a dozen or so on each side, last ship standing wins.  As usual as an Aussie I've favoured the NA server over the Asian one (I distrust the Singapore-Australia undersea line as I prefer slightly higher ping over packet loss).  Also, I dislike being abused in Filipino.

Bear in mind these are "first impressions" - from low tier play.  That said, given the commitment in game time the game imposes to get beyond the "low tiers" this is a valid review as it is as far as most people will get before either giving up or deciding they love it. 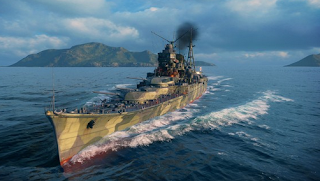 Everyone loves tanks with big guns. Warships have more. Size does matter...


The Good
It's got WW2 ships.  How many games allow you to command a Kongo battlecruiser?
It's shiny. There's a thrill as the funnels belch smoke as you order the ship to full power and bow waves push away.  A bubbling torpedo wake (friendly or not!) always inspires a momentary jolt of terror.
It's somewhat realistic.  Ships have a satisfying momentum, and turrets take a while to track onto targets.  For a ships to have a pool of hitpoints does not seem so silly as it does for a tank.  It feels more like a genuine battle than an arena deathmatch like its tank cousin.
It's easy to play.  WASD to steer. Mouse to turn your turrets and shoot. SHIFT to zoom in. Voila, you can now play Warships.
It's fast to play.  Rounds are longer than WoT (usually 10-15min) but should not aggravate the wife.
It rewards planning.  Due to ships innate momentum and the ranges involved, you need to think 20-30 seconds ahead.
Different ships, Different flavours.  Destroyers are agile, sneaky and can launch deadly torpedo attacks and cover allies with smoke screens. Cruisers are flexible all-rounders.  Battleships are lumbering but powerful behemoths.  Carriers are for people who don't actually like ships and prefer to play air traffic controller on a minimap.
Low Tier = Useful.  In WoT, being a Tier 3 in a Tier 5 game meant you were just cannon fodder for higher ranked vehicles. In WoWS, lower tier ships still seem viable.
Mostly Historical. 90% of warships were actual warships.  Unlike WoT, where 90% of tanks are BS wishful thinking paper designs that never even made it to the prototype stage. But wait, they haven't done the Soviet Navy yet? In that case, brace yourself for 1980s Kirovs vs Bismark duels.
It's free. Yeah right. Unless, of course, you want more than 8 ships. Which you will. Or you want to play at beyond Tier 7, which is fine with me because if you've played and progressed that far it's fair you pay something. Or you don't want to have to play a ship you dislike for five hours to get to the next one which you DO want.


The Bad
The grind.  To unlock new and better ships you are stuck with having to play dozens (later on, sometimes hundreds) of games with the preceding ship - even if you don't like it.  I estimate the grind is 2-4x worse than World of Tanks.  No, I'm not joking.
It needs more ships.  Only IJN and USN are represented well, though there are some Soviet destroyers and German cruisers. I'm pretty sure the Royal Navy and Italian Navy were both comfortably bigger than the Kriegsmarine and Soviet Navy and I'm confident that the former was at least as large as the IJN.
Less Opportunity for Skill than WoT.  Yes, I'm new to WoWS but while it seems to favour tactical planning, there seems to be less ways for player skill to impact the game. In WoT, a good player could sidescrape, hulldown, angle armour, and aim at weakspots as well as use terrain and cover.  In WoWs, dodging and launching torpedoes was the nain new skill, and the shots seem more "random" (i.e. dependent on computer Random Number Generation - aka RNG) - than skill, without even an indicator to show how your actions impact accuracy etc.
It's very slow....  I know slow is good for us old guys, but it sometimes takes frustratingly long to get anywhere in a 20-knot boat. The battle sometimes takes a while to warm up.  A 10 minute game is good, but not if 8 minutes is jockeying to get into combat range. WoWS almost crosses the boundary into "too slow" - thank goodness for destroyers.

Verdict:  If you love WW2 warships, and the IJN and USN in particular, absolutely try it. It's atmospheric, free to try, and simple to play.  That said, don't get your heart set on a Tier X, like, say, the Yamato - it will take you literally thousands of games of playing nothing but a certain ship type.

Hey, this wasn't on your list of articles for Christmas period!  What is this PC gaming crap?!
Suck it up - it was already written before my to do list.  Also, the wargame-pc gamer crossover bracket is relatively popular.
Btw, is anyone interested in a beta review of the new PC Game Mordhiem? It seems to be very X-COM-meets oldschool Mordhiem in nature, and has now got is campaign system in place.
Posted by evilleMonkeigh at 12:35